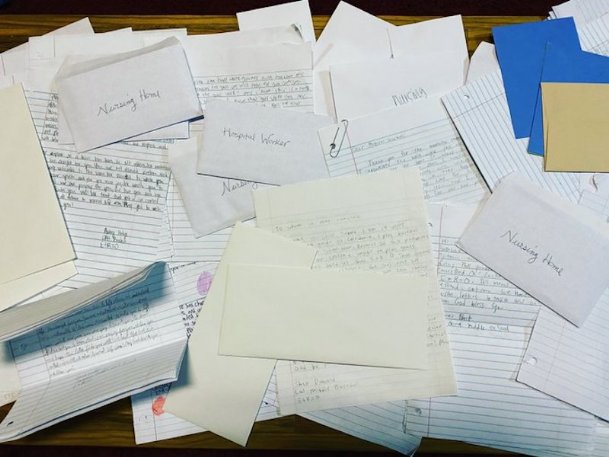 The Caledonia Middle School baseball team's 23 players turned in over 130 letters to be sent to Baptist Memorial Hospital-Golden Triangle and the Trinity Health Care Center. "It was overwhelming to see how many," coach Brad Haines said. Photo by: Courtesy of Brad Haines/Twitter

Caledonia Middle School baseball coach Brad Haines isn't always sure what to expect when he issues a directive to his players.

Consequently, Haines wasn't sure what to expect Saturday night, when he asked the Confederates to write letters to health care workers at Baptist Memorial Hospital-Golden Triangle and to residents at the Trinity Health Care Center, an assisted living facility in Columbus, in the midst of the COVID-19 coronavirus pandemic.

Would they only write one letter? Would they turn in two sentences? Would their handwriting even be legible? Haines didn't know what to expect.

What he got blew him away.

Players and their parents handed off their letters to Haines on Tuesday afternoon, while he was weed-eating at the baseball field. He put them in his truck, and when he got home and spread them out on the table, he couldn't believe it. With the help of interested family members, his team's 23 players had combined to produce more than 130 messages of support.

"I was like, 'My gosh, look at these letters,'" Haines said. "It was overwhelming to see how many."

Shep Donald, an eighth grader and a team captain, said he wrote six letters -- five to Trinity residents and one to Baptist staff.

Donald recalled his words to the hospital workers: "'Thank you for everything you've done.'"

"They probably want to be home with their families right now, but they can't," he said. "We're praying for you and thank you for everything that you've done and just know that your work isn't going unrecognized."

"I think it will impact somebody's life who wouldn't normally get stuff like this," Black said.

While some 'Feds asked to type out their letters, Haines encouraged his players to write their messages by hand -- not always an easy task for younger students but one they pulled off nicely.

"That handwritten letter, it just shows that you took the time and the effort to make it a little bit more special," Haines said.

Some players' relatives helped decorate the letters; seventh grader Jack Mullins even went the extra mile by inserting a card with a baseball on it into the envelope he turned in to Haines.

"We just thought it would be a nice thing to do: give these people some hope and happiness and put a smile on their face," Donald said of the team's effort.

The eighth grader had earned a call-up to Caledonia's ninth-grade team, but he and the middle school team didn't even get to play a single game before their season was shut down indefinitely.

"It is really hard because baseball is my life and it's part of the culture here, and it's just a really fun thing to do," Donald said. "It's a little bit hard, but it's life: You've gotta get over it."

To do that, Haines said, it went back to an exercise he implemented before the season. He handed bags of coffee beans to bewildered players, explaining that the seed is unique: Rather rather than becoming too hard or too soft when dropped into a pot of boiling water, it shapes its new surroundings for the better. That's what the coach wanted to see in his players, too.

Haines had seen his players take the message to heart well before the pandemic began and the letters were written. One player sat down next to a student sitting alone at lunch and ate with him; another bought tennis shoes for a classmate who couldn't afford them at Christmastime.

In the template he laid out for the letters, Haines mentioned one of his team's mottos, engraved on custom-made wristbands he ordered the very day Caledonia's season was put on hold: E + R = O.

One of Donald's letters, for example, applied that concept to his team's suspended season amid the pandemic.

"'We cannot control not being able to play baseball right now, but we can control how we respond, and our response as a team has been to try to lift others,'" his letter read. "'We want you to know that we're praying for you, and I hope this letter finds you well.'"

For Haines, Donald's words were just one example of a point that became clear as Haines pored through the letters on his table: His players were up to the task he had given them -- and then some.

"They took it and ran with it," Haines said.