Analysis: Who could replace Vic Schaefer as the next women's basketball coach at Mississippi State? 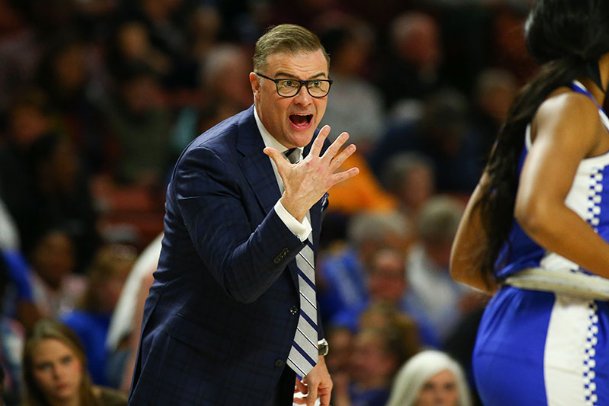 With women's basketball head coach Vic Schaefer off to Austin to become the next head coach at Texas, Cohen will now be tasked with replacing a coach who reached two national title games, three Elite Eights and boasted the best winning percentage in school history.

The process is also sure to be affected by the worldwide outbreak of COVID-19, which could limit MSU's ability to bring potential candidates to campus.

That said, here are a handful of potential replacements for Schaefer:

Matthew Mitchell checks every box Cohen should be looking at. Now entering his 13th year at Kentucky, Mitchell has guided the Wildcats to three Elite Eights and five Sweet 16s in his tenure.

Mitchell also boasts strong ties to the Starkville area. A Louisville native, Mitchell attended MSU as a student and began his coaching career at Central Holmes Academy High School in Lexington and Manchester Academy in Yazoo City before becoming a graduate assistant for Pat Summitt at Tennessee.

One complicating factor with Mitchell is that he's already making $1.26 million annually meaning MSU would likely have to reach the $1.5 million mark to begin discussions. That said, Schaefer was set to make nearly $2 million over the remaining time on his contract according to a source with immediate knowledge of the situation, so Cohen has been willing to make the investment in the past.

It's also worth noting Mitchell brings back reigning Associated Press first team All-American Rhyne Howard to a squad that finished the 2020 season 22-8.

The real pull for Mitchell -- as Austin was for Schaefer -- is a chance at a homecoming in a place that others have won big. If Cohen can swing this, it's a home run hire.

If Schaefer doesn't bring his entire staff to Austin, Johnnie Harris is the most likely to earn a head coaching role either at MSU or in the near future.

Harris and Schaefer's relationship dates back to their time as assistants at Texas A&M and she was among the first people he brought on board when he landed the MSU job.

Harris has done wonders with MSU post players in recent years -- most notably 2019 No. 3 overall pick Teaira McCowan -- and has proven to be an ace recruiter in over her over two-decade coaching career.

Harris wouldn't be the splashiest hire on this list, but having been the associate head coach in Starkville for the past eight years she would bring a strong continuity to the program.

At just 48 years old, McGuff has been a Division I head coach for 18 years -- including stops at Xavier and Washington before landing in Columbus. In that time his teams have reached the NCAA tournament 11 times and reached three Sweet 16s and one Elite Eight.

McGuff's time as an assistant at Notre Dame and Miami (OH) would also help continue the national recruiting base Schaefer has built in Starkville.

Whether Cohen has a sour taste in his mouth from the Lonestar State remains to be seen, but if he does dip back into Texas for Schaefer's replacement Tina Langley would be a valid choice.

Langley has guided the Owls to back-to-back Conference USA regular season titles and helped Rice to its first NCAA tournament appearance since 2005 last season. She was also the quickest coach in program history to reach 100 career wins in 2019.

And while Langley has only been the head coach in Houston for five years, her resume is littered with ties that make sense at MSU.

An Alabama native, she was previously as an assistant at Toledo, Georgia and Clemson. Langley then worked under Brenda Frese at Maryland for seven years before landing the Rice job.

She did sign an extension through the 2024 season, though MSU would be a staunch upgrade from a mid-major program.

I'll lump Stephanie Norman and Sam Purcell together because both boast comparable resumes and are on the same staff at present.

At the base level, both Norman and Purcell have SEC ties. Norman -- the elder of the two -- has been at Louisville for 13 years but spent six seasons at Vanderbilt prior to that. As an assistant in Nashville, she helped the Commodores secure the No. 1 recruiting class in the country in 2003.

As for Purcell, he's a 2003 Auburn graduate and spent five years on staff with the Tigers in varying roles. A dogged recruiter in his own right, he helped land Asia Durr at Louisville and Kaela Davis at Georgia Tech -- the No. 1 and 2 recruits in the country in their respective classes.

Both Purcell and Norman are due for head coaching gigs and their recent work helping establish Louisville as a national power has only aided in their quests. If MSU goes the assistant coaching route, both make plenty of sense in Starkville.

Other names to watch: