Mississippi State's Robert Woodard II jams on and off the court 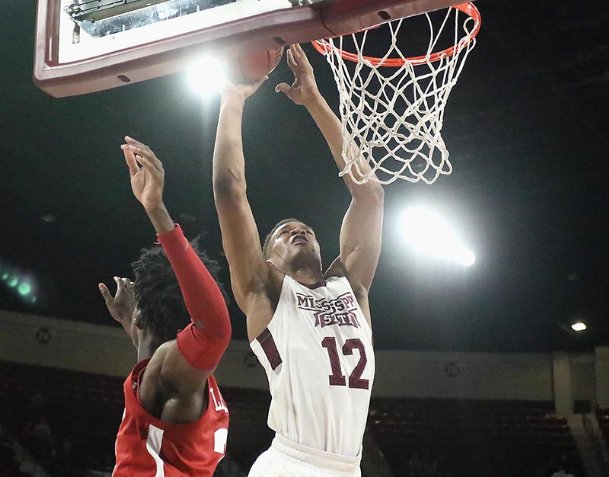 Mississippi Stateâs Robert Woodard II (12) dunks ahead of the defense from Alabamaâs Kira Lewis Jr. (2) during the first half of their NCAA college basketball game on Feb. 25 in Starkville. Photo by: Jim Lytle/Dispatch file photo

STARKVILLE -- One of the most under-the-radar musicians in the Golden Triangle splits his time between Columbus and Starkville throughout the year.

He enjoys performing renditions of Sultans of Swing by Dire Straits or Prince's iconic Purple Rain. Despite keeping a relatively low profile when it comes to music, this Columbus native might consider starting a band with his friend once they both feel comfortable.

He also might be selected in the NBA draft next month.

The valedictorian of his graduating class at Columbus High School, Woodard II has always been regarded as a highly touted basketball player. A four-star recruit, he elected to stay home and play for Mississippi State. After completing his sophomore year with the Bulldogs, Woodard II very well could be the first Columbus native taken in the NBA draft since Sedric Toney in 1985, with one mock draft slotting him as high as pick No. 23.

But he's far from just a talented athlete. Music has always been a passion for the 6-foot-7 forward. In elementary school, Woodard II was a vocalist in several school plays. He sang at the talent show in Columbus Middle School. The drums were "his first love" according to his mother, Velma Woodard, who said he began playing in middle school. He turned his attention to the keyboard in high school, then to the bass guitar his senior year.

"I was in choir in high school," Woodard II said. "(Columbus director of choir Dr. Paul Browning) was able to play the guitar, so I just asked for a couple sessions in class. I just took it and ran with it."

After practicing a few times, his love for guitars only grew. His father, Robert Woodard, bought his son his first guitar in high school.

"He'll see something and will go, 'I like that.' Eventually, he gets his dad to buy it," Velma said.

Three years after his first lesson, there are now seven guitars at the Woodard household.

The consensus on Woodard II's musical talent depends on who you ask.

The elder Robert Woodard has slightly higher standards for his son.

"I'm a fan of Prince, so I think he has a long way to go," Woodard II's father said with a laugh. "But of course I'm proud of everything he does. He has played for the church a couple times, and I think he's a fine musician in his own right."

And yet, even some of those closest to the Columbus native haven't confirmed his musical prowess for themselves quite yet.

"Only a handful of people really know I play," Woodard II said.

Some of his college teammates, including senior Tyson Carter, haven't had their own private concert yet.

"I have heard that he can play, though," Carter said in early March. "I've never heard it myself. We have to get him to do it soon."

Other teammates have been exposed to Woodard II's guitar riffs. Associated Press Southeastern Conference co-player of the year Reggie Perry was Woodard II's roommate freshman year. Not all seven guitars made the trip to Starkville.

"He had like three guitars sitting in the room," Perry said. "He used to play all the time. He's pretty good; he's really talented."

That's about where Perry's memory stops at Woodard II's musical prowess, though.

"I think I told him I told him to play a (certain song) one time, and he did. I can't remember what it was, though."

After three years, the student transitioned to the role of teacher. Mississippi State student Kortland Jordan, who just finished his junior year of college, has been taking bass guitar lessons from Woodard II since April of 2019. Jordan, who serves as a practice player for the MSU women's basketball team, has known Woodard II since their days in the Jackson AAU circuit.

"He let me borrow one of his guitars for a few weeks," Jordan said. "Whenever he has some free time, we'll just play some music together. He teaches me about the chords and how to play the music. A lot of the time, we'll FaceTime and I'll ask him, 'How do you play this or that?' He'll explain it to me, and then we work on it the next time we can meet.

Since learning the bass, Woodard II has shifted his attention to mastering the lead guitar. One day, probably in the distant future, he and Jordan have hopes of forming a band together.

"That's all down the road. I gotta get my guy right on bass first," Woodard II said with a laugh. "Then I'm going to have to get a drummer. Once we set all that, I'll let you know."

That was news to Velma.