Breaking down the budget: How Mississippi State's athletic department is preparing financially for an uncertain year in college football 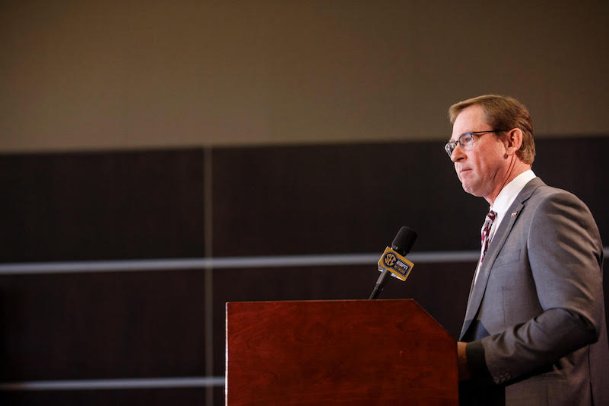 STARKVILLE -- With the COVID-19 crisis ongoing, Mississippi State athletic department officials are preparing for the upcoming school year and its athletic endeavors with a semblance of caution given uncertain circumstances the coronavirus pandemic has brought with it.

"There are so many factors involved with putting together a budget," MSU Athletic Director John Cohen told The Dispatch this week. "And, again, it's not perfect, but what we've been able to do over the last several years is we have been able to put resources away at the end of the year for situations like what we're dealing with right now."

Following the standard process it does each spring, each of Mississippi State's 14 sports -- the minimum allowed to be an NCAA Division I member -- submits a proposed figure and breakdown for what they will need funding-wise. Once that number is passed to university Chief Financial Officer Eric George, among others, it's factored into the larger overall athletic budget relative to what the school made in revenue the year before.

George -- who joined the MSU athletic department in April after nearly five years at Clemson -- noted that previous budgeting models have been turned upside down as exact plans for the college football season remain cloudy, though the school is not anticipating it will have to dip into reserve funds or have to cut or furlough any athletic department employees at this time.

"Football obviously is paying for pretty much everything that's going on here," George told The Dispatch. "So we'll look at it and we'll say, 'Hey, we expect our revenue to be, whatever, $125 million.' Now we need to make sure that all of our expenses -- whether it's salary, debt service, operations, travel, recruiting -- all that needs to fit within the revenue that we have."

Among the major question marks surrounding the return of college athletics this fall is whether fans will be allowed in football stadiums and to what degree.

In one of the first precautionary moves in Division I college football, Iowa State announced Tuesday it does not anticipate selling single-game tickets and that only those with one of 30,000 season tickets would be allowed entry to the 61,500-seat Jack Trice Stadium.

On a more local level, a drop in fan attendance would be a major hit to an already poorly funded MSU athletic department -- one that, according to the USA Today database on college athletic department funding, operated at the smallest budget of any school in the Southeastern Conference not including Vanderbilt during the 2017-18 school year.

The simplest measure of a limited fan experience comes in ticket sales. According to records obtained by The Dispatch, $14.2 million of the nearly $17 million in ticket revenue MSU reported to the NCAA during the 2017-18 school year came from the Bulldog football program -- a number that equaled almost 14 percent of the school's total athletic department revenue. Thus, if Davis Wade Stadium is limited to just 50 percent or 25 percent capacity this fall, the MSU athletic department could take a hit of up to $10.6 million.

Other football-related revenue that could take a hit should limited attendance be implemented is merchandising. According to documents obtained by The Dispatch, MSU reported just over $2 million in revenue from program, novelty parking and concession sales during the 2017-18 school year. Of that, $1 million came from football.

MSU also reported $12.55 million of its $15.89 million in media rights revenues that were allocated to specific teams came from football. Therefore, if the season were to be truncated due to a second wave of COVID-19 this fall or winter, a hit would likely be felt -- though to what degree or if at all remains to be seen.

At present, the Southeastern Conference and MSU are full steam ahead toward an adjusted football season this fall.

The SEC announced on May 22 that student-athletes could return to campus for in-person voluntary workouts beginning June 8. Multiple sources told The Dispatch earlier this week that 2020 football recruits are expected to arrive on campus in late June before beginning classes the first week of July as well.

For Cohen, George and a number of other MSU administrators, it will fall on them to curtail whatever financial impact an irregular fall on the gridiron will entail.

"We're not sure what the football season will look like, what the fall's going to be," George said. "But we do know that no matter what, there are going to be some things that will come back down a little bit. So we've done that, and we've balanced the budget based on that."