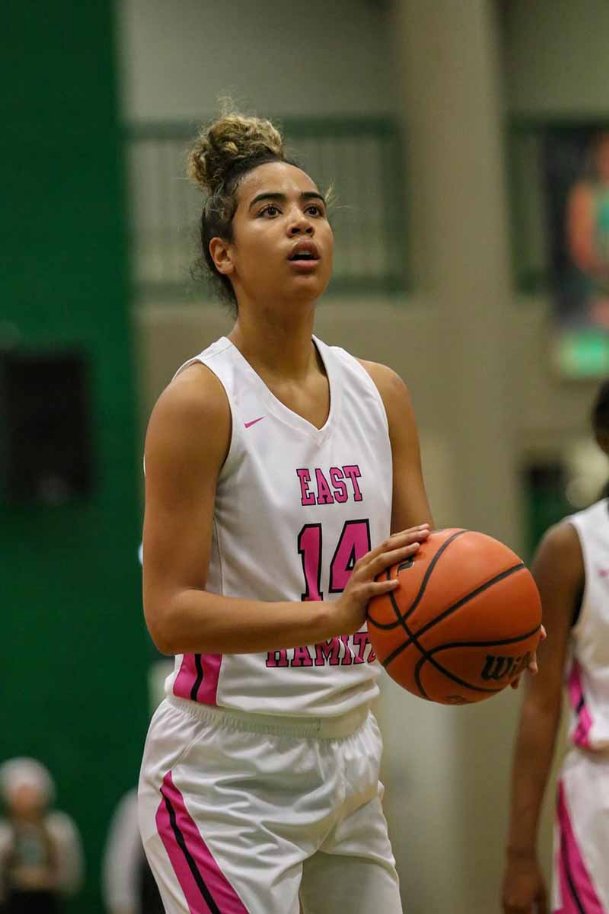 Madison Hayes became the second McDonaldâs All-American to ever sign with Mississippi State out of high school. Sophomore guard Rickea Jackson was the first. Photo by: Photo courtesy of Greta Miles Hayes

STARKVILLE -- KN'isha Godfrey snagged a writing utensil and a sheet of paper. With a flurry of swift strokes, she began scribbling her thoughts.

Having just stepped off a Zoom call with Mississippi State head coach Nikki McCray-Penson, the chat had reached a deeper level than most. "Who are you?" McCray-Penson asked Godfrey in a theoretical sense.

Thinking through her answer as the call ensued, Godfrey felt inclined to write down her answer as she tried to come to a consensus.

"I write down my goals and stuff, but when she asked me who I am, it made me want to go and write about who I really am," Godfrey told The Dispatch. "And right off the bat I'm like, 'OK, something's up. This lady right here, she might be the one.'"

Announcing her commitment to MSU on Friday via Twitter, Godfrey became the second major recruiting coup for McCray-Penson and her new staff after previously maintaining five-star 2020 guard Madison Hayes' pledge on May 26. And while each player brings a unique skillset to Starkville, it's the relationships they've built with McCray-Penson and her staff that will land them in Northeast Mississippi in the coming months.

Since Vic Schaefer's departure to Texas in late April, Hayes' commitment to MSU has remained a focal point of concern amongst those inside and out of the Humphrey Coliseum. The No. 28 player in ESPN HoopGurlz's 2020 rankings and a McDonald's All-American, the Ooltewah, Tennessee native had the option to back out of the National Letter of Intent she signed in December given the coaching change. She didn't.

Instead, Hayes spent the better part of the last few months hearing from McCray-Penson and her future teammates about the program and what the new staff would bring to Starkville.

They spoke about basketball, sure, but conversations between Hayes and McCray-Penson, in particular, ran deeper. They discussed Hayes' aspirations and her hopes to one day work in the broadcast booth -- an industry McCray-Penson boasts ample contacts given her long and successful professional playing career. Life after basketball wasn't just a cliched tagline in their dialogue, it was a legitimate discussion.

"I really wanted to play at Mississippi State and when (Schaefer) moved it made me kind of uneasy," Hayes told The Dispatch. "But I feel like once I got to know and gave coach (McCray-Penson) a chance, I think that helped a lot."

For Godfrey, there were similarly deep discussions that danced through her weaving conversations with the Bulldogs' first-year head coach.

Chatting in a recent Zoom call with her future head coach, an inquisitive Godfrey asked McCray-Penson about her time playing for famed Tennessee coach Pat Summitt and why she was the right coach for her. McCray-Penson offered a candid response.

"Honestly KN'isha, I just had this feeling in my stomach and it was just different," she said.

Recalling her previous handfuls of conversations with McCray-Penson, Godfrey was hit with comparable butterflies from the Volunteer-turned-Bulldog. Her commitment soon followed.

"I realized that the first two or three conversations I had with Nikki (McCray-Penson), she made me feel this feeling in my stomach," she said. "I felt different."

Rated the No. 24 guard and No. 93 overall player in ESPN's 2021 rankings, Godfrey will bring a gritty toughness to the MSU back-court when she arrives on campus for the 2021-22 season, while Hayes should be an instant-impact scorer this fall alongside rising sophomore guard Rickea Jackson at the No. 2 or 3. And though both stand to make major impacts in their first few seasons in Starkville, it's the growing relationships between them and McCray-Penson that have helped make their future successes in the maroon and white possible.

"I believe that people make where you're going," Godfrey added in reference to McCray-Penson. "If the people are great, then it'll make your experience great."