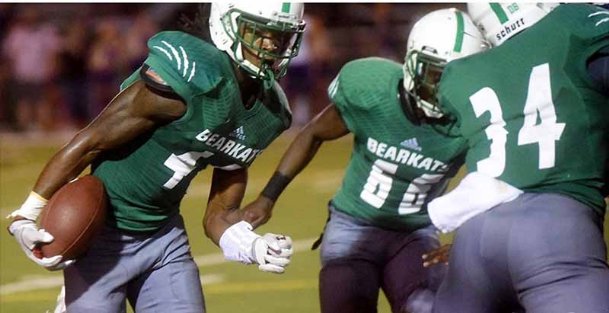 As a junior, he was the lone track athlete at Bossier High School to qualify for the Louisiana High School Athletic Association boy's class 4A championships. The Bearkats would finish eighth in the team competition.

On the basketball court, his speed helped him move with ease up and down the floor, intercepting passes and rebounding on both ends. Aided by his hops that earned him a second-place finish in the state in the high-jump, he corralled 12 rebounds his first district game back on the court and helped his squad to a 3A state title in mid-March.

But where Richardson has most made his presence felt most is on the football field. A four-star cornerback according to 247sports, the Cullen, Louisiana native is among the biggest late risers in the class of 2020 and was one of the final additions to Mississippi State's incoming freshman class.

"You never have to worry about him," Bossier High School basketball coach Nick Bohanon told The Dispatch. "He's going to do the right thing. Whether you were there or not watching him do his reps or whatever, he was going (to do them)."

As the fall unfolded Division I teams began sniffing around the 6-foot-2, 176-pound defensive back. Central Michigan was the first to offer in early October. Tennessee, South Carolina and Mississippi State followed in the next month-plus. So too did Louisiana and Houston.

With the high school season winding down, Richardson set visits for Starkville and Knoxville on back-to-back weekends in December. Checking in with previous coach Joe Moorhead's staff and finding a familiarity with the town and surrounding area, he committed to the Bulldogs a week later -- four days after returning from his visit to Tennessee.

"See I'm a country boy and that there's country," Richardson said of Starkville through a laugh. "And I liked that."

While Richardson signed his national letter of intent on Dec. 18, his future at MSU remained a waiting game. His grades were enough to academically qualify, but an outstanding test score left him in limbo. Anxiously awaiting the result, Richardson was informed of his passing score after his initial commitment.

"They still stuck with me through all of it and so it was pretty easy for me to choose Mississippi State," he said. "...It was a big relief that I had qualified and everything was good."

Entering a depleted secondary, Richardson fills an immediate position of need for the Bulldogs. With the departure of Jarrian Jones to Florida State and the early exit of junior stalwart Cameron Dantzler -- now with the Minnesota Vikings -- depth at cornerback has quickly become a concern.

Preparing himself for the impending competition, Richardson has spent ample time running hills and enduring footwork and speed drills on a nearby beach volleyball court. Comparable to the sandbox Leach and his staffers have used for resistance training since their time at Texas Tech, it's helped Richardson build on his already impressive speed.

The ongoing COVID-19 crisis has also afforded him an opportunity to run through film with safeties coach Jason Washington -- one of his primary recruiters after Leach's staff took over. Mimicking the scheme Richardson ran in high school, he's quickly taken to the new system.

And while there will be ample competition upon his arrival at MSU, those who have seen Richardson's athletic acumen on display aren't concerned as to whether he'll stand out. Rather, it's a matter of when.

"He's got elite speed," Bohanon said. "You've got guys that are fast in high school. He can make them look like they're running backwards."