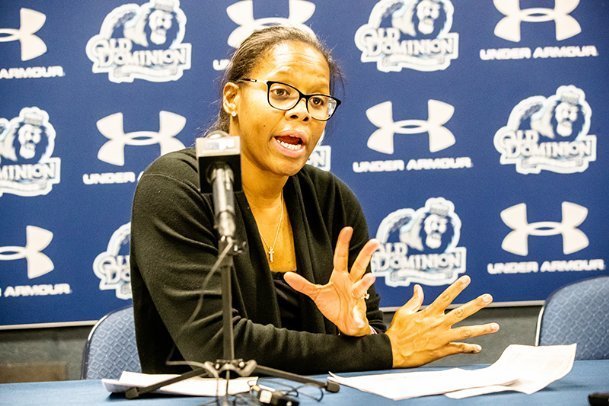 Nikki McCray-Penson is entering her first year as the head coach at Mississippi State after three seasons at Old Dominion. Photo by: Keith Lucas/ODU Athletics

STARKVILLE -- Nikki McCray-Penson's first schedule as the head coach at Mississippi State is rounding into form.

According to documents obtained by The Dispatch on Tuesday, MSU has signed contracts with Southern Mississippi, Belmont, South Dakota State, Troy and Division II program Christian Brothers University (TN) for games during the 2020-21 season.

Most notably, MSU will play a three-game series against Belmont that will span from the 2020-21 season to 2022-23. The Bulldogs and Bears will meet in Starkville on Nov. 12 and at a yet-to-be-determined date during the 2022-23 season, while MSU will travel to Nashville during the 2021-22 regular season.

MSU will also partake in a home-and-home series with South Dakota St. over the next two seasons.

The first game of the series -- which will mark the first ever meeting between the Bulldogs and Jackrabbits -- is set for Nov. 19. A date for the return contest in Brookings, South Dakota during the 2021-22 season has yet to be announced.

This season, MSU will also travel to Hattiesburg on Dec. 12 to take on a Southern Miss squad it defeated by 33 points at Humphrey Coliseum last year as the second leg of a previously arranged home-and-home series.

Home games against Christian Brothers and Troy will then take place on Nov. 6 and Dec. 14, respectively.

According to the records obtained by The Dispatch, MSU will pay $20,000 to Belmont for their three-game series. Troy and Christian Brothers University will receive $25,000 and $3,000 for their respective contests this year.

Of those opponents revealed in the documents, four of the five Division I teams MSU will face ranked in the top 75 of the RPI last season, with Southern Miss (No. 212) as the only team outside that range. Troy, South Dakota State and Belmont also all won at least 22 games during the COVID-19-shortened 2019-20 season.

Christian Brothers -- which played its only ever game against MSU on Dec. 12 1992 -- finished its season 11-13 and participated in exhibition contests against Division I opponents Memphis, Austin Peay and Murray State.

Having previously announced it will partake in the Hall of Fame Women's Challenge along with UConn, Quinnipiac and Maine coupled with its rotation out of the SEC/Big-12 Challenge this year, MSU should have as many as eight games left to schedule to match the 14 nonconference games it played during the 2019-20 campaign.

MSU will enter the 2020-21 season after finishing last year 27-6 -- including a run to the Southeastern Conference Women's Basketball Tournament championship game.

The Bulldogs were previously rated as the No. 3 team in the country according to ESPN's Way-Too-Early Top 25 for the next season as they'll welcome back second team All-SEC performers Rickea Jackson and Jessika Carter. MSU also recently solidified the commitment of 2020 five-star recruit Madison Hayes -- a move that helps fill the voids left by the graduation of senior guard Jordan Danberry and the offseason transfers of freshman guard Jayla Hemingway (West Virginia) and junior forward Chloe Bibby (Maryland).

McCray-Penson became the eighth head coach in school history following Vic Schaefer's sudden move from MSU to Texas on April 5. She previously spent three years as the head coach at Old Dominion where she compiled a 53-40 record, including a 24-6 mark and a No. 33 finish in the RPI.