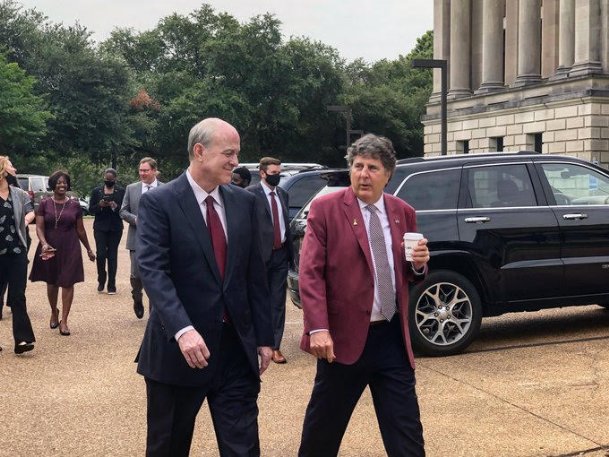 Recalling a moment that helped spark removal of the rebel flag from South Carolina governmental buildings, McCray-Penson was again thrust into the forefront of the Confederate flag debate, this time before the Mississippi Legislature.

"I know for me personally, it just warmed my heart because South Carolina was moving forward," she told The Dispatch of her experiences in Columbia. "And it changed the landscape of our team and the players that we were able to recruit. As you know, we became national champions. South Carolina became more attractive."

As MSU's newest coach offered words of support for the change, Ole Miss men's basketball coach Kermit Davis spoke from his experiences as a native Mississippian. Offering insight into the recent NCAA announcement that schools in Mississippi would not be allowed to host postseason events of any kind until the Confederate flag is removed from the state banner, he explained why now is the time for an edit.

"I had a meeting with our team the other day, and I could feel the hurtfulness in our locker room, confusion in our locker room because they want change," Davis said prior to the joint press conference. "They're getting outside pressure from peers. It's the right thing to do. Mississippi needs to have a flag that is great for all the citizens in our state. Mississippi needs to have a flag that is right for all our students in state and all of our out-of-state students and student-athletes when they come on our campus."

In one of the more lighthearted moments of the day, Leach snapped new Ole Miss head coach Lane Kiffin's protective mask against his face to a chorus of laughs. Beyond the comic relief, the pair of first-year football coaches also offered major name recognition to those athletic department officials in attendance.

For Leach, the day offered a chance to speak on senior running back and Columbus native Kylin Hill's stance that he will not play this season until the state flag removes the Confederate banner in its top left corner.

As of Thursday, the debate to change the state flag remains an ongoing dialogue in Jackson. Given the deadline to introduce new legislation has passed, a vote to suspend rules -- which requires a two-thirds majority in both houses -- must happen before any bill is allowed to be introduced. Should that occur, Republicans are expected to author a bill that would replace the current flag with a newer model that does not bear the Confederate battle emblem, which would then need a three-fourths majority in both houses to pass.

Speaking with the Dispatch on Thursday, Rep. Kabir Karriem (D-Columbus) and Rep. Cheikh Taylor (D-Starkville) both noted that a vote on suspending the rules could occur as soon as Thursday, but was more likely to be headed toward the weekend. Sen. Chuck Younger (R-Columbus) also told The Dispatch via text message he expected to be in Jackson into the weekend.

And while the MSU, Ole Miss and other respective university athletic departments from across the state lobbied the Legislature in unity Thursday, Davis quipped there will be no love lost when they appear on the court, field or diamond when allowed.

"When we leave this place, we'll want to beat each other's tails for sure," he said through a laugh. "But I promise you this: We're all united in this. Every university, every college, every coach is all united for this. We know how important that it is."