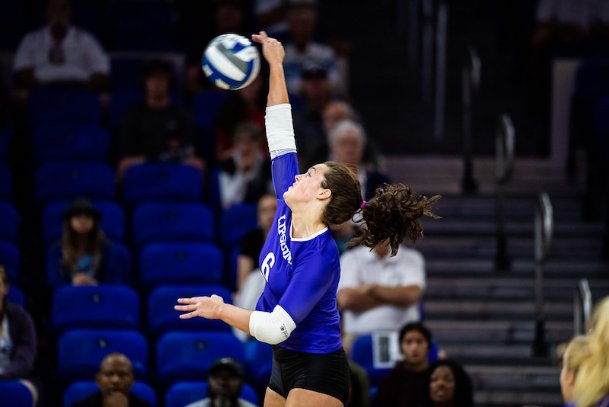 Outside and right-side hitter Lauren Myrick is joining Mississippi State for her sophomore season this fall. The Lipscomb transfer is the Bulldogs' ninth incoming player and fourth transfer of the class. Photo by: Courtesy of Lipscomb Athletics

The Mississippi State volleyball team continues to add new players to the mix for its 2020 season.

On Monday, the Bulldogs officially announced the transfer of Lauren Myrick, who spent her freshman year at Lipscomb in 2019. Myrick is immediately eligible to play and will have three years of eligibility remaining.

As an outside and right-side hitter at Lipscomb, Myrick had 177 kills and 84 digs in 29 matches in her freshman season last year. She helped lead Assumption High School in Louisville, Kentucky, to back-to-back USA TODAY national championships.

"We are excited to welcome Lauren to the family," Mississippi State head coach Julie Darty said in a news release. "She has played for three highly respected volleyball programs since the start of her prep career.

"Lauren is a competitor," Darty added. "She is driven, she is tough and she is a great volleyball player. Her experience at a variety of positions will add depth and confidence to our team immediately. Having someone with her versatility in Starkville is huge, and we are just so excited for her arrival."

Additionally, former Arkansas transfer Logan Brown is now eligible to play for the Bulldogs after sitting out last season.

Myrick initially announced she would transfer to Mississippi State on her Instagram page June 15.

Mendizabal played her past three seasons at Texas-El Paso, earning first-team Conference USA honors her junior season with a 71.6 stroke average. The Guatemalan golfer finished in the top 10 six times and never shot above 75.

"It's not too often a player like Val comes up in the transfer portal," head coach Ginger Brown-Lemm said in a news release from Mississippi State. "She is a seasoned international competitor, brilliant student and has dominated her time in the college ranks with her team's MVP award and an under-par 71.6 stroke average. She fits with who we are as a program and university, and we couldn't be more thrilled to add her to the family."