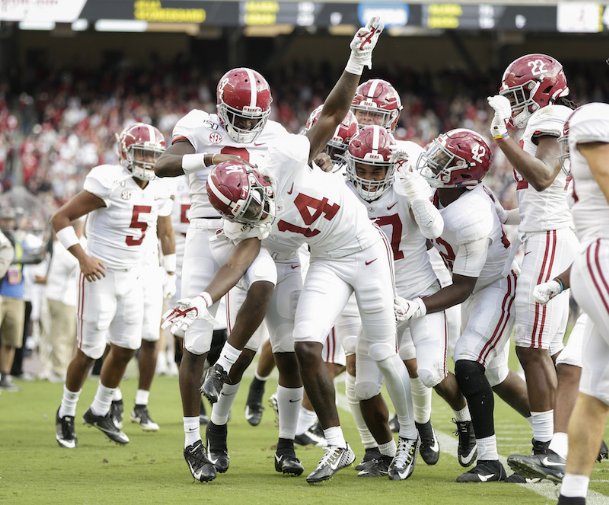 Alabama wide receiver Tyrell Shavers celebrates after picking up a Texas A&M blocked punt for a touchdown in the second half at Kyle Field on Oct. 12. Shavers announced his transfer to Mississippi State in June and is poised to help the Bulldogs on the outside right away. Photo by: Erich Schlegel/USA TODAY Sports

After a slew of injuries and a brief split between baseball and football slowed his ability to shine on the gridiron at Alabama, the former top-100 recruit is slated for a major role at Mississippi State this fall should the season go on as scheduled.

"We are excited to add a tremendous talent like Tyrell to our receiving corps," MSU coach Mike Leach said in a news release in June. "Tyrell graduated from the University of Alabama in three years and has two years of eligibility remaining. We look forward to welcoming him to Starkville as we prepare for a big season ahead."

Committing to MSU on June 8, Shavers instantly became the Bulldogs' tallest receiving threat, standing 6-foot-6 and weighing 205 pounds. And while his sample size at Alabama was small -- one reception for 20 yards and one carry for 14 yards last season -- there's reason to believe he'll thrive in coach Mike Leach's air raid offense.

When he played for Lewisville High School in the greater Dallas area, Shavers' high school numbers suffered as much from poor quarterback play as the double- and triple-teams he saw on a weekly basis. Never one to get too high or too low, Shavers boasted a generally calm demeanor despite the errant passes he saw throughout his prep days, finishing with 27 receptions for 397 yards and seven touchdowns as a senior.

"If he could get to it, he was going to catch it," Shavers' high school coach, Gregg Miller, told The Dispatch. "Our quarterbacks we had sometimes threw it out of bounds or threw it onto the bleachers, but he was definitely a kid that everybody that we played, you better find a way to cover that kid, or he's going to beat you."

Despite middling quarterback play during his time at Lewisville, scouts took notice of Shavers' long frame -- so much so that he was rated the No. 88 player and No. 12 receiver in the 2017 class according to 247Sports' composite rankings.

Committing to Alabama in June of 2016 ahead of his senior football season, he joined the Crimson Tide as a January enrollee. Despite that, Shavers was often buried behind 2020 first round picks Henry Ruggs and Jerry Jeudy in addition to potential 2021 first round picks Jaylen Waddle and DeVonta Smith during his time in Tuscaloosa.

And while Shavers' opportunities at Alabama were limited, his athleticism was on constant-display. A two-sport athlete at both the high school and college level, he spent a brief time playing for the Crimson Tide baseball team before turning his focus entirely to football this past spring.

"He's always been well spoken about how Alabama was," Miller said. "He didn't leave angry. He just wanted to go play as far as he told me."

Joining a Mississippi State receiving corps in desperate need of playmakers, Shavers fills a major need on the outside. MSU has graduated four of its top five pass catchers from a season ago; senior Osirus Mitchell is the lone returner who saw meaningful action for the Bulldogs. In 13 games last year, Mitchell led the team with 430 yards and six touchdowns on 29 receptions.

Behind Mitchell, depth is scarce. Senior JaVonta Payton, a talented speedster in the slot and on the outside, showed flashes both in junior college and last year but never found sustained success behind Deddrick Thomas or Stephen Guidry. Junior Austin Williams has had semblances of success, too, but he has a limited ceiling.

"The biggest thing about him is he's a guy that's been a lot of places and camps and he's worked on being a receiver that runs good routes," Copiah-Lincoln Community College coach Glenn Davis told The Dispatch of Heath last August. "(He's) worked on releases. He's a very polished guy. When he doesn't think too much, things come naturally to him."

Shavers had little chance to flash the talent that made him among the nation's elite receiver prospects in the class of 2017 during his tenure at Alabama. With two years to play in Starkville, he'll be called upon early and often should Leach's first season in charge get off the ground.

"I'm excited for him because I think the kid's a leader," Miller said. "I think he's gonna go on to the next level."