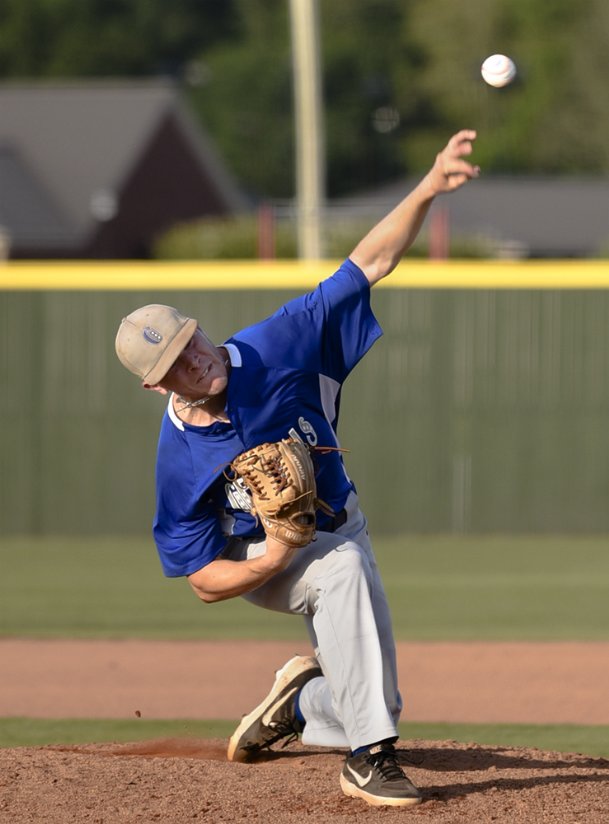 NEW ALBANY -- As Robby Broseus approached the plate, Hill Country Generals coach Jeffrey Cook walked up to him, ready to remind his hitter of an important detail.

"Either way," Cook told Broseus, "it's going to be the last at-bat of the game."

Broseus stood in the batter's box against DeSoto Xplorers pitcher Grant Johnson with two out, the bases loaded and the score tied 3-3 in the bottom of the sixth. With Friday night's Cotton States Baseball League contest past its 2-hour, 5-minute time limit for starting a new inning, Cook knew it was all or nothing.

"Hey, just sit back and get the hit," he told Broseus, who will be a junior at Lyon College in Batesville, Arkansas, this year.

Broseus did just that, lifting a ball into shallow right field. It found a hole between the Xplorers' second baseman and right fielder, and the Generals (6-5) found a last-minute burst of offense for a 4-3 win over the Xplorers (5-5-1) Friday night at BNA Park in New Albany.

The summer league team, which features 11 players from Golden Triangle area schools, trailed 3-1 headed into the bottom of the sixth Friday night. But with runners on second and third and two down, Robert Akines Jr. of Memphis -- a rising senior at LeMoyne-Owen College -- grounded a ball through the left side for the tying hit.

"I knew Robert was going to do it," said Cade Stacy, a Caledonia product who completed his freshman year at Meridian Community College this spring. "He's been hitting good all summer, so I had confidence in him."

Stacy pitched the final two innings in relief of Blue Mountain College ace Eli Jackson, picking up the victory as the Generals got over .500.

"It was great," said Heritage Academy graduate Seth Harris, who starts his college career at East Mississippi Community College this fall. "We've been struggling a little bit, so it was nice to get some momentum going for the rest of the weekend."

The Generals have one of the better pitching staffs in the 10-team summer league, ranking fifth in ERA and second in strikeouts. But their offense hadn't produced, with a .217 team average that slotted the team eighth in the Cotton States League.

Friday's game, though, offered proof things are starting to catch up for the Generals' bats.

"We've been struggling hitting, so maybe this will turn it around for us," Harris said.

His single against Johnson to lead off the sixth was one of five Generals hits in a fateful inning that often looked unlikely to end with a win.

After East Webster product Miller Hancock doubled to deep left to put two men in scoring position, Heritage Academy's Banks Hyde took two breaking pitches for strikes before swinging and missing at another offspeed offering. The Pearl River Community College incoming freshman made his way back to the dugout with his team one out away from a loss.

Then Akines -- whose clutch reputation Cook knows well from four years spent in the summer league -- delivered, tying the game with his two-run single to left.

"I knew Robert would get a hit," Harris said. "He always gets hits."

That brought up Broseus, and when the ball came off his bat, Harris was dead sure: The game was over, and it sure wasn't going to end in a tie because of the time limit.

"It wasn't deep enough to get to the outfield, so you knew it was going to get down," he said.

Cook said Broseus has been staying with his family in New Albany over the summer, and Broseus' heroics Friday apparently merited a reward.

"I told him I might take him out to eat tonight," Cook said.

The Generals and Xplorers traded runs in the second, when Jackson allowed an RBI single in the top half of the inning but made up for it by hitting his own in the bottom part of the frame.

In the fourth, the Xplorers' Chris Swanberg -- whose .448 batting average leads the CSBL -- drove in a run with a base hit. The starting first baseman for the University of Memphis this spring, Swanberg is one of the Xplorers' four NCAA Division I players -- two with the Tigers, one with Louisiana Tech and one with Alabama State.

"It's fun playing against them, too," Harris said. "Better competition just makes you better."

The Xplorers brought home another run on a groundout in the top of the sixth, but despite falling behind 3-1, the Generals stayed sharp on defense, refused to let the game get out of hand and mounted an "energetic" comeback that won them the game in dramatic fashion.

"We've struggled at the plate a lot early on, but we played good defense, and we got back in it late," Hancock said. "That was a good job by all of us."

Before the team's layoff for the Fourth of July holiday, Stacy said the team wouldn't have been capable of such a clutch performance. But he knows the Generals have improved, and they were ready Friday night when it counted -- a big step in the right direction.

"Two weeks ago, that definitely wouldn't have happened," Stacy said.

1. Ben's burning questions: What Mississippi State's new schedule forecasts, is a wave of transfers coming and how sportswriters would deal with no football this fall COLLEGE SPORTS