With free football camp in Starkville, Jeffery Simmons hopes to 'pass the crown' to next generation 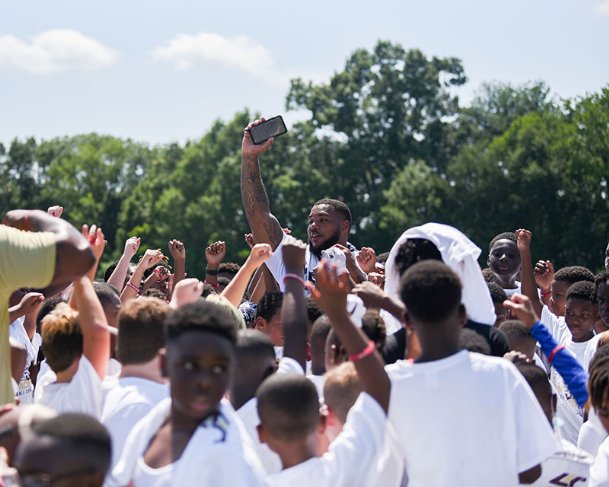 Former Mississippi State standout Jeffery Simmons huddles with the kids who attended his football camp on Friday in Starkville. At the end of the camp on Friday, one notable athlete from each grade was awarded a trophy and every participant received a medal. Kids also got to-go lunches after the camp. Photo by: Claire Hassler/Dispatch staff

STARKVILLE -- Before Jeffery Simmons was a first-round NFL draft pick, before he was a standout at Mississippi State, even before he was a phenom at Noxubee County High School, he was a water boy.

Tyrone Shorter remembers bestowing the position on Simmons when Shorter was the head football coach at Noxubee County and Simmons was entering the fifth grade, back when neither had any idea the kind of player Simmons would become.

On Saturday afternoon, almost 12 years after Simmons lugged water bottles for the Tigers, Shorter -- now the head coach at Louisville High School -- chatted with his former charge and a bevy of fellow NFL players from the area under the shade of a black canopy at the Starkville Sportsplex.

The first-round draft pick of the Tennessee Titans in 2019 had come back to the town where he played college football to host the first-ever Jeffery Simmons Football Camp, a free enterprise held for first through eighth graders Friday and high schoolers Saturday. Seeing Simmons give back to his old community by helping kids no different from him so many years ago, Shorter said Simmons' legacy has almost come full circle.

"To now see the man that he's become, it is huge," Shorter said.

The former Noxubee County coach said that Simmons' athletic ability, size, talent and unparalleled work ethic stood out right away. By the time Simmons was in ninth grade, Shorter was convinced he would be a future NFL star, and Simmons has fulfilled that promise.

He also came through on another thing he and Shorter once discussed: the civic responsibilities of being a professional football player. The camp, Shorter said, fit that perfectly.

Simmons said all it took for Shorter, who was one of nine local high school and college coaches who volunteered their time to coach players at the camp, to help out was a single text.

Titans wide receiver A.J. Brown, a Starkville High School product; former Mississippi State stars including Montez Sweat, Elgton Jenkins, Johnathan Abram and Tyre Phillips; and even Miami Dolphins defensive end Raekwon Davis, who is from Meridian but played college football at Alabama, made guest appearances. Even with training camp reporting dates looming, Simmons said all it took for his friends to help out was "one call; that's all."

"There wasn't any 'Oh, I've got to look at my schedule,'" Simmons said. "All these guys were like, 'I'll be there.' I'm just honored to have a great circle around me to support me."

Simmons said he wanted to use the football knowledge that he and the camp's 11 NFL guests have in order to give back to players who look up to them. He said holding the free camp can be a way to make up for the limited resources Simmons and many of the guests had as kids.

"Now, we use our platform to help these guys out," Simmons said. "It's big for a lot of these NFL guys to actually show these guys the way."

Players flocked to the two-day camp from around the state; Shorter said he knew of campers from as far away as Greenwood who attended because Simmons' high school and college accomplishments carried weight even there.

Ahmad Hodges, a rising junior wide receiver at Okolona High School, said he came to the camp Saturday hoping Brown could help give him the experience he learned to possibly play in the NFL someday.

"It's a great feeling being out here at Jeffery's camp seeing all these NFL players," Hodges said. "Having the chance to play with them and learn from them is a great experience."

Jenkins, a guard for the Green Bay Packers, said he instructed campers to follow the techniques of the drills they ran during the camp and to listen to their coaches and any other instruction they received.

"I was once in their shoes about five or six years ago," Jenkins said.

So was Simmons, who remembers going to camps with his uncle, Jason Hatcher, who had a 10-year career with the Dallas Cowboys and the Washington Redskins. Hatcher, who was Simmons' mentor when he was growing up, hosted a few camps, and Simmons wanted to do the same.

Sweat, a defensive end for the Redskins, said the players on the field Friday and Saturday reminded him of who he used to be when he played high school football in Kentucky.

"You can see some real talent out here and some guys that you can actually see yourself in and say, 'I was that guy,'" Sweat said.

He, Simmons and the rest of the camp's guests made sure to stress that the transition from prep prospect to NFL first-rounder took years' worth of effort to achieve.

"We want to show them that that stuff didn't happen overnight," Sweat said. "It takes hard work and dedication, and day by day you've got to get better and better."

Phillips, drafted in the third round by the Baltimore Ravens this spring, only played one year of high school football and said Saturday's campers are "already way ahead of me by far.

Regardless, the former Mississippi State standout offensive lineman still offered his advice to the assembled players.

"There's no limits to what you can do," Phillips told them. "Whatever you do, put your all into it and take every rep as, 'This could be my last rep.'"

The camp was originally slated to be held at Noxubee County, but Starkville Mayor Lynn Spruill helped out with the late switch. Phillips said the fact that Simmons chose to hold the camp in Mississippi rather than in Tennessee, where he's cultivated his own fanbase, was important.

"It means a lot to know that he really cares about Starkville and Mississippi," Phillips said.

Simmons made it clear he does, and he said he wants to keep it going: His first camp hopefully won't be his last.