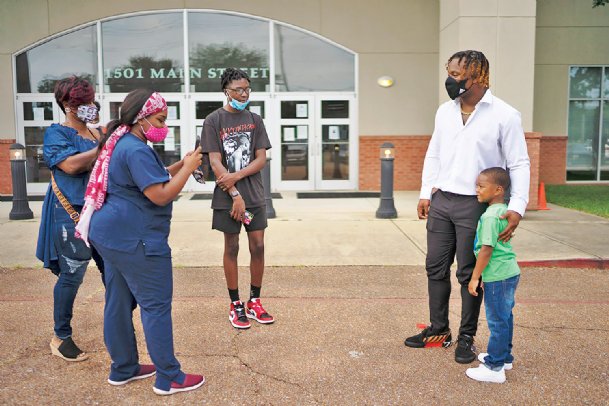 Mississippi State running back Kylin Hill poses for a photo with his cousin, Braylin Williams, 5, after receiving the key to the city from Columbus Mayor Robert Smith during Tuesday's city council meeting. Hill had said he would sit out the football season if Mississippi did not remove the Confederate emblem from its state flag, echoing criticism from other figures in sports and business industries throughout the state. On June 28, the state Legislature voted to retire the flag and implement a commission to design a new flag. Photo by: Antranik Tavitian/Dispatch Staff

Kylin Hill has long dreamed of a day like Tuesday.

Growing up in Columbus, Hill, now a standout running back for Mississippi State, would confidently tell his friends he'd receive the key to the city in the future.

In mid June, a debate regarding the status of Mississippi's state flag bearing a Confederate emblem was raging in the Mississippi state legislature. Exterior pressure to remove the flag was put on the state from various sources, such as the NCAA when it announced it would no longer allow Mississippi to host NCAA postseason events in an escalation of its previously developed Confederate flag policy.

On June 22, Hill finally had enough and took action. He went to social media, and tweeted: "Either change the flag or I won't be representing this State anymore & I meant that .. I'm tired."

Hill was met with immediate feedback. Some positive. Others, not so much.

"I just thought, we have all these big time athletes, who have a voice, but won't speak on it," Hill said. "So I said, 'Why not me?' That's the thing, you can't be scared to speak up."

A handful of Mississippi State fans vowed the Bulldogs didn't need Hill's contributions and would prefer a player that didn't speak out regarding politics. That criticism was skeptical at best, considering Hill led the Southeastern Conference with 1,350 rushing yards and was a first-team All-SEC selection. Other fans tweeted support, lauding his activism.

Hill's mother, Karenda Hill, knew that as well, as the star MSU running back said he received a text from her shortly after his tweet.

"My family was my number one support system," Hill said.

After more than 100 years of flying the state flag bearing the Confederate emblem, the Mississippi state legislature voted in late June to remove it. A new state flag will be voted on in November. One state legislator even made a motion to request the bill to be named after Hill. The motion was eventually tabled.

Tuesday, Hill's childhood visions proved accurate, as the 5-foot-11 star running back was presented his long coveted "key to the city" of Columbus on Tuesday by Mayor Robert Smith and the Columbus City Council in recognition of "a heroic stand in the face of adversity."

Throughout his life, most of the accolades Hill has racked up have been merited from his contributions on the gridiron. Tuesday's awards might exceed all of them, Columbus District Attorney Scott Colom said.

"I remember when you scored five touchdowns in a high school football playoff game. It was an unbelievable game," Colom said in the presentation of the ceremonial award. "But this, this will probably be the most important thing you do. No matter how great of a football career you have, no matter how many Super Bowl rings you win, this is it. No longer will kids have to be explained to why that flag is there and what it represents. You were a big part of that."

After the presentation, Hill said MSU Athletic Director John Cohen and the Mississippi State coaching staff have told him they were proud of him for taking a stand.

"Kylin was certainly a spark that started something that many people in this state fought for," Cohen said. "I think Kylin would be the first to tell you it's a team effort. Kylin is not defined by one tweet, but he's somebody who's not just a special member of the Mississippi State family, but is somebody who showed courage and there's no question we're awfully proud of him."

Kylin's mother, Karenda Hill, also made a brief comment at the meeting.

"I just want everybody to know that I'm very super proud of my son," Karenda Hill said. "I want to thank Mississippi State and all of his true fans. To the city of Columbus and all the players that supported him, I really appreciate that."

On Tuesday, Hill let himself bask in the recognition of an award he's dreamed of ever since he could remember.

"Getting the key to the city is unreal," Hill said. "Everybody who knows me knows I claim Columbus to the fullest. The good, the bad, Columbus is what I am, I was born and raised here. When I retire from football, I'm still going to be from Columbus."