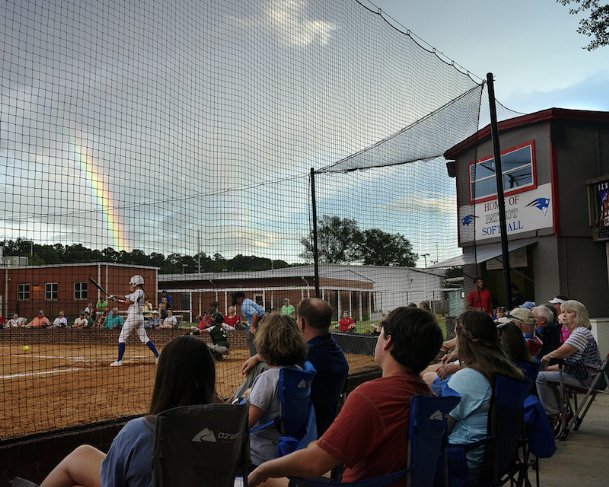 Heritage Academyâs Hannah Oswalt hits a single during the second inning of Fridayâs season opener against Kemper Academy in Columbus. The Patriots lost the game 23-11 after falling behind by as many as nine runs. Photo by: Antranik Tavitian/Dispatch Staff

On a night where thunderstorms threatened throughout coupled with an 11-run, 32-minute first inning, the Heritage Academy softball team's 23-11 loss to Kemper Academy on Friday night offered a look at some of the difficulties local schools will face in their attempts to play sports this fall.

Prior to the contest, athletic director Sean Harrison emailed parents with a string of measures the school had put in place to protect against the spread of COVID-19. Among them, Harrison asked that all fans be socially distanced while at events on campus and warned that masks would be required if that was not possible. Fans were also encouraged to sit in family units while viewing the game, and those working concessions were told they'd be required to wear masks.

Friday, social distancing was minimal as fans looked on from lawn chairs placed shoulder to shoulder, although several signs encouraging social distancing were displayed at the ballpark. Few masks were within sight, let alone worn -- including by those manning the concessions booth behind home plate.

"It was just so much fun being out here," Heritage Academy head coach Heidi Matthews said. "Just being able to play, be on the field -- if this hasn't taught us anything, it's to never take a moment for granted. And that's what we tell the girls every day: Any moment it could be taken away again."

As can be expected in any early-season contest, the Patriots' season-opening defeat was marred by the usual growing pains of a late July night. Bloopers found holes. A few more grounders than Matthews would've liked sputtered into the outfield.

But as Kemper Academy's lead ballooned to as many as nine runs -- one short of a run-rule victory -- the Patriots responded. Senior Carley Martin roped a two-run inside the park home run down the first-base line, tucking the ball into the right-field corner.

Eighth-grader Jeoreia Henry added to the late-inning fireworks as Heritage Academy desperately clawed back with a mammoth home run over the fence in left center field.

Sending her teammates into a frenzy as they greeted her at home plate, Henry's homer was the final tally in the Patriots' total being recorded on the red and white scoreboard in center field.

"I just saw the ball in my zone; I took it where it was pitched; I hit it in a good spot, and it just carried on," Henry said.

On the mound, senior starter McKenzie Rhett pitched all seven innings, settling down from an eight-run first inning and shouldering the pitching load throughout the rest of the night.

"That was huge from her," Matthews said. "We really didn't expect her to go more than three or four innings, honestly. But that right there showed that she had the fight. She wasn't going to roll over. She was going to fight for her team."

With Heritage Academy's next contest scheduled for Monday at Oak Hill Academy, it remains to be seen whether any further measures will be put in place or enforced in regard to the COVID-19 pandemic.

Beginning Monday, it's expected social distancing and mask wearing will be cracked down on by local law enforcement as Gov. Tate Reeves added Lowndes County to the list of counties that will limit outdoor gatherings to a maximum of 20 participants while also requiring masks and six feet of social distancing at sports complexes.