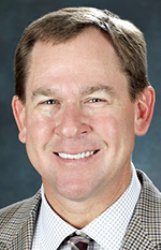 Gathered in Nashville for the SEC's men's basketball tournament in early March, it was then that Cohen, Sankey and their fellow SEC leadership watched the hotel empty and the sports world come to a staunch pause in the wake of the COVID-19 pandemic.

"He knew, we all knew, that some of these seniors were never going to get their basketball postseason back again," Cohen said. "It's kind of an abrupt end to a career in which, again, these kids, these parents, our coaching staffs have so much invested. It was a real shame."

Now months on from his brief spell in Music City, Cohen continues to oversee the safe return to play for MSU's fall sports, and more specifically, football.

Plans to return to the gridiron have begun to come into focus in recent days. Last week, the SEC announced it would go to a 10-game, conference only schedule that is set to begin on Sept. 26. The conference also disclosed on Tuesday that it would allow practices to begin on Aug. 17.

Speaking on the subject during Tuesday night's final installment of the Virtual Road Dawgs Tour, Cohen preached patience for those looking for answers regarding stadium capacity, tailgating and other football-related endeavors.

"I know our fans need some time to make plans, I totally get it," he said. "But as we walk through this process together, certainly we want as much time as we can to make the best decision we can."

In other related talk, Cohen sang the praises of numerous staffers, including those of Senior Associate Athletic Director/Sports Medicine and Performance Mary McClendon -- who is overseeing MSU's student-athletes' returns to campus for voluntary practices.

Working alongside Cohen, coaches and other athletic administrators, McClendon has taken point on most issues regarding the safe and healthy return of student athletes to campus in addition to the varying protocols the school has put in place for athletes regarding when they're tested, quarantining and how to safely return to practice should they endure a positive test.

"Mary McLendon, when all this is over, if it ever indeed is over, deserves a medal because she has just done an incredible job along with all of our medical staff, making sure that we do this to the best we can."

Beyond COVID-19-centric concerns regarding football season, Cohen also updated onlookers on the outlook of MSU's primary construction projects in the development of an indoor tennis facility and Humphrey Coliseum. At present, it's expected the Mississippi State Indoor Tennis Pavilion -- which broke ground in the summer of 2019 -- appears to be on track for completion in the near future.

As for Humphrey Coliseum, Cohen said he expects there could be some delay in its renovation. Earlier this summer, he told the Dispatch construction on MSU's home basketball gym would likely depend on whether football would be played this fall.

In parting, Cohen left those watching with a message of promise, but encouraged those who hope to see sports this fall and return to a semblance of normalcy to continue wearing masks and abide by social distancing measures.

"Please encourage anyone you're around to be wearing a mask, especially indoors, and everything from washing your hands to being totally responsible" he said. "This thing's for real and our kids want to compete."