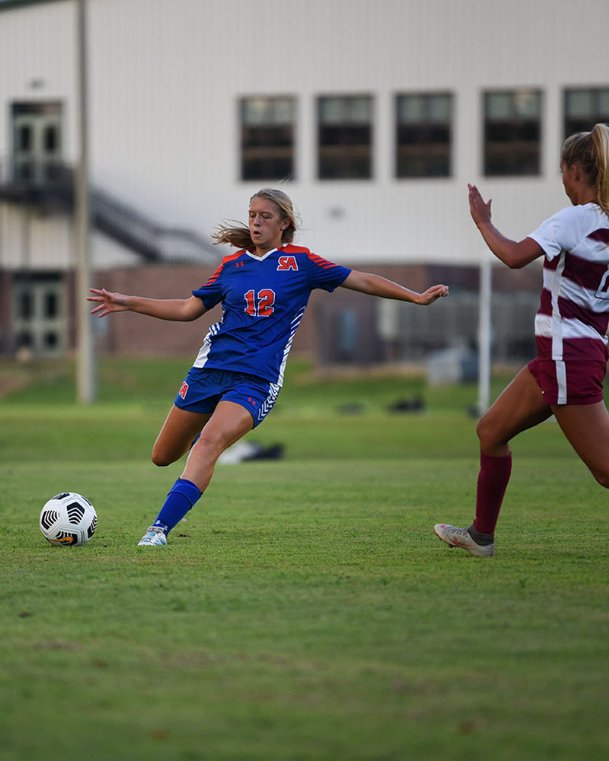 STARKVILLE -- Back when Starkville Academy soccer coach John Morgan was in Scotland for a UEFA coaching course, he saw something he'd never seen before: players so good they could line up balls from the air and knock them down in stride.

And on Tuesday, when Morgan saw a player from opposing Hartfield Academy catch the ball on her foot and deaden it on the Starkville Sportsplex grass, it was a reminder of just how good the Volunteers' opponent was.

Hartfield, which Morgan called the No. 1 team in the state of Mississippi in any division of the Midsouth Association of Independent Schools, showed that might in an 8-0, mercy-rule win over the host Vols on Tuesday.

Starkville Academy fell to 0-2 after a 6-0 loss at Presbyterian Christian on Monday in Hattiesburg, but Morgan said he was much happier with the Vols' performance Tuesday against the powerhouse Hawks.

"We looked 10 times better today, believe it or not, than we did against PCS," Morgan said.

Senior captain Kaitlyn Bock said Morgan aims to front-load the team's schedule with some of the best teams around in order to prepare them well for the district slate to come. Tuesday -- roughly 28 hours after a hot afternoon game in Hattiesburg -- was one of those tests.

"If you're not getting tested, you're not going to get any better," Morgan pointed out. "We could play an easy schedule and come out 11-0 getting into district, but have we really learned anything from that?"

The main thing Starkville Academy learned Tuesday, Morgan said, was that their offensive attack still needs to be refined. The Vols rarely crossed into Hartfield territory, and when they did, a giveaway soon followed.

With multiple players out -- including Kaitlyn's sister Lauren, who missed the game after wisdom teeth surgery -- most of that can be chalked up to inexperience, Morgan said. He said his younger players are still adjusting to game speed and are learning they often have more time than they think to make something happen.

"I'd love to see us build up a little bit more, but that's something that we're all trying to work towards," Morgan said.

He praised the performance of eighth-grade goalkeeper Chandler Nettles, who played just once before taking over the starting role this season from Meri Laci Archer. Archer, headed to Meridian Community College to play soccer, greeted her teammates on the field postgame; Nettles is still taking a "crash course" at the position.

"When you're replacing a goalkeeper that had as much experience as Meri Laci, you're going to have that," Morgan said.

But Nettles did well despite allowing eight goals, most of which Morgan said no keeper could get to. The eighth grader saved 11 shots in what she said was a "nerve-racking" performance against an offensive juggernaut.

"She saved so many more today than yesterday's game," Kaitlyn Bock said. "I think she's improved just over the games."

And now Nettles has learned how to defend against one of the best teams in Mississippi, which could come in handy given her subsequent bold prediction of reaching the state championships this fall.

"I know how hard their shots are, the pace of their shots now," Nettles said. "Next time we play them, we'll be ready."

Morgan acknowledged that an 8-0 loss is never pretty, but he echoed the sentiment: The preparation the Vols got from Tuesday's game will be worth it down the line.

"I think at the end of the day, the goal is to make the playoffs," he said. "They're not a district game. Heritage (Academy), Lamar, Magnolia Heights: Those are the games that are really going to be the key games for us, and everything else is trying to build confidence and improving ourselves up to that point."