Oak Hill Academy football still has 'a long way to go,' but Raiders feel upbeat ahead of season 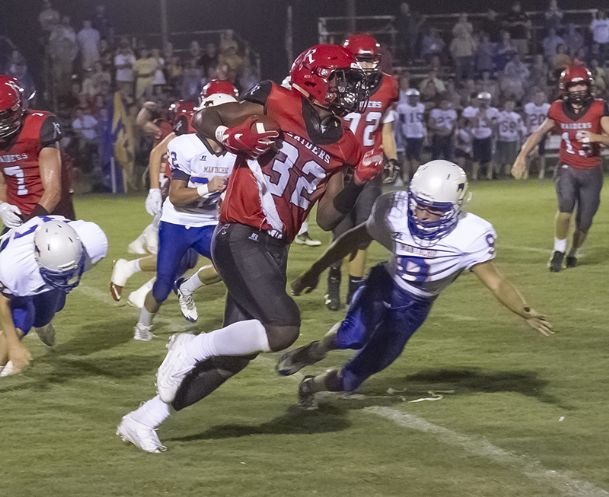 Oak Hill Academy's Branden Stevenson runs after the catch in a home game against Mantachie on Aug. 23, 2019, in West Point. Stevenson graduated this spring and leaves one of several holes the Raiders will be tasked with filling this fall. Photo by: David Miller/Dispatch file photo

Last season, in a Sept. 13 home game against Tunica Academy, the Oak Hill Academy quarterback led his team down to the goal line twice in key moments.

But both times, the Raiders failed to score. Tunica won the contest, 48-42, in double overtime.

Slow starts and a general lack of energy doomed the Raiders to a 2-9 campaign last fall, though new head coach Bill Rosenthal said he's already seen that starting to turn around.

"I'm pleasantly surprised with where we're at," Rosenthal said Tuesday. "We've still got a long way to go."

The Raiders lost more than half their 2019 roster to graduation, so Rosenthal cautioned that a turnaround may not be easy or quick.

But this year's players have already shown their willingness to make up for it. Oak Hill's varsity roster will still include 22 or 23 players, Rosenthal said, and attendance has been much stronger at summer workouts than it was last year. The Raiders bring 17 or 18 players a day through their weight room.

Though Monday's practice -- the first in full pads -- was a bit slow, Rosenthal said he's been happy with his team's effort and chalked up the sluggishness to a new practice time (after lunch rather than in the morning, making it hotter on the Raiders' practice field) and a long layoff because of the coronavirus pandemic.

"It's been a strain not being here for nine weeks, missing the last nine weeks of school," Rosenthal acknowledged.

Oak Hill's returning players and its newcomers, however, are trying to make up for lost time with just over two weeks to go before the team's season opener at Benton Academy. The contest replaces a road game at Mantachie that was canceled when the Mississippi High School Activities Association pushed back the start date of fall sports by two weeks. Oak Hill also lost its scheduled Aug. 28 road game with MHSAA Class 1A program Tupelo Christian Prep.

No matter who's on their schedule, though, the Raiders are happy for a return to sports that edges ever closer each day.

"I'm just ready to go," senior wide receiver Manning Huffman said. "We're all just fired up and ready to get after it."

Huffman will again play a big role in the Raiders' spread offense, catching passes from Dill once again. The two have developed a solid rapport in the scheme, which involves getting the ball out early and taking advantage of the team's speed to run after the catch.

The pieces around Dill and Huffman are set up to maximize the Raiders' style of play, as West Point High School transfer Drew Wright and returnee Jake Glusenkamp will split running back duties, according to Dill.

Oak Hill doesn't have much depth on its offensive and defensive lines -- only one starter returns -- but the Raiders' plan not to hold the ball in the pocket long should neutralize a possible weakness.

That goes back to Rosenthal's philosophy for the team: Do what his players do best.

"We're not real big," he said. "We've got a little speed. We're going to focus on what our strengths are and try to get good at it."

Dill said Rosenthal, who replaced Chris Craven as head coach this offseason, has already made a good impression.

"I think it's going to be a big difference," Dill said. "He relies on us, we rely on him, and we have a good relationship."

With their new coach in the fold and a full schedule awaiting, the Raiders said they're happy they'll be able to get back on the field soon.

"It's just exciting," Dill said. "We've just got to stay ready for the season, and we're glad we're actually getting to play."