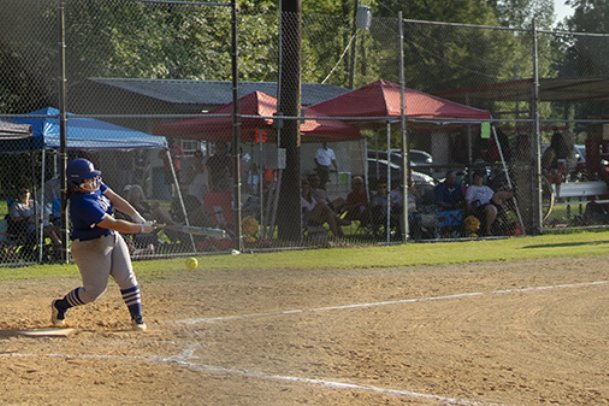 WEST POINT -- The Starkville Academy softball team had lost its confidence and its shrinking lead seemed soon to follow when coach Lee Berryhill did the only thing he could do.

A 10-0 lead had become 13-8, then 15-13, with two out in the bottom of the fourth inning of Monday's game at Oak Hill Academy in West Point as the Raiders rallied quickly.

"It was kind of back to, 'Here we go again,'" Berryhill said.

So he gathered his infielders and pitcher Calliope Koiva, letting them take a breather and calm down. When play resumed, Koiva got Oak Hill's Morgan Dabbs to smack a ground ball to shortstop for the final out of the inning.

"We responded every time they did," Berryhill said.

The Volunteers (2-2) pounded 24 hits and made just two errors in the thumping compared to Oak Hill's seven miscues.

"They capitalized on our mistakes and scored runs, and we didn't do what we were supposed to," Raiders coach Mitch Bohon said. "They got us."

Starkville Academy started hot early with a 10-spot in the first inning, taking advantage of five Oak Hill errors in the frame alone.

But the Raiders got back in the game with three runs in the bottom of the second and five in the bottom of the third. After Starkville Academy scored twice in the top of the fourth to make it 15-10 in the Vols' favor, Oak Hill left fielder Dovie Suggs drove a two-run single down the third-base line, right fielder Kara Reed reached on an error that brought home a run, and pitcher Carley Wooten found a hole in shallow right for a two-run single.

The Raiders were within two, but as they did Monday in a 26-16 loss to Heritage Academy and Tuesday in a 20-1 defeat at the hands of Winona Christian, things got away from them.

A three-run double by Arden Parker was the Vols' big blow in a six-run fifth, and Browning Hughes hit a three-run homer to right center field in the sixth while Koiva drove in four runs in the frame on an error and a double. Just like that, Oak Hill was down by more than 20 runs.

"We're playing solid for an inning or two, then the floodgates open and we don't stop it," Bohon said. "The game's right there, then you look up, and it's 34-13."

Berryhill praised his team's willingness to both attack pitches in the strike zone and lay off balls Thursday, saying it helped Starkville Academy close out Oak Hill emphatically.

"We knew going into the top of the sixth right there we had a chance to put the game away if we would just be disciplined at the plate ... and we did a good job of it," Berryhill said. "We took the walks that were available, and we hit it when we had to hit it."

While he knows it's a natural product of inexperience and youth, Bohon acknowledged that Thursday's game was frustrating for a team that showed several flashes early on and hopes the Raiders can "catch a couple people slipping" later on.

"I think we're making some strides in the right direction," he said. "It's just that they've just got to put it together for a complete game, not just four innings."

Oak Hill senior Baylee Smith, who manned center field as the Volunteers put up their barrage of runs Thursday, shared her coach's ambivalence -- and not without optimism.

"Part of it is frustrating, and part of it is, 'We can get there. We can make it,'" Smith said.