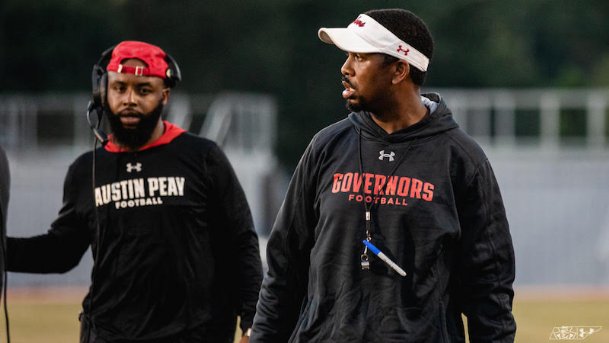 Marquase Lovings, right, is one of seven coaches on the Austin Peay staff who previously spent time at Mississippi State. Now the interim head coach following Mark Hudspethâs departure, Lovings is entering his first season at the helm of his own program. Photo by: Courtesy of APSU Athletics

STARKVILLE -- Marquase Lovings concedes his first week as the head coach at Austin Peay was a whirlwind.

Speaking with The Dispatch via Zoom earlier this month, Lovings had officially been on the job for less than seven days after former MSU assistant Mark Hudspeth resigned his post due to what he cited as personal reasons. A one-time Sylvester Croom assistant in Starkville, Lovings is entering his 14th year as a Division I coach and first as a head coach, albeit on an interim basis.

And while it's the first time he's ever helmed a program himself, the collection of former Bulldogs who comprise his inaugural staff have eased the transition.

"We have a very positive culture here at Austin Peay," Lovings told The Dispatch. "... It's not just us; it's a cultural thing that we have going on at Austin Peay right now. Coach (Hudspeth) started it, and I'm not here to finish it; I'm here to keep it going."

Spanning three coaching staffs and 14 seasons in Starkville, the Austin Peay staff's experiences at MSU are as varied as they are the same.

Lovings got his start as a quality control staffer under Croom in 2007 and later worked for Dan Mullen between 2009 and 2010 following his playing career at Howard University in Washington, D.C. Linebackers coach Mark Powell and offensive coordinator/quarterbacks coach Tim Zetts arose from the Joe Moorhead/Bob Shoop coaching tree as both boast east coast experience and have relationships with the former Bulldog head coach and defensive coordinator dating back to their days north of the Mason-Dixon line.

Former MSU standout and Governors wide receivers coach Chad Bumphis -- who concluded his career in the maroon and white between 2010 and 2013 with 2,270 yards receiving and 24 touchdowns -- played for Mullen in the midst of MSU's modern renaissance into a nationally relevant program before a three-year spell split between the NFL and Canadian Football League.

Special teams coordinator Jordan Frazier never actually suited up for the Bulldogs but worked as a student assistant following a spell as a media relations intern during his time as an undergrad in Starkville between 2010 and 2014.

Frazier is a third-generation Bulldog, as his father worked as an equipment manager for the MSU football team in the mid-1980s, while his own childhood was spent watching VHS tapes of former Bulldog quarterback Sleepy Robinson running the speed option during the 1992 season.

"It's kind of a family tradition," Frazier told The Dispatch. "Being able to work with guys like coach Bumphis and all these guys that have a rich Mississippi State tradition and history -- it's really special for me."

"I hear it every day," Bumphis chimed in, smiling through Frazier's enthusiastic sermon. "The excitement never leaves. That's real passion. You know what I mean? That's what you get. You love it; you have to love it."

Taking over a program that had been stabilized by current Charlotte coach Will Healy but sat only three years removed from a second straight 0-11 season, Hudspeth's staff took on the challenge of maintaining the winning culture their predecessors had briefly tapped into.

Entering their first year under the new regime, the Governors' 2019 squad operated as a functional melting pot of ideologies from three different coaching staffs previously based in Starkville. Lovings, Frazier and Bumphis brought the energy, enthusiasm and purpose Mullen demanded from his coaches and players in practice daily. Zetts and Powell brought a similar intensity the Moorhead/Shoop combination bred. In all, it amounted to an 11-4 record and the school's first Ohio Valley Conference championship since 1977.

"I'm just sitting here thinking about (this) call, I think that people understand the sense of urgency having been in the SEC," Lovings said. "Experience is so underrated. ... From a work capacity standpoint, just understanding you're about to go play LSU and while we're going to play UT Martin, we have to have the same sense of urgency about ourselves and how we want to attack it and how we want to win. Whether you're in the SEC West or the OVC, I think it translates in terms of the urgency that everybody wants to win and you got to win now and win, win, win, win win."

While Hudspeth has since resigned under murky circumstances -- including serving a 20-day suspension for "unacceptable conduct" according to a report by the Clarksville Leaf-Chronicle -- the bare bones of what the one-time MSU assistant built at Austin Peay remain.

Zetts, Bumphis and Powell all return in their varying capacities. Frazier, who served as the director of football operations in 2019, moves into the special teams coordinator role. Former MSU staffer Camie Cole Nations -- who worked as the Bulldogs' academic athletic tutor and recruiting graduate assistant during her time in Starkville -- will serve as the team's director of football operations in addition to her previous role as on-campus recruiting coordinator.

Former MSU punter Kody Schexnayder also joins the staff as a special teams graduate assistant after he spent two months interning with the Bulldogs' recruiting department this past spring. Now on the same staff as a handful of his former coaches just months removed from the end of his own playing career, Schexnayder said he's passed the time during quarantine playing golf with Powell, Frazier and Lovings almost every Saturday when not working late into the night in the team offices.

"When you walk into those into the building with those guys it's like 'Alright, here we go. It's time to go to work,'" Schexnayder told The Dispatch.

"It's just so familiar having people who've been there, who know what it's like coming up in that state, trying to make it out, playing ball there, what it means to that state to be a part of that university," Bumphis added.

Lovings -- who was among the first people in Starkville alerted that Croom would not be retained as head coach while visiting Brandon McRae after he'd been hospitalized with a broken leg during the 2008 Egg Bowl -- knows this season is one in which he can coach his way into the removal of his interim tag by year's end.

And though there's undoubtedly pressure that comes with being handed an 11-win team coupled with the ongoing uncertainty as to whether FCS football is even played this year, Lovings is emboldened by the coaches who do remain on his staff and the trust he has within each to maintain the winning culture started under Healy, accentuated by Hudspeth and now entrusted to him.

"I think coach (Hudspeth) set a standard around here, and that's what the city of Clarksville is expecting us to do over and over again," he said. "People say that might be a weight on your shoulders, but I think the guys on this Zoom call expect the same thing."