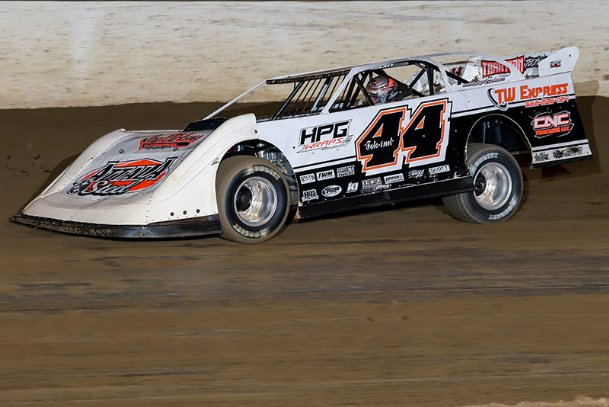 Before the feature races during Fan Appreciation Night on Saturday at Magnolia Motor Speedway, children raced bicycles on the straightaway in front of the bleachers to win prizes.

Then Brett White took his No. 44 car onto the dirt track for the Crate Racin' USA Late Model Sportsman race and once again made his competitors look like so many kids on bikes.

White led wire to wire to claim yet another Sportsman win at the Mag on Saturday, beating second-place Colby Ponds of Caledonia by more than two full seconds.

Tony Shelton of Steens and TJ Davis of Caledonia were third and fourth, and Cody Chism was fifth.

Shay Knight and Mark Stokes, both of Steens, were seventh and eighth.

Dale Johnson of Wade led a six-car field to win the Hot Shot Special on Saturday.

Johnson beat out Judd Murphy and Ed Caulder of Columbus, who finished second and third, respectively.

Aidan Fletcher of Columbus and Scooter Ware of West Point were second and third, while Terry Taylor of Steens and Justin Comer rounded out the top five.

Craig Barham and John A. Beard Jr., both of Columbus, were sixth and seventh. Scott Gable and JR Card, both of West Point, were eighth and ninth.

Daniel Wiggins of Starkville was 13th, and Columbus drivers Bobby Barksdale and Kevin McWilliams were 14th and 15th.