Football has been EMCC's 'livelihood,' but Lions must adjust to a new way of life for now 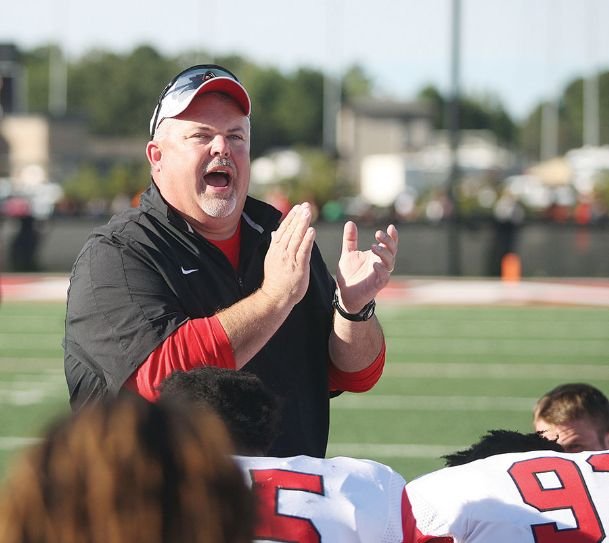 East Mississippi Community College coach Buddy Stephens and the Lions will have to adjust to a ânew way of lifeâ for now. âItâs probably one of the most heartbreaking decisions that Iâve ever had to make, but at the same time, itâs one of the easiest decisions based on the information we have right now, based on the circumstances and conditions that we have,â Stephens said. Photo by: Dispatch file photo

The scent of popcorn permeates the air. Students and fans converge on Sullivan-Windham Field to congregate, talk and -- almost always -- take in a Lions victory.

It's something Thompson looks forward to every year, an omnipresent sign of fall. It's also a staple of the school's culture, a hallmark of the EMCC experience.

"This has been our livelihood," Thompson said.

This year's edition of that livelihood was set to start Aug. 27 -- just two weeks from today -- with a road game at East Central Community College.

But now, it won't happen at all.

Tuesday, EMCC elected not to play in the Mississippi Association of Community Colleges' fall season, which was scheduled to start Oct. 1, because of the safety challenges presented by the COVID-19 coronavirus pandemic.

"Now, basically, we're having to get accustomed to a different way of living," Thompson said.

Here's why the Lions won't be taking the field this fall, what the fallout of their decision will be and what the path is to a safe return.

As he weighed whether or not to attempt to play this fall, EMCC head coach Buddy Stephens contacted several Southeastern Conference, Big 12 and NCAA Division II coaches to see how they felt and how their teams were faring.

The feedback he got wasn't promising.

One coach said there were 20 people within the program who had tested positive for COVID-19. Three of them had myocarditis, an inflammation of the heart muscle that is now a known side effect of the virus. One player's heart was functioning at just 20 percent of its normal capacity.

The coach has an aunt with COVID-19, and he said she doesn't have long to live. One of his players lost an aunt and a grandmother to the disease. As tough as his players are, Stephens said, worrying if they will get sick or infect someone they love is now always in the back of their minds.

As time passed, Thompson, the football team and EMCC monitored COVID-19 case numbers in the area. They saw a spike in new cases. Then they saw a spike in deaths. On Tuesday, they made their decision official: It just wasn't safe.

That means Stephens' first fall without football in 44 years -- he counted the other day -- and while the decision was painful, it wasn't hard.

"It's probably one of the most heartbreaking decisions that I've ever had to make, but at the same time, it's one of the easiest decisions based on the information we have right now, based on the circumstances and conditions that we have," Stephens said. "There's just too many unknowns to put in front of our young people right now, and we're not going to do anything that puts our people in harm's way."

He broke the news in a team-wide Zoom meeting at 3 p.m. Tuesday, telling his players shortly before the information became public. While many of the athletes expected it, it wasn't easy.

But mostly, there was understanding. When several parents of players called Stephens to thank him for keeping their children safe, the coach was sure he'd made the right choice.

What's on the line

While the Big Ten and Pac-12 conferences also announced Tuesday they wouldn't be playing sports this fall, the SEC, Big 12 and ACC plan to forge ahead for now.

One of the main motivators for the leagues still hoping to play a fall season is, of course, financial. Nebraska coach Scott Frost, whose Big Ten schedule was canceled Tuesday, said not having a season could mean a loss of $80 million to $120 million for the Huskers' athletic department.

But although football is a major source of spending for EMCC, the loss of a fall season won't have much of an effect on revenue, according to Thompson and Stephens.

The athletic director said she doesn't pay much heed to the financial concerns of four-year colleges, who operate on almost a different plane of reality when it comes to bringing in money from football. While several Division I schools have eliminated some of their non-revenue athletics programs due to budget cuts, that hasn't even been mentioned at EMCC, Thompson said.

"On the junior college level, it's not like you make a lot of money off athletics anyway," she said.

Ticket sales at football games generate the majority of the Lions' revenue, but many of the fans are students flashing their IDs for free admission, Thompson pointed out.

Stephens said EMCC could actually end up worse off financially if a season were played should the disease flare up within his program.

Stephens said most FBS football programs have budgets big enough to prevent an outbreak by testing regularly and essentially putting their players and staff in a bubble. If anyone does get sick, those schools typically have medical staff in their facility to treat the infections.

"They have a lot more money than we do," Stephens said. "There's a lot of money on the line for those institutions."

'Is it safe?' Lions say not yet

In acknowledging that a season isn't safe this fall, EMCC will look to play in the spring, but Stephens knows there are a lot of questions that need to be answered first.

The coach said he thinks the many unknowns that come with spring football can be addressed.

"It would be an obstacle, but it's not one we can't overcome," Stephens said.

But it won't work for everyone. Stephens said he told EMCC cornerback Khyree Jackson, the No. 4-rated junior college prospect in the country, that trying to play two football seasons in 2021 alone isn't advisable.

"My advice to him is, 'You don't need to play. You don't have to play,'" Stephens said of Jackson, who holds 21 Division I offers. "I wouldn't put him in that position."

Stephens expects several Lions to graduate in December and leave for Division I as usual, but he's glad junior college players who stay won't lose a season of eligibility: A sophomore this fall will still be eligible to suit up for the Lions next year.

This year's players will also keep their scholarships, remain on campus for classes and have access to team and school facilities, including weight rooms, computer labs and libraries.

Without a season, "hopefully nobody will put ball over books," Thompson said.

Neither she nor Stephens has any idea whether more MACC programs will follow the Lions' lead in the coming weeks, they said.

"They have to ask themselves the same questions we had to ask ourselves," Stephens said.

He said the No. 1 question right now is, "Is it safe?" Until the Lions' answer is yes, Sullivan-Windham Field will stay empty, and campus will stay quiet.

"Let's do the right thing, let's do the smart thing, and let's make sure that when the Lions get back on the field, we're going to know without a doubt that it's safe and we can move forward," Stephens said.