To repeat last year's success, Columbus Christian Academy football must depend on everyone it's got 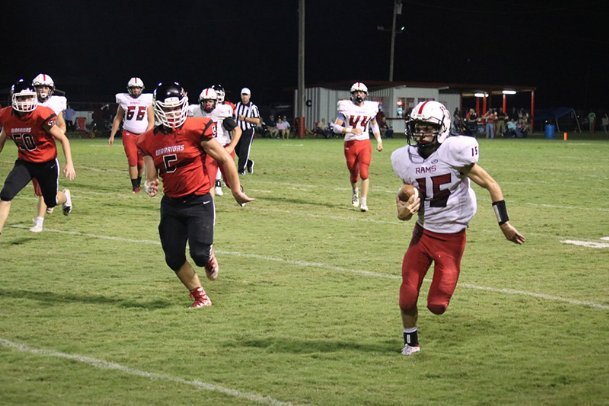 Quarterback Dakota Shaw, right, is one of five Columbus Christian Academy players who graduated after the Rams made the MAIS Class 2A semifinals last season. Photo by: Courtesy of Amy Shaw

"It's going to take every one of us," Williams routinely tells his team.

With just 16 players, the Rams bought into that last fall, reaching the MAIS Class 2A semifinals in their first year playing eight-man football. But with five critical seniors gone -- Dakota Shaw, Lawson Studdard, Will Teague, Tanner Dolan and Bryar Kemp all graduated -- the Rams will have to replace a formidable crop.

That's why Williams, in his second year with the team, is preparing every player on Columbus Christian's squad for a season that starts in just one week with a road game at Humphreys Academy in Belzoni.

Practices started Aug. 3 for the Rams, and Williams said he's been aiming to keep his players' thoughts off the COVID-19 coronavirus pandemic while they're on the field.

"You can't worry about all this and that and what may happen in the future," he said. "Right now, it's 105 degrees out there, and we're out there trying to work."

He said he's trying to get his players in shape and keep them physical and aggressive for a fast-paced style of football where big plays are prevalent.

"Eight-man football, it takes everything you've got," Williams said.

He said he hopes the Rams have got plenty. Senior Logan Bandre will anchor both the offensive and defensive lines, while classmate Tyler Looney plays all over the field.

Positional versatility is particularly important in the eight-man game, according to Williams; it's why having both Looney and sophomore Beau Kemp able to rotate pretty much anywhere will be critical. The younger Kemp has had a good start to fall practice, Williams said, and the coach thinks he can keep getting better.

"We called on Beau to do a lot as a ninth grader, and we're really looking for him to continue," Williams said.

Junior Lahndon Townley, a tackle machine on defense, will also play both sides of the ball for the Rams. Drake Shaw, now a sophomore, will take over his brother Dakota's position at quarterback.

"I've been really proud of how hard he's working, proud of his attitude toward learning and working on his basics," Williams said of Shaw.

The coach said Columbus Christian was fortunate in terms of injuries last year, as just one or two can be enough to tax a small roster to its breaking point.

"Staying healthy is a big part of it, as is being ready to play," Williams said. "We're young, but we're working hard."

With just one week to go before its season opener, Columbus Christian has to continue that hard work the sole way it currently can.

"We're going to take it one day at a time," Williams said. "That's the only thing you can do."

And when they take the field, they'll keep their coach's words in mind.

"It's going to take all of us," Williams repeated.