How Mississippi State quarterbacks K.J. Costello and Will Rogers earned their spots in their short time on campus 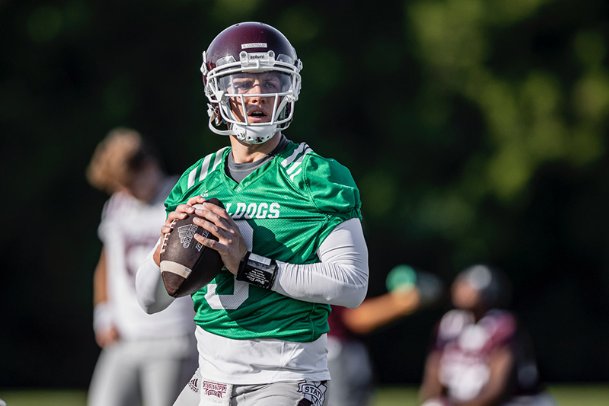 STARKVILLE -- Mississippi State freshman quarterback Will Rogers has only been on campus since December. Stanford graduate transfer K.J. Costello arrived in Starkville even later, on June 1.

Yet now less than two weeks shy of MSU's season opener against defending national champion and No. 6-ranked LSU in Baton Rouge, it's the Bulldogs' newest faces under center that sit perched atop the depth chart as they head toward a trip to Death Valley.

Speaking with the media for the first time since arriving from Paolo Alto on Tuesday, Costello is thought provoking in his verbiage. He spent nearly four minutes giving a thorough breakdown of Leach's air raid offense that left onlookers mesmerized.

The newest graduate transfer quarterback to team with first-year head coach Mike Leach, Costello has long had a distanced relationship with the latest leading man at MSU. The pair met annually as members of the Pac-12 North Division at Stanford and Washington State, respectively. At least four of Costello's high school teammates from Santa Margarita played for Leach in Pullman -- including receiver Kyle Sweet, who only moved to the outside from quarterback after Costello developed enough to necessitate a change during the latter's junior year.

"It wasn't a real easy call because Kyle was a great quarterback," then-Santa Margarita coach Rick Curtis told The Dispatch in March. "So we were like, what do we do? We didn't want one to stand on the sidelines. We wanted to make sure that our best players were on the field."

Balancing the weight of arriving at a new school, while also developing bonds and rising to the leadership qualities called for in a Southeastern Conference quarterback, Costello toed the line between leading by example and in his words.

For Rogers, the transition has been more normal. A mid-year enrollee in the class of 2019, he arrived at MSU in time for bowl practices as a three-star passer and the lone quarterback in Joe Moorhead's final recruiting class of his tenure. Awe-struck a touch by his first taste of college football, opportunities were limited, though he was effective.

After watching his first pass as a Bulldog slip out of his hand, Rogers fired a completion the following rep during his first ever practice. A 4-for-4 afternoon ensued days later.

"He ripped the ball, went 4-for-4, made good, quick decisions and kind of gave you, like Garrett (Shrader) did last year, a good glimpse of why he was 38 touchdowns, three picks and 3,600 yards this year," Moorhead said at the time.

Throughout camp, both Rogers and Costello have received their share of praises that are perhaps most rooted in their offseason work together. A Brandon High School alumnus -- the same school that bred former Washington State quarterback Gardner Minshew -- Rogers ran a comparable offense to what Leach runs during his prep days.

As for Costello, he conceded he spent ample time in the film room at Stanford flipping to the Cardinal defense's video packages during Washington State week and throughout his time in Paolo Alto to further grasp what made the Cougar offense tick despite its on-paper simplicity.

With a hearty dose of what they'd be expected to run come fall camp, Costello and Rogers got to work. The pair helped run player-only practices three times per week during the offseason. Dipping through his bag of past sessions at Stanford, Costello pushed the Bulldogs through one-on-ones, seven-on-seven and even, at times, 11-on-11. Limited chalk talks also occurred, though Costello assured the offense is learned as much on the field as on a dry erase board.

"I mean, we got in the classroom and drew up base concepts of this is that, this is that." he said. "But a lot of this stuff is just picked up through practice, to be honest. It's not necessarily as much theorizing in the classroom that we would do quite a bit where I came from."

Ten days shy of MSU's visit to Baton Rouge, Costello said Leach has yet to officially anoint him the starter, though he's received the lion's share of first team reps in recent days. Rogers too has more or less secured the second-string quarterback slot with Shrader's move to receiver last week.

And though competition continues between Costello and Rogers, there's a feeling of comfort between the two. Down time is spent on the golf course together, where Rogers says Costello is "100 percent" the better player. Costello even says Rogers reminds him of himself as a freshman, though not in an arrogant manner. Rather, it's in Rogers' eagerness to play and energy on the practice field.

Stadium capacity is expected to be limited at Tiger Stadium when the Bulldogs trot out of the tunnel Sept. 26 due to COVID-19-related restrictions. But whether it's under the usual roar Death Valley normally affords or tempered shouting, it will be two of the newest signal-callers in Starkville leading the way under center when MSU heads out for its first possession.

"When (Costello) comes off he says, 'Oh what did you see?' or 'What were you thinking?' and when I come off he tells me what he was thinking," Rogers said Tuesday night. "It works both ways. We work together and I hope he does great things this year."

1. Inside the development of Mike Leach's viral bandwagon and the marketing team that brought it to life COLLEGE SPORTS

2. How good does Mississippi State's defense have to be with Mike Leach at the helm? COLLEGE SPORTS