No. 1 Green Wave set to clash with No. 3 Tigers Friday 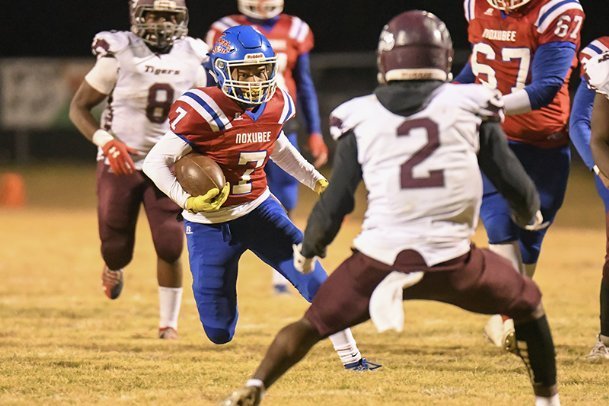 Noxubee County running back Damian Verdell carries the ball during a playoff game against Coahoma Agricultural on Nov. 8 in Macon. Photo by: Austin Frayser/Dispatch file photo

The four-time defending state champion Green Wave (1-1) are ranked the top team in Class 5A in the latest Associated Press media poll, while the Tigers (2-0), who lost in the state title game last season, came in at No. 3 in Class 3A.

"The guys get up for this type of game," Noxubee County coach Teddy Young said. "They live 25 minutes down the road from each other, so a lot of the kids know each other. Obviously there's a big opportunity here. West Point is a state championship program. It's going to be a physical, hard-fought game."

Despite both teams having standout seasons in 2019, last year's matchup between the two games was a complete rout, with West Point dominating Noxubee County 52-7.

Young said his defense is much more experienced than a year ago, considering nine starters have returned. In its first two contests, Noxubee County has only allowed a combined 13 points.

The Tigers have accumulated five sacks already, with standout defensive lineman Travorus Hatcher leading the team with two. But stopping the run against West Point will be much more crucial than the pass rush Friday, as West Point leans on running backs Cameron Young and JaKobe Pate, both of whom went over 100 rushing yards against Starkville, to spearhead their rushing attack.

"Watching film, those guys both run the ball hard," Young said. "To try and slow them down, we're going to need multiple people to flock to the ball. Both running backs run so hard that it's hard to think one person alone is going to bring them down."

On the flip side, West Point coach Chris Chambless praised the Tigers' defensive front and said his team knows not to take any opponent lightly, despite any past results.

"They're very quick up front," Chambless said. "It's going to pose a challenge anytime you face a front like that. Overall they have great team speed and play within themselves. I think this year they're more competitive and seem more comfortable. I think the coaches did a great job coaching them up and getting ready to play."

Meanwhile, if history is any indication, West Point has already suffered its lone loss for the season in its season opener against Starkville. The Green Wave have never been beaten more than once in the regular season the last four years.

After falling to No. 1 overall Starkville in Week One, Chambless liked what he saw from his players in a bounceback win against Tupelo in Week Two.

"I think our guys did a good job of mentally staying in the game and sticking together and not panicking," Chambless said. "Against Starkville, I think our kids panicked a little bit. Against Tupelo, we stayed together. I liked how our kids were on the sidelines supporting each other and having their backs."

Defensively, Chambless and company will be tasked with slowing down quarterback Chrishaad Rupert, a dual-threat signal caller who has thrown for 307 yards and two touchdowns in 2020. Bobby Shanklin is the Tigers' top threat out of the backfield, running for 203 yards and five touchdowns thus far, including 113 rushing yards in a 33-13 win over Philadelphia last week.

"We're going to have to be Johnny on the spot on defense to stop them for sure," Chambless said.