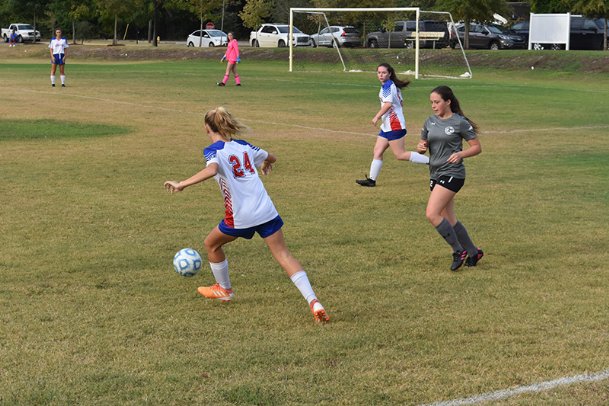 Heritage Academyâs Chloe Boyd (24) moves the ball away from a Laurel attacker as teammate Hanna Hardy, back, maintains a defensive position. Photo by: Garrick Hodge/Dispatch Staff

"Do not come off the gas!" Velek shouted from the Heritage Academy bench.

Freshman Chloe Boyd scored six minutes later to give Heritage Academy some breathing room and added another goal within the final 10 minutes to give the Patriots (5-5) a 3-0 shutout win over the Hawks on Tuesday.

"We kind of dominated from beginning to end, and we're clicking," Velek said.

With Boyd and Peal bringing the offense, Kelly Bell and Destinee Flowers locking things down on defense and Haven Tuggle turning away the few chances she faced in goal, the Patriots looked solid in all phases of the match.

But most important, Velek said, was that the Pats kept adding on when it needed to.

"Our team has a tendency to feel like they have a game in hand, and so they stop," he said.

Senior right winger Sarah Curtis said she and her team know that habit no longer flies with Velek -- no matter the score.

But the Patriots didn't need a 6-0 cushion -- nor a water break -- to beat the Hawks on Tuesday.

They maintained possession in the attacking half of the field nearly all evening, getting chance after chance on goal. After Peal scored from close range in the 15th minute, Boyd steered in a shot from a tough angle on the left border of the penalty box.

Velek said he was glad to see Boyd rebound after a series of matches where she hadn't been connecting on her shots, routinely missing wide or high.

"This was one of her best games," Velek said. "It was really nice to see her back in the groove."

Boyd scored from even further out on the left side in the 74th minute, using her strong left foot to curl the ball in from distance.

"She just keeps progressing every single year," Curtis said. "She's our only real left-footed person, so it gives us an advantage."

Curtis, who returned Tuesday from a fractured fibula -- she was out just three weeks -- said she and Boyd formed a strong duo of "opposites" on the right and left sides, respectively.

With just one district win and only one more district match to play, Heritage Academy won't qualify for the postseason this year. But the Pats have three more regular-season matches to play in order to extend their string of winning seasons to three. That's what matters, Velek said.

"Our goal is kind of to change the trajectory and the mindset of Heritage girls soccer," he said. "We're disappointed we missed the playoffs, but if we can pull off a winning season, then that's good for us."