'He makes us go': Starkville Academy running back CJ Jackson making strides every day for Vols 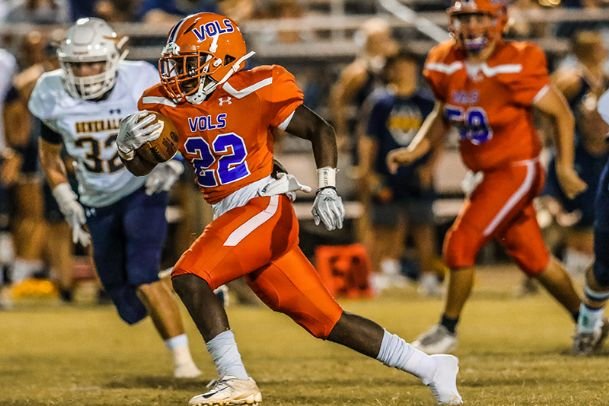 With 30 yards and 11 Magnolia Heights defenders between him and the end zone, the odds of coming up short were pretty high. But with Jackson's Starkville Academy team down three points in a win-or-go-home playoff game, the junior running back didn't care.

He turned to coach Chase Nicholson and delivered three words: I got you.

The Vols had once trailed 23-0, but they were back in the thick of things thanks to a blocked punt and two Jackson scores. Nicholson planned to attempt a long, tying field goal if Jackson couldn't convert on the play, but the running back made his intentions clear: It wouldn't be necessary.

"Even though we had faith in our kicker, I just knew I had that chip on my shoulder," Jackson said. "They were not going to tackle me."

He took the snap and ran right, feeling Chiefs defenders pull at his legs. He shook them off. They tried to jump on his back to bring him down. He threw them to the ground. Suddenly, he was clear.

"At that moment, God was on my side, and I got in the end zone," Jackson said.

His go-ahead score led to a 35-30 Volunteers win in that first-round game in Senatobia, keying a playoff run that lasted until the MAIS Class 5A championship game. For Jackson, who left Noxubee County for the Volunteers prior to his sophomore season, it was a signature moment.

He's made even more this year for Starkville Academy.

Jackson has already rushed for more than 1,000 yards in his first five games this year, and just like that fateful play in Senatobia, nobody can bring him down.

With two mammoth games in the past two weeks, he's hoping to take the Vols to the very top in his final high school go-round.

"It's just been a great time at SA," Jackson said.

One day, Jackson's mother had a fateful question for him: "Do you want to go here?"

"Here" was Starkville Academy, which Jackson's mom had heard good things about. Jackson was familiar with the school -- particularly its football team. The Volunteers, he knew, had just won an MAIS Class 4A title in 2017.

"They're pretty good," he thought.

Noxubee County, too, had just won a state championship that season, but Jackson ultimately decided on a change.

He enrolled at the school for his sophomore year and set out from Macon on the first day, smiling ear to ear when he and Nicholson met for the first time.

"You could tell he was very excited about his opportunity to come here and be a part of this," Nicholson said.

In Jackson's new locker room, happy to see his arrival, his new teammates screamed his name to welcome him in -- "just like family," he said.

He already knew his choice to transfer was going to pay off, and that feeling never wavered.

"It's been the best decision of my life," Jackson said.

Right away, he got on the field. In the first game of the season, against Lamar School, Jackson came in for one play. He didn't get a carry, just a blocking assignment. There was a penalty on the play.

But Jackson wasn't concerned about when his role might grow bigger. He just stayed patient.

"I've been on the sideline before," he said. "I knew when my chance came, I had to seize the opportunity."

The shot Jackson was waiting for came sooner than he expected. A lot sooner.

Though seniors Taylor Arnold, Will Miller and Nason Heflin were all ahead of the newcomer on the depth chart, Miller and Heflin began to spend more time playing defense, and Jackson's role increased.

In the Vols' next game, against French Camp Academy, he earned eight carries. Against Pillow Academy in Week 7, he started and did well enough to be named the Brian McCaskill State Farm Player of the Week. He went for 115 yards and two touchdowns against Canton Academy the week after that.

When all three seniors graduated in 2019, Jackson seized his chance to be SA's feature back.

His familiarity with his no-longer-new team improved, too.

"I was pretty quiet when I came in," Jackson said. "Now I'm used to everybody; everybody's used to me. ... We're tight."

But after he helped Starkville Academy make comeback after comeback -- turning on the jets to beat Mag Heights, Lamar and Adams County Christian late -- in its run to the state title game, Jackson suddenly found himself staring an abrupt end to his football career in the face.

When COVID-19 hit in March and shut down just about everything, Jackson was almost sure he wouldn't get one last year to take the field.

But he still made preparations for a strong return. He worked out wherever he could, coming to C.E. Logan Field almost every day to improve his conditioning, practice running back drills and catch passes. Charlie Cox, Randall Futral, Brody Pierce, Porter Skelton and other players joined Jackson, but the running back's ethic was unmatched.

This fall, that effort has paid off in new ways for Jackson. He scored three touchdowns in a road win over Mag Heights on Sept. 11; he went for over 300 yards in the loss to Leake.

"He's a huge part of the offense," Nicholson said. "He makes us go. We're a running football team, and when you've got a running back who's putting up those kinds of numbers, it really does some good things."

After more than a year and a half of great production as Starkville Academy's starting running back, Jackson's lofty goals have become evident to Nicholson.

But next up for Jackson is one of the few goals he has yet to achieve: winning a state title for the first time.

Jackson said he thinks it's possible this year for the Vols, who are 2-2 with close losses to Lamar and Leake, but they must keep "a level head" to do so. Starkville Academy had more than 500 yards of offense against the Rebels last week but still lost 49-45, and they need to be even more dominant on offense and better on defense going forward.

"That's what we're working toward every game, every week," Jackson said.

If he can put his name out there in the playoffs or state championship game -- or excel in camps come spring 2021 -- he should have the opportunity to reach another milestone: receiving an offer to play football in college.

Despite his production, Jackson hasn't had any luck yet. But his coach knows Jackson is too good for that to last: At some point, Jackson will have an opportunity.

"His time will come," Nicholson said. "His chance will come."