Take It Easy: A history of the air raid and how it functions in its simplicity 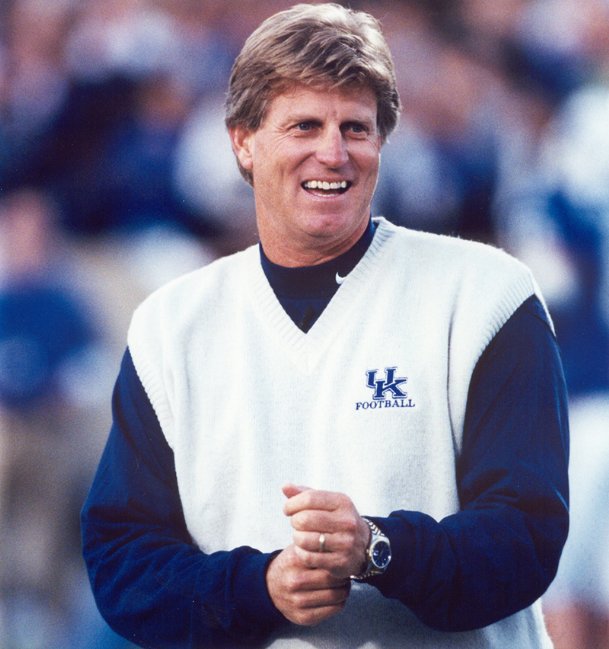 Hal Mumme is among the architects of the modern passing game. The Godfather of the air raid offense. Photo by: Photo courtesy of Kentucky Athletics

STARKVILLE -- Hal Mumme is among the architects of the modern passing game. The Don Corleone of aerial assaults. The Godfather of the air raid offense.

He designed the air raid in the mid-1980s as the head coach at Copperas Cove High School in Texas, before bringing it to Valdosta State, Kentucky, New Mexico State and more. Imparted to the wider college football world at Texas Tech, Washington State and now, Mississippi State by Mumme's former assistant, Mike Leach, the offense has long been lauded for its simplicity. The root? The Eagles.

Listening to co-lead singer Don Henley run through his roster of talent, Joe Walsh on guitar, Glenn Frey on vocals, and on, Mumme identified with Henley's characterization of letting the artists rely on their natural talents.

"I was listening to (Henley) being interviewed, and they asked them how they became the best and he said, 'Well, we had a great capacity for boredom,'" Mumme recounted.

"So I started using (that line) with our teams starting probably in the early '90s, but (the air raid) is just that way," he continued. "(The players) just get so good and so instinctive that whatever their God-given abilities are, we're not taking any of that away by creating doubt or creating confusion."

Beginning his head coaching career at Copperas Cove, Mumme concedes he worried his simplistic approach wouldn't work. Yet now almost 44 years on from his first coaching gig as the offensive coordinator at Corpus Christi Moody High School, defenses are still struggling to contain the system he and Leach developed.

In eight years at Washington State, Leach authored an air raid-based unit that led the nation in passing five times and never finished worse than ninth nationally in total passing offense. Over that span, he also became the second-winningest head coach in program history since World War II.

"From a simple learning standpoint, it's probably the easiest offense in the country," USC offensive coordinator and former Texas Tech quarterback Graham Harrell told The Dispatch. "From a mastery standpoint, it takes time, it takes reps. And like I said, that's why the longer (Leach is) at a place, you see the offense get better and better because the young guys master it."

So how does an offense that's celebrated for its simplicity work? In practice, the air raid is based on a collection of anywhere from 15-25 plays. Mumme estimates one could run his and Leach's system at the high school level with around eight -- four verticals, mesh, sail, Y-cross, and wide receiver and running back screens to the left and right.

Even the verbiage of a play calls in the air raid is simplistic. Mumme said he kept everything five words or less. If it was more, a codename was used. For example, Blue, Z-move, 92, H-wheel became "Blue Cobra."

Under-center, things are further simplified. Pre-snap reads and calling the offensive line's blocking approach are staples for most modern quarterbacks. Mumme and Leach threw that out. Instead, the center handles blocking assignments. Option routes based on where a defensive player moves give receivers flexibility to make plays. The quarterback throws to space.

Former Copperas Cove and Iowa Wesleyan quarterback Dustin Dewald, who Mumme calls the original air raid quarterback, said he spent hours upon hours with his receivers practicing timing. On game day, those reps and understanding of where his teammates would be on a given route allowed him to "throw to grass" as opposed to an exact person.

"It's all reps," Dewald told The Dispatch. "Those quarterbacks and receivers are working together not only in practice but all the time on different options of ways to run routes and then understanding where the quarterback is going to throw the ball based on where the defender is on the receiver because you can throw the same route to a lot of different spots."

Following the offense's musical roots, there's a rhythm in how Mumme and Leach's quarterbacks approach their craft. Their eyes and feet are expected to be connected. Mumme explains that in four verticals, the quarterback takes a three-step drop from the shotgun. With the first step, he looks to the Z receiver on a deep route. On the second step, one's eyes move to the Y receiver on a crossing route. The third step shifts to the H on an option pattern. If forced to step into the pocket, the look is to a backside receiver on a curl flat route.

"We just have one rule: Never pass up an open receiver, and never throw to a covered one," Mumme said.

Among the iconic plays in both air raid and college football history is Harrell's 2008 touchdown pass to Michael Crabtree with one second left that led a Leach-coached Texas Tech team to an upset of then-No. 1 Texas in Lubbock.

Down by one at the Texas 28-yard line, even the drive to that point was poetically on brand for the air raid offense. The Red Raiders had promptly marched 34 yards on five passing plays, all of which Mumme says were the exact same call.

Lined up in a four-wide set with two receivers on either side of the formation, Leach again called the four verticals play he and Mumme pioneered in the late 1980s and early 1990s.

The look was, naturally, simple. Crabtree -- the winner of the Biletnikoff Trophy the year before honoring college football's top wide receiver -- was lined up against then-sophomore Curtis Brown. Harrell just had to make the throw.

"Everybody thinks it's a miracle play," Mumme said. "Really it's not a miracle play. It's a routine play. It just happened to be with six seconds left in the game."

"You just execute it better than anyone else in the country," Harrell added of why the air raid's simplicity is effective. "That's the beauty because you're only practicing 20 plays too. You run these plays against every look, against every blitz. You're not trying to call a perfect play into a perfect defense. You're just calling what you do well against anything."

At MSU, senior K.J. Costello is the latest signal caller to take the reins of the largely original air raid offense. Over the summer, Costello asked the Bulldogs' video staff for clips of Harrell and former Washington State quarterbacks Gardner Minshew II and Anthony Gordon.

A self-proclaimed "football nerd," the former Stanford passer dissected each frame. He took particular note of the way Harrell moved in the pocket and the efficiency with which he guided the offense.

"It's a philosophical difference," Costello said through a laugh of how it compares to the pro-style system he ran at Stanford. "I could sit up here all day and talk to you about it, but at the end of the day we really are just trying to do our thing and do it fast and do it right."

Online there's an alleged version of the playbook Mumme brought with him to Kentucky in 1997. He says it's a fake. Mumme has never had a playbook. That'd be more complicated than the air raid would necessitate. Instead, he sides with a lesson learned from the opening track of The Eagles' self-titled debut album: Take It Easy.

"Mike is probably more pure than I am at this stuff," Mumme said. "... It goes back to our saying, you have to have a great capacity for boredom. Mike does. He doesn't mind doing the same things over and over again. And that's why he's always had great success, particularly at four verticals."