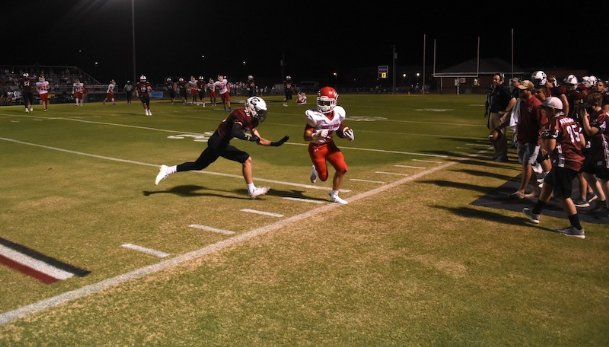 Heritage Academy wide receiver Harris Gunter (5) steps out of bounds after making a catch at Caledonia. The Patriots have won four straight games ahead of Friday's contest at Pillow Academy (4-1). Photo by: Garrick Hodge/Dispatch file photo

Heritage Academy's two matchups with Pillow Academy last season were as different as can be for a team that finished with a 14-0 record.

The first game was close (for the 2019 Patriots, anyway) with a 26-13 final score, the Pats' second-slimmest margin of victory. The second, in the MAIS Class 5A semifinals, was pure Heritage Academy domination: a running clock; a 47-14 win.

The Pats play Pillow again Friday -- in Greenwood, this time -- and they hope the contest will resemble the second game a lot more than the first.

"It's a big district game to show everyone that we're going to be the best team in the district again this year and just go out there and compete," sophomore wide receiver Trey Naugher said. "They're a great team, and we've just got to come out there and play."

The Patriots have followed a similar path, beating Kirk, Magnolia Heights, Caledonia and Bayou Academy after losing at Jackson Prep in their season opener.

"They've gone out the past four weeks and done what they've supposed to do, and I hope it's built confidence," coach Sean Harrison said.

Harrison said every win is a validation for a team he knows is extremely talented.

"We can, as coaches, sit here and tell them how good we think they are -- 'You need to do this, this and this to get better' -- but until they actually see it, they won't believe it," Harrison said.

Beating Pillow -- which, like Heritage Academy, lost a large senior class after last season -- would help the Pats gain even more confidence. Harrison said the Mustangs put in a new, run-heavy offense that is improving every week, and stopping it will be critical.

But Heritage Academy's own run game is much improved, too. Braden Davidson and Jaylan Stewart each ran for 87 yards last week against Bayou, strengthening an offense led by sophomore quarterback Mack Howard.

It's added a new dimension to the Patriots' offense, Harrison said, after Caledonia's pass rush came after Howard play after play and sacked him often.

"We've got to get this thing to where folks can't just pin their ears back every snap," Harrison said.

If the Patriots can do that again Friday, they stand a solid chance of beating the Mustangs and improving to 5-1. Howard thinks that's more than possible.

"At the end of the day, we've just got to do what we do and just play the way we play," he said. "I think everything will work out."

West Point has faced Lafayette a remarkable four times in the past two years.

In both 2018 and 2019, the Green Wave beat the Commodores in the regular season and again in the playoffs en route to MHSAA Class 5A titles. None of the games was decided by more than seven points

The fifth contest between the two teams since 2018 is Friday at Hamblin Stadium in West Point, the newest edition in a matchup that has, understandably, become sort of a rivalry.

"When our kids think of Lafayette and their kids think of West Point, there's a little extra added punch to it," Green Wave coach Chris Chambless said.

The contest is also the first Class 5A, Region 1 game for both teams, and Chambless said he doesn't want the Green Wave to get behind with six more district games to come.

"We want to win every one of them," he said.

To start that off Friday, West Point will have to account for several star Commodores, including cornerback Brendan Toles -- a Mississippi State commit -- quarterback Tyrus Carmichael-Williams, wide receiver Kylen Vaughn and running back Trikyus Woodall.

"We've got our work cut out for us," Chambless said.

It's No. 1 vs. No. 2 as Starkville High School heads to South Panola for a date with the undefeated Tigers.

With his team still recovering from a slew of injuries, Starkville head coach Chris Jones is hoping two or three of his six injured guys can return Friday as the Yellow Jackets slowly nurse their way back to full strength.

Despite that, Jones' squad does still boast the rocket arm of four-star Florida State commit Luke Altmyer. Through three games this fall, Altmyer is 47 of 68 for 670 yards, seven touchdowns and zero interceptions. The future Seminole has also flashed a renewed focus on incorporating the run game into his performance, totaling 121 yards and two scores on 20 attempts.

Beyond Altmyer, it's unclear how healthy starting running back and Mississippi State commit Amariyon Howard will be Friday. Howard suffered a lower-body injury and has been limited in practice thus far. In his place, junior Jordan Mitchell raced to 133 yards and a touchdown on just 10 touches against Meridian. Just as impressive? Mitchell didn't lose yards on a single carry.

"We've got some young kids in there who we didn't expect to play this early, but they've got to play and have been doing a solid job," Jones said. "They're getting better with every play, every snap. So if they have to play we'll do our best to make sure they're ready."

Since becoming an assistant coach at Starkville Academy in 2009, Chase Nicholson has seen the Volunteers play Washington School every year but two.

The Generals won their second straight state title in Nicholson's first year with the team and claimed championships in 2011 and 2015 as well.

"They've got a history of winning and knowing how to win," Nicholson said.

It's why the coach knows he can't take the Generals lightly in Friday's road game despite Washington's recent struggles.

The Generals haven't won since beating Centreville Academy 43-40 on Aug. 21, but they have a lot of solid athletes around the field, Nicholson said. Washington runs a 3-4 defense while Starkville Academy employs a 4-3 scheme, but the teams are fairly similar on offense.

"Like always, it's going to be a challenge, as it should be," Nicholson said.

The Vols are coming off a 49-45 loss to No. 3 Leake Academy in a shootout at home last week. Running back CJ Jackson and a passing game led by quarterback Randall Futral are working excellently in tandem and could be the key to a win over Washington this week.

"We've got a lot of weapons in different places," Nicholson said.

"We left a lot of points on the board," King said. "We gave up a lot of yards on the ground. We didn't execute our game plan to a T."

But still, the Panthers kept the margin to 15 points, perhaps a good sign for the weeks to come.

West Lowndes will get a much easier task this week in winless Vardaman, which it beat 42-7 on the road last year. King said the Rams like to throw the ball, which makes pressing wide receivers and pressuring the quarterback paramount.

West Lowndes will also finally get its first home game of the season Friday.

Their road contests have been tough games, too. The first was at Class 3A Kemper County, which fielded a much bigger roster, while Nanih Waiya has won the past two Class 1A titles.

Mistakes on offense and defense cost the youthful Panthers in those two games, but King hopes his team can fix the issues starting Friday.

"If we get them straightened out, it should help us a lot later on this season," he said.

Columbus Christian Academy has a good chance to pick up its first win of the season Friday in De Kalb.

Columbus Christian is coming off a 38-6 home loss to Deer Creek Academy.

The Patriots have lost to North Delta and Kirk Academy and boast wins against East Rankin Academy, Myrtle and Rossville Christian Academy (Tennessee).

Oak Hill is coming off a 33-0 home loss to Winston Academy last week.

After picking up its first win last week against Kemper Academy in Pheba, Hebron Christian School hits the road again to face another winless team.

The Eagles can grab a second straight win by beating the Black Knights on Friday in West Memphis, Arkansas.

Victory is coming off a 66-44 win over Tabernacle Christian (Alabama) last week.