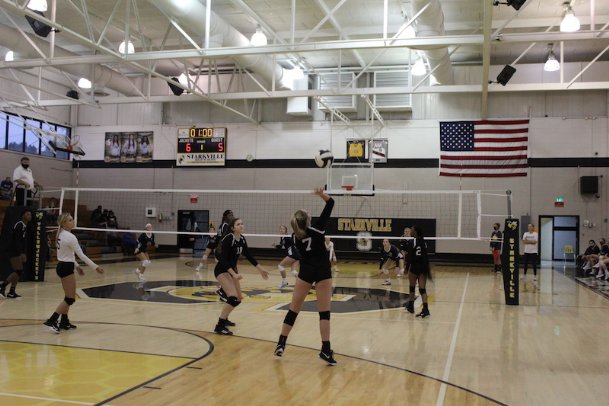 Starkville's Abbigail Upchurch takes a shot during the first set of Thursday's home match against Regents School of Oxford. Upchurch led the Volunteers with 12 kills in the sweep. Photo by: Theo DeRosa/Dispatch Staff

STARKVILLE -- In the Starkville High School volleyball team's first match of the season Aug. 24 at Regents School of Oxford, the Yellow Jackets jumped out to a 2-0 lead.

But the Lions stopped the run by winning the third set, 25-21, before the Jackets took the win with a 25-11 fourth set.

Exactly a month later, before Thursday's match against Regents at The Nest in Starkville, the Jackets remembered that season opener and resolved to handle things differently this time.

"'They can't take another game off of us," Starkville coach Sierra Pittman said her team agreed. "We've got to win these three in a row so we can keep that momentum going."

Regents threatened to put a stop to Starkville's plans for a sweep in the long second set. The Lions roared back from a 23-15 deficit by recording the next nine points, landing them one point shy of clinching the set and tying the match.

"We got too comfortable," Starkville senior Jakailyn Brown said.

But on the next point, the Jackets' Zoe Elder flipped the ball lightly over the net, where it dropped in between several defenders, to keep the set going. Despite the massive moment, the Jackets remained mostly calm.

"When we tend to panic, we give a lot of points away," Brown said.

Pittman pointed out that her team's calmness, though necessary, was combined with silence; the Jackets were failing to communicate as needed on the court.

"They weren't talking as much as they needed to be -- helping each other, telling them where to go, how to go, why to go somewhere," Pittman said.

But Starkville picked it up, and after the two teams traded the next four points, the Jackets managed two straight and took control of the match. They held off the Lions in a 25-17 third set to earn the sweep.

Abbigail Upchurch led Starkville with 12 kills, Brown had five blocks, and Mallory Williams had eight digs. Pittman credited the play of Williams, typically a junior varsity player who was nervous about moving up Thursday night.

"She gets kind of scared, and she doesn't think she's able to go out to the varsity level and play yet," Pittman said. "She definitely showed out. She did very, very good tonight, so I'm proud of her."

Pittman pointed to Regents' strong defense as an example of what she wants to achieve for her team, echoing the Lions' strategy to Williams before the match.

"I told her, 'Sprawl out,'" Pittman said. "'Don't let anything drop. You drop before the ball drops, you'll be good.'"

Williams was more than good, making several great plays to save points in the third set. She was one of several Jackets typically reserved for the junior varsity squad who made up for the absences of Brayland Ferguson and Karlie Rogers.

"They did very, very good at stepping up and showing out, especially since they're not used to the varsity level of play," Pittman said. "I'm proud of them in that aspect."

TUPELO -- New Hope volleyball lost a regular-season match for the first time this year with a straight-set loss Thursday at Tupelo.

Hudgins, who had three aces for the Trojans, led with two blocks, while Nettles, MaKayla Johnson and Zoe Goodman each had one.

New Hope will play at South Jones at 7 p.m. Tuesday in Ellisville.

Libby McMurphey and Kordelia Bergstrom each had six kills to lead Caledonia (11-4), while Bergstrom, Emily Clark and Megan Chandler tied for the team lead with three blocks apiece.

Clark had five aces and a team-high 34 assists, while Emma McKee had eight digs.

Caledonia's next match is at 6:30 p.m. Tuesday at Shannon.

Mia Kate Cade and Chloe Hardin had goals for the Volunteers.

The Vols will play at Tupelo HomeSchool at 4 p.m. Tuesday.