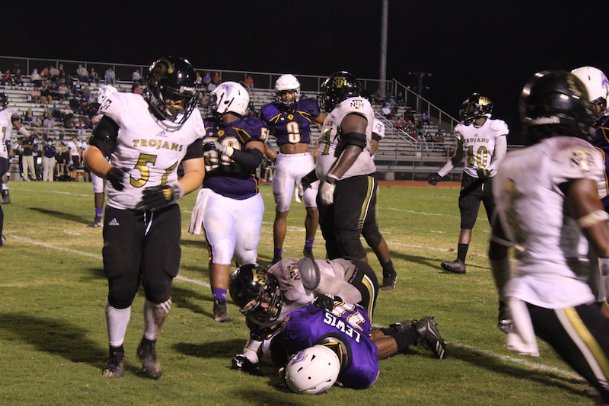 Columbus running back Jakailyn Lewis is tackled on a fourth-down run in the fourth quarter of Friday's home game against New Hope. Lewis moved the chains for the Falcons, who went on to win 23-7. Photo by: Theo DeRosa/Dispatch Staff

Bryson Lanier knew it was time.

With the Columbus High School football team leading 3-0 and into New Hope territory early in the second quarter Friday, the junior was ready for his team to unleash the clever play the Falcons had practiced all week.

On the key fourth down, Columbus snapped the ball to quarterback Ethan Conner, who handed it to Tawonn Troop just before Conner broke to the right side, Lanier threw a block and Troop took off down the middle, making his way down to the New Hope 1-yard line.

"That had been in the playbook for a while, but we were just waiting for the right time to use it," Columbus coach Joshua Pulphus said.

Conner punched in a 1-yard score on the next play, completing a key drive that gave Columbus the cushion it needed. The Falcons (1-3) picked up their first win of the season, a 23-7 home victory over the rival Trojans (1-3) to get Columbus off to a 1-0 start in MHSAA Class 5A, Region 1 play.

"This is how you get to the playoffs," Pulphus said. "These games matter. So anytime you start off 1-0 in division, you put yourself that much closer to the goal in mind. ... Anytime you can beat your crosstown rival in a game, that's even sweeter."

Columbus achieved its win with another standout performance from its defense and its offense's best game of the season to date.

Conner added a 14-yard touchdown pass to Michael Williams late in the second quarter, and Michael Mosley tacked on a 4-yard scoring run in the fourth quarter. The Falcons scored more points Friday than they had in the first three games of the season combined.

"It's good to see us get first downs and continue to put drives together," Pulphus said. "We were excited and happy about that."

Where the Falcons' offense shined, its defense was just as stingy, particularly early on. Columbus foiled New Hope on drive after drive in the first half, arresting the Trojans' momentum with sacks and taking advantage of several self-inflicted New Hope fumbles that pushed the Trojans back.

"That's a really good defensive ball team over there," New Hope coach Wade Tackett said. "Credit to coach Pulphus and what they've done. But we still have a long, long district schedule ahead of us, and we're going to have to figure out a way to generate some points."

Trailing 16-0 at halftime, the Trojans turned to the passing game in the second half and found considerable success. Quarterback Zac Butler continually found open receivers downfield -- often because of blown assignments by Columbus, Pulphus said -- and New Hope moved the ball well.

With 5 minutes, 20 seconds to go in the third quarter, the Trojans got their first score of the day as Butler found Dearies Smith from 8 yards out. Smith appeared to fumble right around the goal line, but he was credited with New Hope's first touchdown, and Cole Crawford knocked the extra point through.

Columbus fumbled the ensuing kickoff, giving New Hope a gift at the Falcons' 29-yard line. But the Trojans couldn't convert, going short of the sticks on fourth down and giving the ball right back.

"When the defense gives us those gifts and the special teams gives the offense a gift, we've got to capitalize and put some points on the board," Tackett said.

Tackett, whose team beat Aberdeen 13-12 on Sept. 18 for its first win of the season, said his inexperienced offense -- with only a couple seniors on that side of the ball -- is still figuring things out.

"We feel like that's something we can grow on with this season," he said.

Pulphus credited the Trojans' offensive performance in the second half, particularly against a defense as talented as the Falcons'. Columbus has allowed just 10.5 points per game through its first four contests.

"We knew they were going to make some passes, make some runs," Pulphus said. "We just wanted to be able to sustain it."

While Columbus' offense and defense were mostly solid Friday, Pulphus pointed out that the Falcons' special teams still need to improve. While Darion Mosley knocked through a 41-yard field goal in the first quarter, Lanier fumbled a punt early before recovering it, Michael Mosley muffed a punt and handed the Trojans the football in the third quarter, and a fumbled kickoff after New Hope's touchdown gave the Trojans a shot to get within a point.

"That's been the thing that we kind of take pride in," Pulphus said of Columbus' special teams. "We just weren't clean like we needed to be, so that's something where we definitely need to go back to the drawing board and make sure we get it clean for next week."

The Falcons' next game is at Center Hill (3-1) on Oct. 2 in Olive Branch. Now that Columbus has its first win, Lanier said, its second should be soon to follow.

"When we start going, ain't no stopping," Lanier said. "We've got to take care of business."