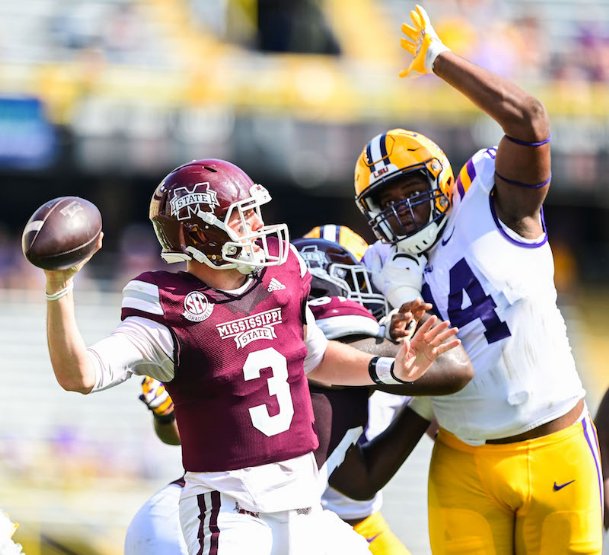 Mississippi State quarterback K.J. Costello drops back for a throw during Saturday's game at LSU. Photo by: Chris Parent/LSU Athletics

BATON ROUGE, La. -- Most Mississippi State fans didn't even know if they'd even see their team play football in 2020.

Most Bulldog faithful I talked to in the early days of August didn't care if they lost their opener 56-0, so long as they got to play. They certainly didn't expect to be leading defending national champion Louisiana State by 10 points in the fourth quarter. Or for new quarterback K.J. Costello to set a single-game school record by throwing for roughly a billion yards.*

*That number is unofficial, last I checked*

This year has sucked, to put it mildly, for so many people. I can only imagine the exhilaration MSU fans felt watching the new look Bulldogs going into Baton Rouge and upsetting defending national champion and No. 6 LSU, 44-34.

Welcome to Starkville, Mike Leach. After this win, I bet any restaurant in town will offer the self-proclaimed pirate all the crawfish he can eat this week.

This is a hell of a way to kick it off, but for the second year in a row, The Commercial Dispatch will bring you an instant reaction blog of Mississippi State football games posted immediately after the final gun filled with short observations and commentary. A little shameless company promotion, but we got much more coming tonight, including gamers, sidebars and a column later.

There's a TON to get into here, so let's get right to it.

- There were a lot of big offensive plays, OK? I'm probably not going to get to all of them.

- The story of the day is obviously Costello. The first time the guy ever suits up in maroon and he breaks Dak Prescott's single-game passing record (508 yards in 2015) with nine minutes to spare. Then, he goes and breaks the all-time record for most passing yards ever in an SEC game, passing Georgia's Eric Zeier (544) after throwing for 623 yards and five touchdowns. That's also the first time any player at Tiger Stadium has thrown for more than 500 yards. It's hard to fathom how that kind of performance would leave anything to criticize, but three turnovers (especially two late) show that there's still some progress to be made.

- Sixty passes, 16 running plays for Mississippi State. The game took about four hours. Welcome to the Leach era, folks. Gonna be a tough few years for the "run the damn ball" crowd.

- The front seven of the defense looked downright impressive at times. MSU had an effective pass rush, accumulating seven sacks Saturday. On the flipside, that youthful secondary definitely played like an inexperienced unit later in the second half.

- Don't want to take anything away from MSU, but you could tell the LSU secondary wasn't the same without Derek Stingley, who had to miss this contest to an illness not related to COVID-19.

- Rough start for the offensive line the first two drives. The first drive ended in a three-and-out following K.J. Costello getting sacked, then the Bulldogs had to settle for a field goal following another third-down sack on the second series. That's not even mentioning a holding penalty that almost prevented the field goal in the first place. That unit seems to be a work in progress.

- Speaking of that sack, the flag on the facemask call was picked up, but Costello was clearly hit in the head. *Shoulder shrug*

- MSU offensive lineman Kwatrivous Johnson officially has a catch in the box score, and no one can ever take that away from him, damn it!

- At the end of the first quarter, MSU led 3-0. That's the first time LSU didn't score in a quarter since the third quarter of the Alabama game last year, which was seven (!) games ago.

- A botched snap from Cole Smith destroyed any chance of a scoring drive early in the second quarter. Just an unfortunate play.

- While the stats look good, Saturday wasn't all sunshine and rainbows for Costello. When your defense is having that kind of success early, then you throw a pick-six to Jabril Cox for LSU's first score of the day, that's a backbreaker.

- Speaking of Costello, the guy almost had 292 passing yards in one half alone. The season-high from last year was when Garrett Shrader threw for 238 yards against LSU.

- Erroll Thompson coming through in the clutch finishing off a critical goal-line stand on the opening LSU series of the third quarter to limit the Tigers to a field goal. He played like a senior.

- I don't know if LSU quarterback Myles Brennan was hit on that throw leading to an interception late in the third quarter, but he had a receiver open for an easy touchdown if he made a good throw. Instead, it goes down as an interception by Esaias Furdge.

- Official attendance said 21,124 fans were at Tiger Stadium. That's a lot of people, obviously, but the atmosphere clearly wasn't the same.

- You take the good with the bad in the air raid. The good: it's effective in putting up points! The bad: it doesn't take much time off the clock when leading by multiple possessions.

- Two back-to-back awful offensive possessions resulting in turnovers for the Bulldogs after going up 10 in the fourth quarter is not the formula for an upset.

- I think Mississippi State was fortunate it wasn't three straight drives with a turnover after the officials overturned a presumed Costello fumble. Considering the Bulldogs took a 37-34 lead on a field goal with 7:27 left, it was a big swing of events.

- What a day for MSU. Who knows exactly how many fans will be allowed into Davis Wade Stadium next week for the Bulldogs' home opener against Arkansas, but those that are let in will be foaming at the mouth for next week after all the momentum this game will bring.