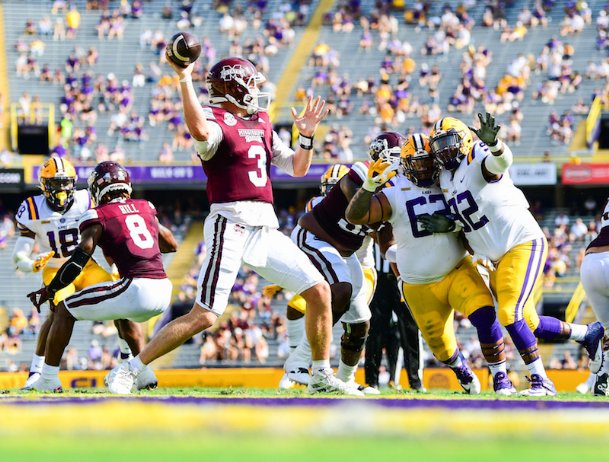 BATON ROUGE -- A pirate sailed into the bayou Saturday and left with more than treasure.

In the first game of the Mike Leach era, Mississippi State navigated its air raid offense to a decisive 44-34 victory over defending national champion and No. 6-ranked LSU in Baton Rouge.

If Leach was the captain Saturday, senior quarterback K.J. Costello was the first mate. Costello, a Stanford graduate transfer, provided aerial acrobatics seen by a select few signal-callers in program or conference history in southeastern Louisiana. He finished with 623 yards on the day, breaking Dak Prescott's single-game record and a 27-year-old SEC mark. His 60 attempts also stand as the most in an MSU history long on rushing stars, but shorter on signal-caller success.

"It ranks pretty high when you consider it's at LSU and playing the defending national champions," Leach said of where Costello's day sat among those throughout his 18-year head coaching career.

Costello, who noted in recently he spent his summer watching previously dynamic air raid quarterbacks Graham Harrell, Anthony Gordon and Gardner Minshew II, looked the part of the next great product of a system that's terrorized defenses from Division III to Southeastern Conference levels since its invention in the mid-1980s -- passing for 292 yards on 21-of-36 passing in the first half alone, a higher mark than any MSU quarterback reached in 2019.

But for all the passes aired out Saturday, there was a prescient patience in Leach's play-calling and division of the receptions from Costello. Between 2017 and 2019, MSU had two receivers go over 100 yards in a game. The senior trio of Osirus Mitchell, JaVonta Payton and Kylin Hill each eclipsed the century mark in Baton Rouge.

Mitchell provided the opening act. Racing past an LSU defender down the right sideline, he corralled the last of his five first half receptions for a 43-yard score that gifted MSU a 17-14 lead at the half in a version of Death Valley that felt more befitting of a funeral than the coronation of a past national championship team.

Payton proved a pill out of the slot and in motion. Moving from all corners of Mike Leach's wide-open sets, the Nashville native sprung loose on back-to-back wheel routes to set up a go-ahead field goal midway through the third quarter as LSU briefly showed signs of life in an otherwise anemic outing from Joe Burrow replacement Myles Brennan.

Following a 37-yard dime from Brennan to Terrace Marshall, MSU's ensuing play saw Costello loft a swing pass to Hill streaking toward the Bulldog sideline. Outpacing the LSU secondary, the Columbus native burst into the end zone for a 75-yard score.

"I cramped up a little bit and I went into the tent and I came back out and he had like 300-something, 400-something (yards)," sophomore linebacker Aaron Brule said of Costello.

On a day in which the Bulldogs wore the same maroon-topped, white-bottomed uniform combination they donned when Prescott carried MSU to a victory in Baton Rouge during the storied 2014 season -- videos of which the coaches played throughout the Leo Seal Jr. Football Complex this week -- there was little precedent to what unfolded at Tiger Stadium Saturday.

In previous stops at Texas Tech and Washington State, Leach-coached teams had been outscored 68-49 in conference openers against Texas A&M (then members of the Big 12) and Colorado. Saturday, MSU outgained LSU 303 to 146 in the first half and 632 to 425 overall.

This isn't to say Saturday's performance was perfect. There were reminders of days filled with close calls and near-upsets. Costello fumbled twice and tossed two nearly debilitating interceptions as LSU came back from a 10-point deficit early in the fourth quarter to tie the contest with 9:37 remaining.

But unlike those harrowing memories, MSU went for the jugular and found the kill shot. Costello capped off his historic day with a 34-yard touchdown pass -- his fifth of the day -- to Osirus Mitchell on third-and-nine with under four minutes left to push the Bulldogs' final margin to 10.

"It's a vertical," Costello said of the route he threw. "Everyone in the country runs verticals, but when you've just thrown three or four or six passes in a row leading up to that play, that defensive back ran around the field quite a bit. He's not playing the same way he was on that first play. We were willing to attack him."

Stepping toward the menacing Bayou Bengal eye on the 50-yard line at Tiger Stadium where a year ago Burrow announced himself to the nation, Costello spread his arms and peered toward his quirky coach as if to say "Look at us."

"I'm speechless about everything that happened today," he said. "I mean, if you told me a year ago today I'd be sitting here, it's just crazy. A year ago I couldn't even throw the football. I was battling back."

Saturday was supposed to be a coronation of the Tigers as 2019 national champions. Instead, it was Costello who walked into the Louisiana night with the crown.