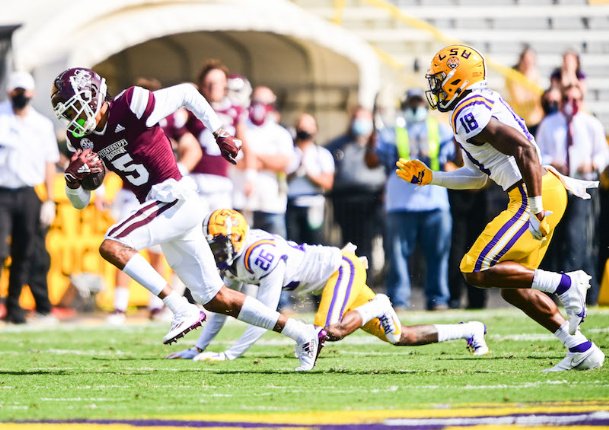 Leading Mississippi State in receiving Saturday was wideout Osirus Mitchell with 183 yards and two touchdowns, who might as well have given the Bulldogsâ famous summer workout âLeach Beachâ a five-star review in his postgame session. Photo by: Chris Parent/LSU Athletics

BATON ROUGE, La. -- Saturday was supposed to be LSU's day.

It was supposed to be a celebration of a historic college football season in 2019 and the start of the Tigers' national title defense.

Instead, the day belonged to quarterback K.J. Costello, Mike Leach, and the rest of the Mississippi State Bulldogs.

Hours before the Bulldogs stunned No. 6 LSU with a 44-34 upset, the scene outside Tiger Stadium in Baton Rouge was eerie.

Because of safety protocols caused by the ongoing pandemic, fans weren't allowed to tailgate, something that would seem unfathomable to Tiger fans 12 months ago. Baton Rouge security was hellbent on keeping the streets surrounding Tiger Stadium confined to fans with tickets only, unbeknownst to a jogger who blissfully ran past the cage of LSU's live mascot, Mike the Tiger. He had no idea there was even a football game scheduled, but the four security guards chasing him made darn sure to let him know.

In what equated to around 20 percent capacity, 21,124 fans saw LSU raise its 2019 championship banner, which let a small but vocal crowd showcase its presence in pregame ceremonies.

Those fans left unhappy as they watched Costello shred a LSU defense that was without standout defensive back Derek Stingley Jr. for 623 yards and five touchdowns en route to LSU's first defeat since 2018. Because who needs game reps to iron out kinks in a completely new system, right? In his first game with MSU since transferring from Stanford, Costello broke a single-game record for the most passing yards in a Southeastern Conference game, flying by Georgia's Eric Zeier (544 yards). He also surpassed the Mississippi State single-game passing record, which was held by some dude named Dak Prescott in 2015 (508 yards). It's pretty incredible to say, but Costello could have been much better, considering he committed three turnovers, including throwing a pick-six for the first LSU score of the day. Most MSU fans are going to forget about that in victory, though.

"I'm speechless about everything that happened today," Costello told reporters via a Zoom press conference.

So is the college football world, K.J.

If someone blindly looked at the box score and only saw that MSU ran for nine yards on 16 attempts, you'd think the Bulldogs lost 72-0. But these aren't your father's Bulldogs.

I'm not sure what the restaurant capacity in Starkville is limited to these days, but clearly one will offer the new charismatic, fan-favorite coach all the crawfish he can eat this week after delivering a top-10 upset in his debut.

Equally as impressive offensively was three Bulldog players finishing with at least 100 receiving yards, only the second time in program history such an occurrence has happened. Leading the team was wideout Osirus Mitchell with 183 yards and two touchdowns, who might as well have given the Bulldogs' famous summer workout "Leach Beach" a five-star review in his postgame session. The senior wideout said LSU defensive backs told MSU players they were tired late in the contest, which led to mockery from Bulldog players. After all, Costello only said his teammates were part of the best-conditioned team he's ever been on a few days ago.

Lost in Costello's heroics was the debut of defensive coordinator Zach Arnett's 3-3-5 defense, maligned by pundits for its youthful secondary in the preseason, that was picked up by a front seven that racked up seven sacks and forced two turnovers.

The win was therapeutic for those who played in it, but I can only imagine it caused as much jubilation to Bulldog fans who watched it.

If you asked most knowledgeable people in college football circles in early August, most doubted college football would even be played in 2020. This year has sucked, to put it mildly, for so many people in the Mississippi area, which had been hit hard with COVID-19 cases throughout the summer. Loved ones have been lost. Hospitalizations were far too many. So any MSU fan that wants to spend the rest of the day celebrating like the Bulldogs just won the national championship gets a pass from me.

And well, it is only one game, so this could just be a prisoner of the moment-type take, but perhaps Mississippi State's season outlook changes with this victory. The most optimistic prognosticator had MSU falling in Baton Rouge to open the season. Is 6-4 possible? Or 7-3? Who knows, but this is your day to dream, Bulldog fans.

When was the last time a home opener was as highly anticipated as next week's kickoff at Davis Wade Stadium against Arkansas will be? We'll wait to see if this is a turning point in Mississippi State's football program or just an isolated incident of Leach catching a team napping, as he did so many times in his tenure at Texas Tech and Washington State.

But this is your day to dream, Bulldog fans, so I won't stop you.

1. 'When World War II ended, it wasn't as big a headline as we had today': Revisiting Mississippi State's 1980 upset of No. 1 Alabama COLLEGE SPORTS