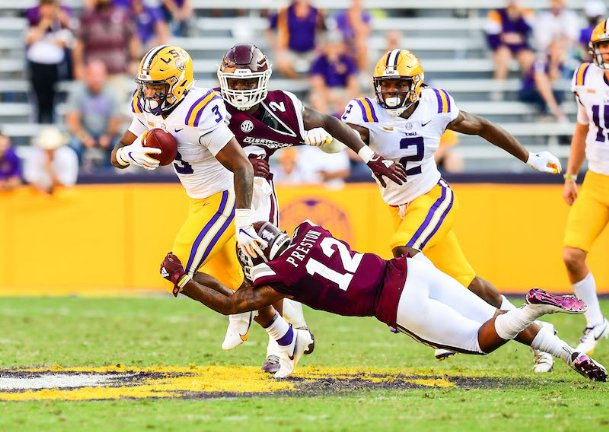 Thirty-four points Saturday night aside, MSU held an offense that, albeit boasted ample new faces, were world-beaters a season ago at bay. Photo by: Gus Stark/LSU Athletics

Starting quarterback K.J. Costello threw for more yards -- 623 -- than any player in MSU or Southeastern Conference history. His 60 attempts were also a school record. Seniors Kylin Hill, JaVonta Payton and Osirus Mitchell all corralled over 100 yards receiving, despite only two players in the past three years having eclipsed that mark.

But for all the offensive fireworks that were scattered across the stat sheet Saturday evening, it was the MSU defense that proved the most pleasant surprise for Bulldog staffers and maroon and white-clad onlookers.

With Joe Burrow guiding a century-defining offense a season ago, LSU passed for over 6,000 yards and scored 48.4 points per game. As impressive, the Tigers converted on a tick under 50 percent of third down conversions. What a difference a year makes.

In Saturday's anemic display from Burrow replacement Myles Brennan, LSU finished 5 of 17 on third downs, though not entirely out of their own doing. Arnett, who led the nation's No. 5-ranked defense at San Diego State, brough persistent pressure from the edge in the form of Copiah-Lincoln Community College imports Tyrus Wheat and Jordan Davis.

It was Wheat who first made Brennan uncomfortable, smoking the Mississippi native on a third-and-4 at the MSU 48. Leaping from the pile he offered a swaggy flex that the ever-confident Burrow might've sported had his eligibility not been exhausted last fall.

Following Wheat's captivating crunching hit, Davis forced a rushed pass from Brennan as the Tigers drove toward MSU territory in Saturday's back and forth affair. Finally connecting with Brennan's right arm in the third quarter, he forced a throw toward a wide-open Racey McMath to come up short -- falling into the hands of sophomore cornerback Esaias Furdge.

"Our defensive line does a good job of that," Leach said of his defense's persistent pursuit of the quarterback. "Mississippi State has had good defensive linemen over time, and then when Zach does that pressure stuff and Mississippi State broke in a huge portion of that with Joe Lee Dunn. Sometimes old ways are best."

MSU's pressure Saturday was endless. Arnett brought linebackers. He brought safeties. He brought everyone. The Bulldogs concluded the contest with seven sacks -- four of which came in the fourth quarter.

Saturday's game was back and forth in nature, the kind of game past MSU teams have wilted in under pressure. A season ago, the Bulldogs held tough as the Burrow-led Tigers mustered just 413 yards of offense compared to their normal 568-yard output and still fell by 17 points.

There are returners, sure. Senior linebacker Erroll Thompson and senior defensive end Marquiss Spencer have played as many SEC snaps as anyone on the roster. But on a two-deep that boasted 12 underclassmen, this year looked like it'd be a defensive rebuild.

Arnett has been blunt since he arrived at MSU. He's no-nonsense yet frank in his approach. In media sessions throughout camp, he conceded the defense wasn't where it needed to be. Thirty-four points Saturday night aside, MSU held an offense that, albeit boasted ample new faces, were world-beaters a season ago at bay. The Bulldogs may not be where Arnett wants them, but if they reach that potential, Leach's squad gets a whole lot scarier.

"I love to lead, but I follow those guys that have been here the longest," sophomore linebacker Aaron Brule said postgame. "Everybody is just coaching us up real well and guys are not playing scared or anything like that. Everybody feels like they belong right here."