Analysis: Seven things we learned from Mississippi State's upset win over No. 6 LSU 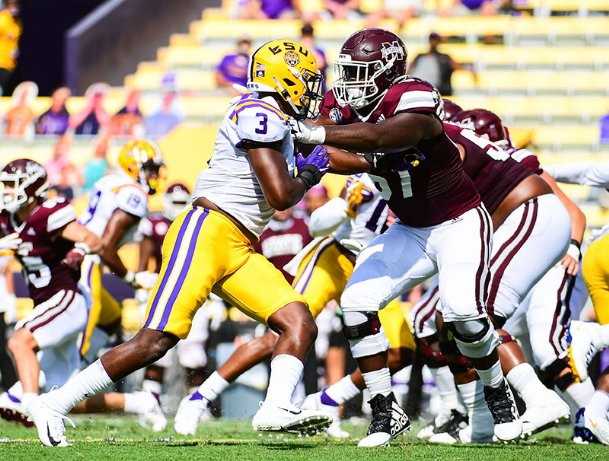 To think of typing that sentence eight months ago, let alone eight days ago, you might've called me insane and shipped me back to Indiana. Well folks, it's reality.

The Bulldogs outclassed a Tiger team that endured a massive amount of roster turnover and coaching changes in the offseason, but the sentiment remains: Leach returned to the SEC in the most Leach way possible, by kicking down the damn door.

With that, here's seven things we learned from MSU and their charismatic first year head coach in Saturday's win:

Leach's offense is lauded for its passing game. It's part of the reason he led the nation in passing offense five times during his eight-year tenure at Washington State. Well that appears it'll transition to the SEC quite nicely.

On a day MSU finished with 632 yards, 623 of those yards came in the passing game. This is a new-look offense that is as foreign to Starkville as Leach's pacific northwest and west coast background, but it's sure worked well through one week.

Down a reigning All-American cornerback in Derrick Stingley Jr. Saturday, LSU's defensive backs were beaten time after time by any number of MSU receivers, while quarterback K.J. Costello had a debut for the ages (I'll get to that in a minute).

Leach has unapologetically stuck to his offense for nearly three decades and the air raid has its detractors, but Saturday it looked downright scary for any team facing the maroon and white this fall.

K.J. Costello is for real

Finishing an 36-of-60 for 623 yards and five touchdowns, Costello dazzled onlookers in what he'll bring to Leach's offense this fall. There has been ample quarterback stardom in the air raid before, sure. Gardner Minshew II's mustached run to an 11-win season at Washington State in 2018 was the most recent example.

But Costello is different. He spent four years mastering an innately detailed Stanford offense. The air raid, by contrast, is based on about 25 plays.

Costello is likely a fringe first round pick, early second round NFL Draft prospect at this point, but that's still among the most talented signal callers Leach has had in his system.

The air raid is based on timing and repetition. If Costello was firing on all cylinders Saturday without spring practices or much of a true offseason, this team is only going to get more dangerous offensively.

Kylin Hill's carries may be down, but he's just as dangerous in the air raid

Outside of Costello, Saturday was a coming out party for a few of MSU's biggest offensive weapons. Chief among those breakout stars was Columbus native Kylin Hill.

Hill finished last season as the SEC's leading rusher with 1,350 yards on 242 carries. That was going to change in 2020, but to what degree he'd be involved in the offense remained to be seen. Then Saturday happened.

The former Columbus High School standout finished the night with seven rushes for 34 yards while totaling 158 yards receiving on eight catches -- including his 75-yard touchdown catch from Costello at the tail end of the third quarter that put MSU up by 10.

Hill's carries are going to see a downtick, that much is certain. But if Saturday was a preview of games to come, he's going to have plenty of chances to get involved and thrive.

On the subject of running backs, freshman Jo'quavious Marks concluded his inaugural in the maroon and white with three rushes for 15 yards and one catch for negative two yards on three targets.

Marks' role may be limited this season, if only because Hill is in front of him on the depth chart, but the 11 yard run he ripped off on third-and-three gave a glimpse as to why he was the the highest-rated recruit (No. 16 running back, No. 138 nationally) in MSU's 2020 class.

Only two running backs at Washington State had more than 16 rushes last season and it appears Marks could be in line for the complimentary role alongside Hill.

There wasn't a bigger question mark this season than the MSU defense. It lost seven starters from a season ago and the pre-game depth chart had 12 underclassmen on the two-deep.

Despite that, the Bulldog defense flew around the field and brought constant pressure on LSU quarterback Myles Brennan. MSU's seven sacks were the most in a game since the 2015 Egg Bowl. It also limited a Tiger offense that averaged just over 568 yards per game last year to just 425 yards total and 146 yards in the first half.

Of note, four of MSU's top five tacklers on Saturday started a combined one game a season ago.

One contest didn't cure all ills and there were still a handful of coverage breakdowns in the secondary that LSU exploited down the stretch, but defensive coordinator Zach Arnett's unit showed up to play and held a previously prolific Tiger offense at bay.

Lauded for his ability to make highlight-reel catches by Costello, his final catch with just over three minutes remaining on a straight vertical route from 24 yards out, gave MSU the cushion it needed in the waning minutes.

Minutes before that, Shavers corralled his second catch of the day -- a 37 yard gain on second down to move MSU deep into LSU territory after the Tigers evened the game at 44 with just under 10 minutes remaining. Racing into the open field, the former Alabama transfer's catch set up a Brandon Ruiz field goal that put MSU ahead for good.

In short, Mitchell was the star of the day, but he and Shavers' massive frames at 6-foot-5 and 6-foot-6, respectively, are going to be problems for most defenses and they kept the Tigers on their heels for much of Saturday's contest.

As praise was heaped on Leach and his staff for Saturday's win, pollsters around the country offered their own congratulations of sorts.

MSU came in at No. 14 in the Amway Coaches Poll early in the day, while the Associated Press marked MSU at No. 16. This marked the first time since the second-to-last poll of the 2018 season that the Bulldogs were ranked in both the Coaches and AP polls.

The win over then-No. 6 LSU was also the highest-ranked road win in school history.