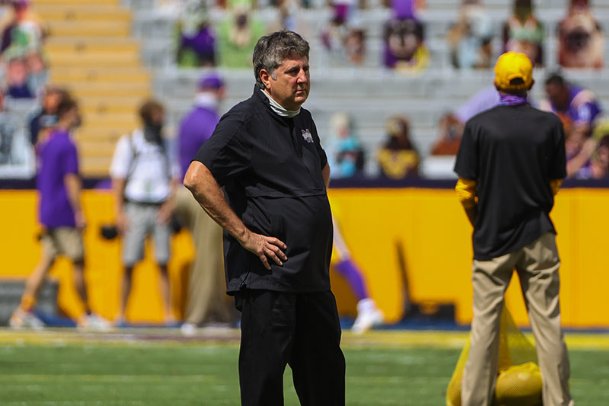 STARKVILLE -- Mike Leach hasn't had to preach on complacency much since returning from Baton Rouge.

Following a startling upset of then-No. 6 LSU Saturday, Leach said Monday his team arrived back in Starkville motivated and eager to attack the practice field and weight room ahead of their Week Two contest against Arkansas.

In 18 years as a head coach split between Texas Tech, Washington State and, now, Mississippi State, Leach has six wins over top-10 teams including his most recent over the Tigers. But perhaps as impressive is his record the week after an upset.

Of the five previous games, one was a bowl game and thus ended the season. That said, in Leach's four top-10 regular season victories, his teams were 3-1 against their following opponent, outscoring the opposition the 135-118 -- a stat that proves more impressive not including Texas Tech's 60-15 loss to No. 4 Oklahoma in 2002 one week after beating No. 4 Texas.

"The biggest thing is constant emphasis and it starts in the weight room on Sunday," Leach said Monday. "Everybody, the other teams have talked about the 24-hour rule. Let it go after 24 hours and then we officially try to seal it up after our Sunday practice and then constantly reinforce it."

Further, Leach was quick to note his squad wasn't perfect in Saturday's win. Starting quarterback K.J. Costello, for one, was named the Southeastern Conference Offensive Player of the Week Monday, given his 623 passing yards and five touchdowns -- the former of which broke the MSU and SEC single-game marks.

Despite the prolific performance, Costello also turned the ball over four times, aiding in a late LSU comeback attempt that culminated with the Tigers' tying the score at 34 with 9:37 remaining in the fourth quarter.

"I feel like we have a long way to go," Leach said. "I think there's a lot of work we can do. I mean, and what's fulfilling about it is, like I said, we played hard, we had a winning effort, but I see a lot of things we can do better and so do our coaches and our players do too."

Beyond the actual on-field intricacies of this coming week's contest against an Arkansas team that fell 37-10 to No. 4 Georgia, Saturday will be another new experience for Leach as he coaches his first game at Davis Wade Stadium, albeit with limited fan attendance. With a capacity at roughly 60,000, it's expected about 12,000 fans will be allowed in the stands, while the MSU athletic department is allowing fans to purchase cutouts of themselves to be placed in the seats.

Leach compared the cardboard fans at Tiger Stadium last week to an episode of The Twilight Zone.

"If it's cool and people enjoy it, great," Leach said. "But that is a little surreal, the fake people in the stands."

Monday's press conference also briefly turned contentious when Leach, who spent much of Saturday's upset win over LSU either without a face covering or with his neck gaiter not covering his face and hanging around his neck, was asked whether his lack of mask-wearing was a statement on anything particular or a product of happenstance.

"Well, I tried to remember the best I could then I found myself talking all of the time, because I'm calling the plays as well," Leach said in response to a question from New York Times reporter Alan Blinder. "I was in a constant state of talking. So between me taking it down to talk me lifting it up and it falling down on its own and me remembering to put it back up, I think there were a number of challenges there. But, you know, with a little practice, who knows, it may be better this week."

Following his initial answer, Leach went back and forth with Blinder over the query.

"See I've got this face sock thing, which is bad," Leach said in reference to his neck gaiter. "It sits right on your neck instead of hangs from your ear...Do you ever find that, you know, and then pretty soon, you know, those things will start to smell bad. And then all of a sudden you're going 'What's that smell? What's going on out there?' There's nothing going on out there. That's your breath. I need to practice with it. But what do you do when you're talking? Did you have a trigger something to remind you when to pull that thing back up? Because I found myself too preoccupied to do it and then all of a sudden, I noticed it's around my neck there."

"Yeah I mean I think everyone is different," Blinder responded. "I was just curious what your thinking was. If it was some kind of statement, if it was..."