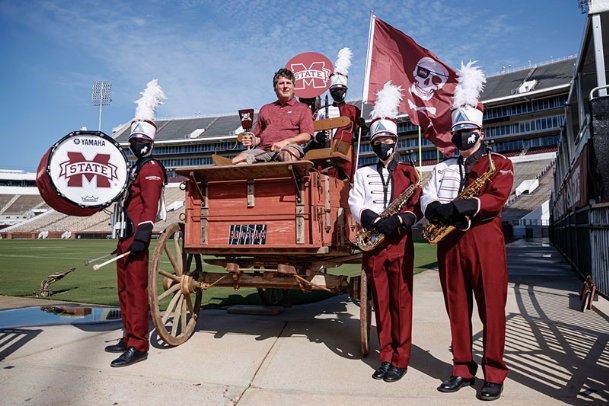 In an effort to recruit idle Big Ten and Pac 12 fans to their side, MSU marketing created a video of Mike Leach riding a bandwagon. The video was posted at an opportune time on Monday following the Bulldogsâ upset victory over LSU last Saturday. Photo by: Photo courtesy of MSU athletics

This isn't the beginning of another corny joke from your parents. Rather, it's an idea that started as a joke in a text chain between MSU Senior Legal Administrator and Director of Licensing Duski Hale, Associate Athletic Director of Creative Strategy Daniel Watkins and Deputy Athletic Director of External Affairs Leah Beasley that has since morphed into the latest viral sensation featuring MSU's affable head football coach.

"That was fairly athletic if I do say so myself, getting on top of that wagon," Leach said at his Monday press conference just hours after the video dropped on social media. "They're pretty creative here and did a good job putting it together."

Following a string of texts in which Hale, Beasley and Watkins quipped about bringing Big Ten and Pac-12 fans temporarily into the MSU fanbase on the heels of the conferences' since-reversed cancellations of their respective seasons amid the COVID-19 pandemic, Hale had a scheduled meeting with Leach to sign apparel in his office. Broaching the idea of bringing his former fans at Washington State fans into the MSU support bubble, Leach told Hale he was all in -- and ensured one other group was included.

"Hey don't forget about my Texas Tech fans," Leach said at the time. "They're so down for that."

With Leach on board, Hale said a woman her office was able to secure a wagon from a family in Starkville through a friend who'd used it as a wedding prop. It was hooked to a trailer hitch and brought to Davis Wade Stadium for the video shoot.

Upon arrival, Hale, Director of Football Creative Media Mitchell Bernardo and Assistant Athletic Director of Creative Video Drew Walker, who helped shoot the video, were greeted by the sprinkler system on Scott Field. Asking one of the attendants overseeing the turf if they could be turned off momentarily, Hale said through a laugh that they looked at her like she was nuts.

Instead, the group finagled the wagon to avoid the water, timing their movements with the rotation of the sprinklers as if they were crossing a minefield.

"There's no one else around, so I'm pushing this wagon around back and forth on the football field, dodging sprinklers, timing the sprinklers," Hale explained.

Local clothier George Sherman, who has a licensing deal with the school, according to Hale, planned an outfit of grey tapered slacks, a pair of maroon tennis shoes and an MSU-emblazoned polo he and Hale hoped would elicit a West Coast vibe for the effervescent head coach's appearance on the wagon.

Instead, Leach arrived at the shoot moments after the sprinklers finally abated, donning the polo he was given, his ever-present Old Navy cargo shorts and a pair of flip-flops.

"It's perfect for him," Hale said. "I mean who's going to be mad? He is who he is and that's what's so endearing about him ... He's unapologetically Coach Leach."

While the video was shot in the weeks prior to the 2020 season, Saturday's road win over LSU afforded the perfect time to debut the 50-second video. Watkins, who oversees the bulk of MSU's graphic designers, videographers and photographers, built a landing page that was incorporated into the social media posts with a link conveniently titled hailst.at/Bandwagon.

Once the link is clicked, web surfers are directed to a slew of comical questions like "Which is better Las Vegas or StarkVegas?" and "Do you know ALL the words to Journey's 'Don't Stop Believin''?" Those that completed the seven-question survey were then sent a free block MSU logo decal. Watkins said the initial idea was to send out 500 decals. As of Wednesday afternoon, there were 1,781 submissions.

"Like you would've hoped, people have really gravitated toward it," Watkins told The Dispatch. "And I think one of the good things for us is Mike already kind of has a brand. Our goal is just kind of to play off of that a little bit and, that's kind of what we did."

"It's pretty magical whenever it actually does work," Beasley added. "Because sometimes it just flat out fails. But this is definitely not one of those times."

Since Leach's arrival in Starkville, the MSU marketing department has spent countless hours scheming new and improved content ideas for the head coach. Among them, pirate-themed MSU gear -- an ode to Leach's self-authored book "Swing Your Sword" and his affinity for swashbuckler lore -- has graced billboards, T-shirts, polos and more in his nine months on the job. Hale said it took just 38 minutes after Leach's contract was made official in January before she saw a Walking Bully logo donning an eye patch.

As for the bandwagon, it's still taking on supporters.