With the air raid screeching to a halt, Mike Leach looking to resuscitate struggling MSU offense 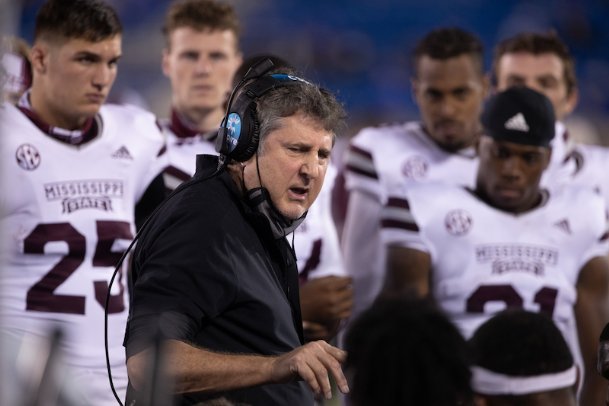 Mike Leach will get back to work this week trying to fix a struggling offense when MSU faces Texas A&M on Saturday. Photo by: Mark Cornelison/Pool Photo

For the better part of two weeks, Mississippi State's offense has seen nothing but drop eight zone coverage as it struggled to anemic offensive outputs in losses to Arkansas and Kentucky. And while Leach isn't panicking quite yet, there figures to be some shake-up ahead of No. 11 Texas A&M's visit to Starkville on Saturday.

"We're going to be competitive at every position," he said during his Monday press conference. "There may be some lineup changes, we'll see, and then we also may play more guys. But if they bring three (pass rushers), we have to consistently win those battles, and I don't think we've been consistent at it."

MSU figures to see a change or, at the very least, a short leash under center. After dazzling the nation with his 623-yard, five-touchdown effort against then-No. 6 LSU in Week 1, K.J. Costello has turned into a shell of himself. In the two games since, Costello has completed 69.3 percent of his throws, but seven interceptions and a 6.9 yards per completion rate have bogged down a seemingly high-flying aerial attack.

Since Costello's boisterous introduction to Southeastern Conference defenses, Leach has referenced the quarterback's eye placement as a point of contention in recent losses. The coach explained Monday that it's a trait he needs to teach better, but it also falls on Costello to execute.

Beyond where Costello is looking, he's also spent the bulk of the past two games forcing balls into tight windows. Why? The process is twofold.

First, MSU's offense has lacked the rhythm it needs to tire out defenses and get ahead of the chains. Instead, the Bulldogs are finding themselves in third-and-long situations that force Costello to try and make plays down field that aren't necessarily there.

For example, seven of MSU's 17 third-down attempts against Kentucky were from nine or more yards out. Of those, the Bulldogs converted just one, while three of the Bulldogs' six interceptions on the night came on third down.

Secondly, Costello has gotten away from the air raid's cardinal rule: Never pass up an open man.

In losses to Kentucky and Arkansas, Costello has been afforded short throws as teams continue dropping eight men into coverage. But rather than take the minimal gains checkdowns offer at most every juncture, he's forced balls downfield when the looks aren't there.

"It goes back to our saying, 'You have a great capacity for boredom,'" air raid architect and Leach's mentor Hal Mumme told The Dispatch in September as to how quarterbacks have to look at the offense.

While Costello has shouldered the brunt of the blame for a middling offense the past two games, MSU's run game also hasn't allowed him much reprieve. Through three contests, the Bulldogs rank second to last in all of college football with an average of just 2.15 yards per rush attempt. By contrast, Washington State running backs averaged 4.21 yards per attempt a season ago under much of the current MSU staff.

Monday, Leach explained the struggles in the run game are rooted in two simple facts: slow starts off the ball and poor vision in the backfield. For much of Saturday's loss to Kentucky, the MSU offensive line struggled to handle a three-man rush, while the ground game was limited to just 20 yards on 14 carries in an effort Leach criticized for ill-timed cuts and not attacking holes when necessary.

Postgame Saturday, the first year head coach received flack for his comments regarding "malcontents" on the MSU roster and that there hasn't been a complete buy-in from the Bulldogs. Never one to mince words, Leach doubled down on those sentiments Monday.

"I think we do have a few fence-riders that are trying to decide whether they're going to commit or not going to commit (to) what everybody is doing here," Leach said. "And anytime there's a transition there's a certain number of guys, and I've been through a number of these transitions, who are going to do the wait and see thing -- 'Well, I'll see if I like what I see.' Well, it's too bad. I mean, the train rolls on. They need to jump on board pretty quick, or the train is going to roll on without them."

Through three weeks, the prolific MSU offense that debuted in Baton Rouge has come to a screeching halt in Lexington. For Leach, Costello and the rest of the Bulldog offense, this week is a chance to apply whatever grease is needed to get the axles of a broken unit spinning efficiently once more.