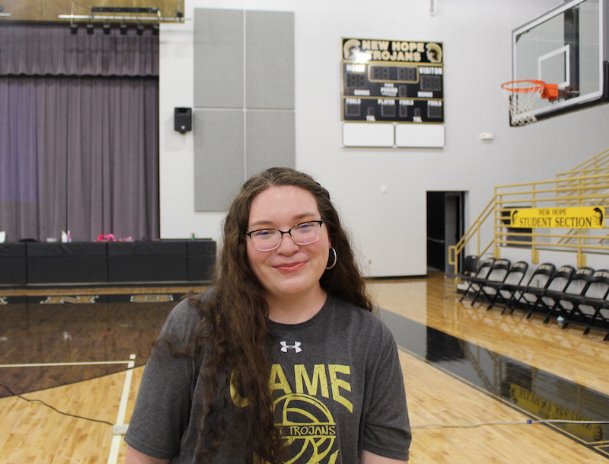 New Hope senior Emma Alexander joined the volleyball team as a manager junior year when her close friend Micaela Hudgins encouraged her to ask about the position. Since then, Alexander has formed a close bond with the Trojans. Photo by: Theo DeRosa/Dispatch Staff

NEW HOPE -- Allison Woolbright didn't even know the girl who walked through her door.

At the beginning of the 2019-20 school year, the New Hope volleyball coach lamented that she had to find a new student manager after the graduation of Katie Deason, who had held the position for the Trojans for a couple years.

"I thought, 'Oh, we will never find anybody who will replace her because she was just really good,'" Woolbright said.

She didn't know what to expect when she heard from assistant coach Becky Hudgins that a friend of Hudgins' daughter Micaela, a junior middle blocker, wanted to take over as New Hope's manager.

So when Emma Alexander walked into Woolbright's history classroom and asked if she could manage the team, the coach had just one question in response: "Can you travel with us?"

Alexander said yes. She was in.

There were hurdles. Alexander didn't know a thing about volleyball when she signed on with the Trojans, but she learned fast. She wasn't close to anyone on the team except Micaela Hudgins, her best friend, but she was soon accepted.

And a little more than a year after she strolled into Woolbright's classroom, Alexander has truly become an integral part of a standout New Hope team -- and someone the Trojans will miss once their excellent season comes to an end.

"I don't want her to go," Woolbright said. "I know I have to let her, but we're really going to miss her."

Alexander was 14 when her family moved back to the area from Meridian, and the transition wasn't easy. After years spent in the Northeast Lauderdale school system, she suddenly had to fit into a new school where everyone knew each other and friend groups had already been established.

But her parents had gone to college at Mississippi University for Women with Hudgins' parents, and the two families tried to get their daughters acquainted. Initially, it didn't go too well.

"I was very loud and kind of extra, and she was very shy and reserved," Hudgins recalled. "We didn't really get along."

Then, in sophomore year, Alexander and Hudgins both enrolled in the same class at New Hope: child development. Neither girl knew anyone else in the class, so they sat together. Eventually, something clicked.

"It kind of all fell into place," Alexander said.

At one point during the class, they posed for a picture where they displayed smiles on their faces and large, fake baby bumps under their clothes -- part of their coursework.

"Pregnant together, we stick together," Hudgins said.

That, they have. When Hudgins' junior volleyball season started, she invited Alexander to come aboard as manager, aware of Alexander's level head and capacity for organization. Alexander accepted the challenge. She pored over worksheets to learn the sport, gleaned the rules from the first game she watched and asked questions in practice when she didn't understand something.

Still, it wasn't easy to go through the re-introduction process. Alexander was nervous when she accepted the manager position; she didn't know anyone else on the team, and integrating herself into the group felt akin to her move from Meridian.

But she knew Hudgins, and that was enough.

"It was a little better because I had Micaela, and I knew that even if none of the other girls liked me, Micaela was going to like me," Alexander said.

But despite Alexander's shyness and her foray outside her comfort zone, she "hit it off" with the Trojans right away, Woolbright said. Woolbright's daughter Kensley, a sophomore libero, kidded Hudgins, saying she was going to take Hudgins' best friend away. The rest of the Trojans felt a similar connection.

"They just welcomed her openly," the coach said. "It was like they had always been friends."

'The piece that connects us together'

As Alexander's familiarity with the team has grown, so has her role. Now, Woolbright said, she acts as the Trojans' "assistant assistant coach" -- able to fill in and even run junior varsity practices when Woolbright and coach Hudgins have to step out.

Alexander helps with the team's responsibilities at road games and tournaments, making sure every Trojan is accounted for on the team bus. She helps with drills, shagging and setting balls for New Hope players; she keeps score during matches and makes sure the Trojans' rotations are in order.

"She's just really like the eyes that watch while everything else is going on to make sure everything is straight," Micaela Hudgins said.

That can also include being emotional support for New Hope after a big game -- win or lose.

"If we're all sad after a loss, she'll pick us all up, tell a big joke and make us laugh," Hudgins said. "When we're happy together, she just kind of makes us all feel like a great big team and a big family. She's really the piece that connects us together."

Such a vital role means Alexander, too, is subject to the emotional extremes of each season. Incredible highs abound, like a five-set win over Lake Cormorant in the first round of last year's playoffs where Trojans fans jumped down from the rails of the bleachers to celebrate with the team. So do crushing lows: Alexander won't soon forget New Hope's loss to Long Beach in the MHSAA Class 5A semifinals.

"We had to have a very sad conversation in the parking lot after that," she said.

This year, the emotions might be even deeper. New Hope, set to play defending state champion Center Hill in the second round of the playoffs Saturday evening, has followed up the best season in school history with a year that could be even better. But as it's Alexander's senior year, one loss could mean the end of her career as the Trojans' manager.

"It's very emotional because I love them a lot and I don't want to leave them," she said, choking up.

But even when New Hope's season inevitably ends, Alexander won't really be gone.

She'll go on to manage for the Trojans' soccer team, where Woolbright's daughters play. In the spring, she'll help out with the Level Elite club team of which Hudgins and other Trojans are a part.

And she plans to attend MUW, where she might even get to be alongside Hudgins again if the Trojans' star decides to play for the Owls. Regardless, Alexander plans to ask coach Brooke Carter the same question she once asked Woolbright: Can I manage the volleyball team?