'A war of culture': A history of Mike Leach's longstanding success over Texas A&M 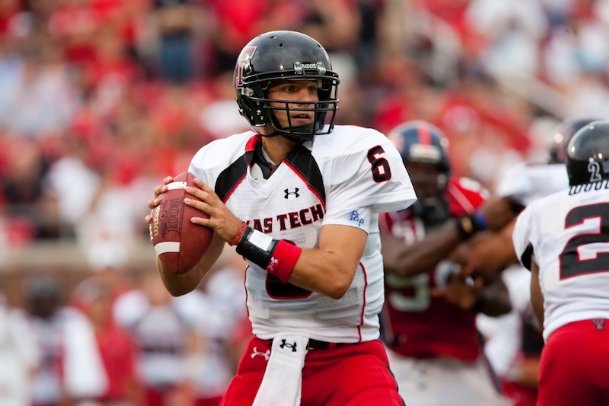 In three seasons as the full-time starter under Mike Leach at Texas Tech, quarterback Graham Harrell finished his career 28-11, guiding Texas Tech to just its third ever 11-win season in 2008 and a perfect 4-0 record against Texas A&M. Photo by: Courtesy of Texas Tech Athletics

STARKVILLE -- Mike Leach is no stranger to Texas A&M.

In Leach's 10 years as the head coach at Texas Tech, the Aggies accounted for one half of the Red Raiders' bitter in-state rivals alongside Texas. With Tech playing little brother for the bulk of his decade in Lubbock, there was always added juice when Leach's squads made the trek from West Texas to College Station or welcomed the corps of cadets to Jones AT&T Stadium.

"Great, exciting matchups," Leach said Monday of what he remembered about past contests against Texas A&M. "Our stadium, of course, was loaded and fired up."

Saturday, he will face off with Texas A&M once more. Having traded his black and red for maroon and white, Leach and Mississippi State head into the contest off a pair of anemic offensive displays against Arkansas and Kentucky. A chance to right previously egregious offensive transgressions, the contest is also an opportunity for Leach to improve on his 7-3 career ledger against the Aggies.

"Back then in the Big 12, Texas Tech, we kind of hated Texas and A&M," former Texas Tech receiver and longtime Leach assistant Dave Nichol said Wednesday.

"I've had a bunch of texts this week from some old Red Raiders that are pretty fired up," he continued.

For days, students lined the pavement in Lubbock in hopes of securing their spots in the student section for the Texas A&M game.

The tradition of camping outside Jones AT&T Stadium started as a one or two-night endeavor, but by the latter stages of Leach's final tenure at Texas Tech it evolved into a week-long affair. Undergrads arrived in droves. Leach quipped he saw everything from televisions to pool tables to water beds amid the parking lot outside the stadium.

Students rotated in and out due to class responsibilities, though one person was always tasked with staying and maintaining a group's spot in line. A mayor was even elected, though it was done with about as much organization as can be asked from a group of late teens and early 20-somethings.

"Sometimes there were two mayors if it got confused who was actually the first mayor," Leach joked.

Current USC offensive coordinator and former Texas Tech quarterback Graham Harrell need not be reminded of his longstanding antipathy for the Aggies.

Harrell was born and bred in the Longhorn State. He played for his father, Sam, at Ennis High School, setting Texas career records of 12,532 yards and 167 touchdowns and earning Gatorade Player of the Year honors in the state.

Rated a four-star quarterback in the class of 2004, Harrell was among the top 150 recruits in the country. Despite his prowess as a prep passer, the Texas A&M coaching staff sided with fellow in-state signal caller Stephen McGee and their interest in Harrell during the early stages of the recruiting process subsided.

"Culturally, they were just so much different than (Texas Tech)," Harrell told The Dispatch. "And I knew that from before I was ever recruited by anyone. It wasn't my fit; that's probably the best way to describe it. I was never an A&M fan."

Warming up near midfield at Kyle Field during a trip to College Station, wide receiver Eric Morris, now the head coach at Incarnate Word in San Antonio, looked on as an errant pass from Harrell hit an Aggie cadet meandering toward the back of the end zone.

"Not done intentionally, but someone dropped a ball, a receiver, threw it just a little bit too high, and they're doing their little thing around there, and it just happened to hit one of them," Morris conceded. "That's always something that sticks out in my head."

In three seasons as the full-time starter, Harrell finished his career 28-11, guiding Texas Tech to just its third ever 11-win season in 2008 and a perfect 4-0 record against Texas A&M. Outscoring the Aggies 165-76 over his four years in Lubbock, Harrell averaged a tick over 422 yards, 3.3 touchdowns and a completion percentage of 76.8 in his three starts against Texas A&M.

Entering the 2006 season, expectations in Lubbock had skyrocketed.

In Leach's first six years at Texas Tech, the Red Raiders ripped off at least seven wins in every season. Nine-win seasons in 2002 and 2005 had also raised the bar.

Backing up incumbent starter Cody Hodges during his freshman campaign, Harrell assumed the full-time role as a sophomore in 2006. The Red Raiders jumped out to a 3-1 start, with a loss to TCU sandwiched between wins over UTEP and Southeastern Louisiana.

Heading to the playing surface at famed Kyle Field, the Aggie War Hymn and the storied yells of the Texas A&M faithful rained down on Harrell and his Texas Tech teammates. Despite the boisterous crowd, he and the Red Raider offense rolled through the first half of play at Kyle Field. Harrell accounted for 258 yards and three scores on 19-of-26 passing, including a touchdown pass to Robert Johnson with five seconds remaining in the second quarter, to lead Texas Tech to a 24-14 halftime lead.

Stalling coming out of the half, the Aggies responded. A trio of Layne Neumann field goals and a 4-yard Chris Alexander touchdown run pulled Texas A&M ahead by three with just 2:12 remaining.

"We fell asleep at the wheel, I guess," Harrell recounted.

Taking over at his own 20-yard line after the ensuing Texas A&M kickoff, Harrell promptly marched the Texas Tech offense downfield. A 6-yard pass to running back Shannon Woods started the drive. An 8-yard completion to Jarrett Hicks gave the Red Raiders a first down and some momentum as the clock ticked toward zero.

Completing a 10-yard pass to Hicks on fourth-and-4 around midfield, Harrell connected with Joel Filani to move into Aggie territory with just 41 seconds remaining.

In the 14 years since Texas Tech and Texas A&M's 2006 meeting, Harrell's late touchdown pass to Michael Crabtree that sprung an upset of then-No. 1 Texas two seasons later has been burned into the college football lexicon. But a grainy YouTube clip offers video evidence Harrell's final connection that fall afternoon in College Station was equally as impressive.

With trips to his left, he received the snap. Harrell first looked to the left, before coming back right. Two short crowhops ensued as he flung a pass down the right sideline.

With a Texas A&M defender draped over his back, Johnson corralled the ball 37 yards away, in the front right corner of the end zone as he crashed past the pylon for a go-ahead score with 25 seconds remaining.

"I've never seen a stadium go from that loud to that silent," Harrell said. "... To be honest with you I think that kind of set the tempo for the next couple years of just, 'We're going to beat these guys because that's what we do.'"

A rivalry renewed in Starkville

Following Leach's dismissal as the head coach at Texas Tech after the 2009 season, the Red Raiders and Aggies met just twice more -- both of which were Texas A&M wins. Departing the Big 12 for the Southeastern Conference in 2012, Texas A&M hasn't played Texas Tech since the switch.

In the nine years since Texas A&M and Texas Tech last met, Texas A&M and MSU share a 4-4 record as conference foes, while MSU has won four of the past six contests and three-straight in Starkville.

Saturday, Leach will get his first crack at a Texas A&M program he's agitated for decades in hopes of extending his run of dominance over the Aggies in a new place, program and conference, though COVID-19 restrictions will likely limit any undergraduate campsites outside Davis Wade Stadium.

"Great games," he said Monday, reflecting on his past meetings at Texas Tech. "It's always exciting to play A&M."