Garrick Hodge: Mississippi State's offense has been as boring as it has been inefficient 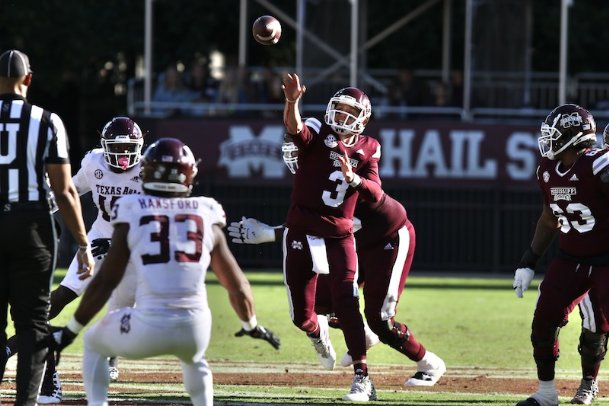 Quarterback K.J. Costello (3) and Mississippi State continued their struggles in Saturday's home game against No. 11 Texas A&M at Davis Wade Stadium in Starkville. Costello finished 15 of 22 passing for 99 yards and an interception, and the Stanford transfer was benched for freshman Will Rogers. Photo by: Mansel Guerry/Mississippi State Athletics

STARKVILLE -- Even the most optimistic of Mississippi State football fans weren't sure if the hiring of Mike Leach would work out for the Bulldogs.

But they at least expected the ride to be entertaining either way.

The offensive product on the field has been anything but since a win against LSU that feels like it came two months ago. Leach admitted after his team's 28-14 defeat to Texas A&M on Saturday he's never seen one of his teams struggle this much offensively in a three-week period.

A mind-boggling stat: MSU points scored against LSU, 44. Against Kentucky, Arkansas and Texas A&M: 30. Twenty-one of those were actually scored by offensive players.

"We looked like a bunch of pincushions," Leach said rather bluntly when describing his offense following MSU's third straight loss.

The news gets worse from there: The only thing that has matched the Bulldogs' offensive ineffectiveness has been their lack of watchability despite an offensive scheme that throws 60 times a game.

Take away one comically wacky MSU touchdown and the Bulldog faithful would have been better served napping through Mississippi State's latest blunder.

Despite utilizing an offensive scheme that only requires 3 seconds of protection for its quarterback to be successful, MSU's front five can't even provide that against a three-man pass rush. Texas A&M only sent three defenders after MSU's signal caller for a large duration of the afternoon, but six sacks later, the offensive line might as well have thought the Aggies were bringing an all-out engage eight.

"You need 3 seconds (for the quarterback), and that's not asking very much," Leach said.

Well, the bad news was his quarterback wasn't very good, either.

In fairness, K.J. Costello had pressure in his face all night, but the senior graduate transfer still underwhelmed enough to the point where he was benched in favor of a true freshman for the second straight week. Reading between the lines when listening to Leach, it doesn't sound like he's going to get a chance to lose his job for a third time when MSU faces Alabama in two weeks after a bye week.

There was no running game to speak of yet again, as the Bulldogs accumulated negative rushing yardage against the Aggies. A large portion of this statistic can be attributed to the number of sacks allowed, but there was nothing there all day.

Maybe a standout running back could have helped. Mississippi State has one of those in Kylin Hill, but for whatever reason, the Columbus native was unavailable. Not only was Hill not in uniform, but the SEC's leading rusher from a year ago wasn't even present at Davis Wade Stadium on Saturday.

While Leach's offense continues to sputter and "be behind where he hoped it would be," defensive coordinator Zach Arnett's defense continued to be the lone bright spot in an otherwise dreary afternoon. MSU's defense at least did ESPN's viewing auidence a solid and provided a defensive score that some talented video editor should supplement with a laugh track.

Emmanuel Forbes will forever thank his lucky stars after a football bounced off A&M quarterback Kellen Mond's wide receiver 10 yards in pinball style right into the defender's arms for a 60-yard touchdown return.

While A&M running back Isaiah Spiller torched the MSU front seven for 114 yards on 18 carries, Mond was held relatively in check, only passing for 139 yards on 23 attempts.

None of that made a difference, though, as the defense could only watch as its offense turned in three-and-out after three-and-out and turned the ball over for the 16th time in 16 quarters.

The good news is the Bulldogs now have a bye week to re-evaluate their program. The bad news is 1-4 is a near certainty with No. 2 Alabama looming in two weeks.

Leach said Saturday that program success doesn't happen overnight. But time is running out to see it at all in 2020.