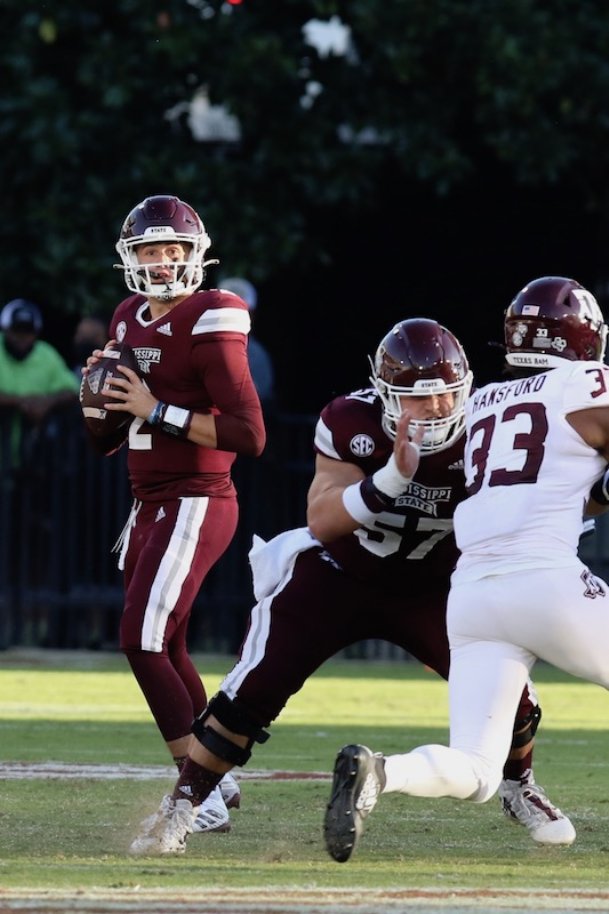 Mississippi State freshman quarterback Will Rogers drops back to pass against Texas A&M on Saturday at Davis Wade Stadium in Starkville. The Bulldogs lost 28-14. Photo by: Mansel Guerry/Mississippi State Athletics

STARKVILLE -- A season that began as a coronation for former Stanford signal caller K.J. Costello in the bayou has since devolved into a faceplant of epic proportions.

In a game overflowing with offensive misfires, it was the downfall of the Costello experiment and the ensuing insertion of freshman quarterback Will Rogers that offered brief glimmers of hope in an otherwise forgetful night for the Mississippi State offense in a 28-14 loss to No. 11 Texas A&M in Starkville.

"I look at Will as a young guy that has a lot of leadership in him," senior linebacker Erroll Thompson said postgame. "He's a great player. I expect that from him."

Weeks after being anointed the second coming of Joe Burrow in the stadium the LSU legend was born, Costello concluded his night a meager 15 of 22 for 99 yards, reminding onlookers of failures past.

On just the second drive of the afternoon, Costello undershot receiver Tyrell Shavers in the end zone on a play the two later discussed on the sideline in what looked to be a miscommunication. Poetically, Costello's final snap Saturday came as he raced to his left before being mauled by a gaggle of Aggies defensive linemen. Losing the football, which was recovered by the Texas A&M defense, split seconds before his knees crashed into the turf, Costello hopped from the grass at Davis Wade Stadium and yelled in frustration.

With Costello ineffective for the third straight week, Leach sided with Rogers with just over eight minutes remaining in the third quarter following the former's fumble inside the MSU 20-yard line. Clapping his hands together, the Brandon native received the snap, stepped and delivered a strike to a streaking Malik Heath for an 11-yard gain.

Braving Costello's missteps throughout the first three-plus weeks, the MSU faithful roared in approval courtesy of a smattering of ringing cowbells at the completion.

Crossing over from the third quarter to the fourth, Rogers remained in rhythm. He hit JaVonta Payton on back-to-back passes of 4 and 5 yards, respectively. A 13-yard connection with classmate Jaden Walley followed. So too did a 17-yard gain to Osirus Mitchell and a 10-yard deflected catch by Austin Williams.

Capping off the cadence-filled drive, Rogers fired his 13th pass of the night to Heath, who corralled the dart and raced 32 yards into the end zone.

"When you consider the quality team that A&M has, that drive Will had was maybe as good as I've had a freshman, especially a true freshman at his age, have before," Leach said.

Back on the sidelines, there was a noticeable shift in demeanor along the MSU bench upon Rogers' substitution. Arriving back near the metal bleachers near the offensive staff, Walley offered him a high-five, while others patted him on his back seconds after his first career touchdown throw.

Inches away, Costello sat perched along the aluminum bench alongside Mitchell. With his arms spread across the chair back almost lounging, there was a defeated look in his posture. In a season that began with highs of Heisman hype and national recognition, he'd been relegated to a clipboard for the second time in as many weeks.

Playing behind an MSU offensive line that leaked more frequently than a cracked pipe, Rogers' 15-of-18, 120-yard night bordered on immaculate given the Bulldog offense mustered just 217 yards in all. By contrast, Costello finished his day as the nation's leader in interceptions and ranking 51st of 69 eligible quarterbacks in yards per attempt.

Speaking with the media postgame, Leach revealed Costello and Rogers split first team reps throughout the week, but didn't offer much insight into whether Costello will remain the starter going forward. Heading into a bye week before a road date with No. 2 Alabama in Tuscaloosa, the 19th-year head coach did note the time off would allow him a chance to reevaluate the quarterback position.

"We'll just see what happens," Leach said. "We have to go out there and have two good weeks of practice and see where it's at. I did think Will showed a lot of composure out there."