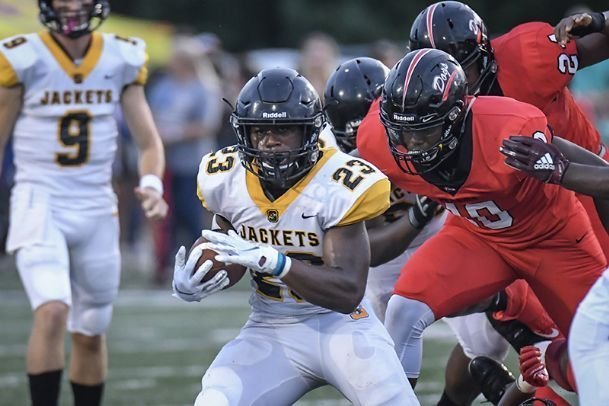 Starkville running back Amariyon Howard finds a hole for a gain against a stingy Brandon defense on Aug. 23, 2019. Photo by: Austin Frayser/Dispatch file

STARKVILLE -- The Starkville High School football team is shutting down for two weeks.

According to head coach Chris Jones, a handful of positive tests will force the Yellow Jackets (6-1) to forfeit their game against Warren Central scheduled for Oct. 30. WCBI first reported the news.

Under current guidelines, three positive tests is considered an outbreak. In a letter Athletic Director Greg Owen sent to parents that The Dispatch obtained, the school confirmed that five members of the varsity football team received positive tests. All members of the team will quarantine for 14 days beginning immediately.

Jones told The Dispatch on Tuesday night that a virtual coaches meeting is planned for Wednesday to discuss plans going forward.

According to the document, players will be clear to return to school and practice on Nov. 2 if they are fever and symptom free for at least 24 hours.

Should things hold as they are, the Yellow Jackets will next take the field Nov. 6 against Clinton. Starkville is currently ranked No. 5 in the state among all six MHSAA classifications and No. 4 in 6A following a loss last week to Madison Central.