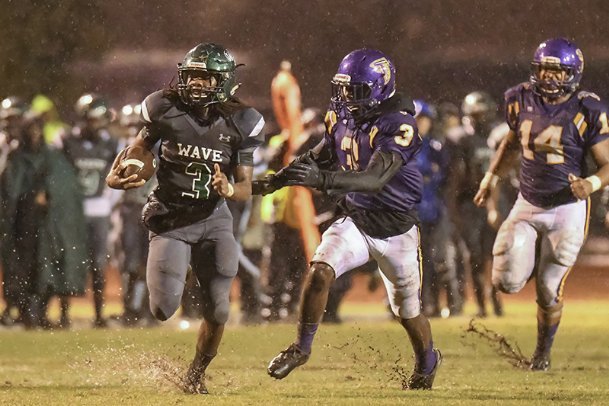 West Point's Jimothy Mays (3) looks for room past Columbus' Kam Jenkins (3) in the second quarter Oct. 25, 2019, in Columbus. The Green Wave will host the Falcons on Friday in West Point as both teams look to snap losing streaks. Photo by: Austin Frayser/Dispatch file photo

Inside the Green Wave head coach's office at the team's field house, where championship posters line the walls and signed footballs adorn bookshelves, it still feels odd to even raise the subject. But it's an unusual reality: West Point, the team that doesn't lose, has lost two straight and is currently out of the MHSAA Class 5A playoff picture.

"Our backs are against the wall," Chambless said. "Everybody knows it."

But despite consecutive defeats to Lake Cormorant at home and Grenada on the road in overtime, the Green Wave aren't stressed. They're not packing it in. And they're not in panic mode, either.

They've just gotten back to work, knowing that their final three regular-season games have greater importance.

"Our guys have done a great job this week of refocusing themselves," Chambless said. "There's been a renewed sense of urgency with our guys."

West Point will first put that to the test Friday when struggling Columbus (1-6) visits Hamblin Stadium. The Falcons have lost their past three games after beating New Hope 23-7 on Sept. 25, but coach Joshua Pulphus said he hopes to finish the season strong.

Turnovers in the red zone and a complacent defense cost the Falcons last week in a 28-0 home loss to Lake Cormorant, sending Columbus to 1-3 in Region 1-5A play. The Green Wave are a game above them at 2-2, while the aforementioned Gators, Grenada, Lafayette and Center Hill are all tied at 3-1. The top four teams make the playoffs, meaning West Point has some work to do if it wants to win a fifth straight Class 5A title.

But Pulphus pointed out that just because the Green Wave -- where he was an assistant in 2018 -- are having an off year by their superlative standards, they aren't objectively doing poorly.

Columbus, which went 4-7 in Pulphus' first season as head coach, would certainly take a West Point-caliber down season like 2020. The Falcons are "trying to get over the hump" after COVID-19 shortened their offseason and put them behind, and they've performed poorly in the fundamental areas where they need to be excelling, Pulphus said.

"I don't care who you are: If you turn the ball over -- fumble, interception, missed tackle -- you're going to get beat by anyone, not just the West Points," he said.

But West Point senior defensive end Jaquarius Thomas expects the Falcons to step up for a chance at a win against the 11-time MHSAA champion Green Wave. It's the way it's been for the past several years as West Point kept winning and its reputation got bigger, Thomas said.

"Just like any other team playing West Point, I know they're going to give us their best shot," he said.

Thomas said the Green Wave must "lock in" mentally and contain Columbus quarterback Ethan Conner to beat the Falcons on Friday. West Point has spy packages it can deploy to keep Conner from picking up yardage on the ground if needed.

"They have an athletic quarterback," Thomas said. "We have to be athletic with him."

"I've got a lot of faith in our offense," Cunningham said. "We can do it."

West Point faltered in its overtime possession against Grenada last Friday after the Chargers opened the extra period with a score. The Green Wave were stopped on fourth down to end the game, suffering their second loss in as many weeks.

"We just know we have to bounce back, stay humble, keep pushing and keep grinding so we can get there," he said.

Thomas had an admittedly bolder prediction: West Point will rebound by running the table in the regular season and winning in all four rounds of the playoffs to stretch its title streak to five.

"We're going to win these next seven and get home the gold ball," he said.

But getting off to a good start begins -- and could just as promptly end -- with Columbus, and the Falcons hope to keep West Point's slump going when the two teams meet Friday.

"We're just excited to get on the bus and go play football," Pulphus said.