West Point bounces back with 47-14 victory over Columbus 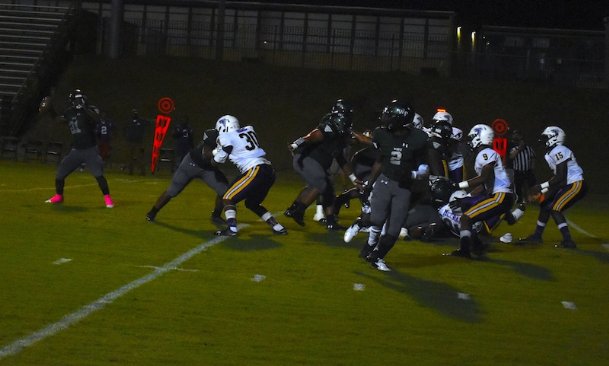 West Point running back JaKobe Pate (21) prepares to pass the ball to his teammate, Cameron Young (2), for a touchdown during Friday's game in West Point. The Green Wave beat Columbus 47-14. Photo by: Garrick Hodge/Dispatch Staff

The Green Wave have established a championship pedigree football program, and after back-to-back defeats at the hands of Lake Cormorant and Grenada, were determined to right the ship.

Coach Chris Chambless said he saw a different intensity level in practice all week, and it showed in a 23-point first quarter against Golden Triangle rival Columbus on Friday. West Point (5-3) scored the first 37 points of the contest and went on to a comfortable 47-14 victory over Columbus (1-7) at Hamblin Stadium.

"We had a great week of practice," Chambless said. "Our seniors did a good job of refocusing and letting last week roll off the back. We played well today."

After forcing a three-and-out on the Falcons' opening series, Green Wave quarterback Corbin Kelley connected on a 32-yard swing pass to JaKobe Pate on fourth-and-5 for the game's first touchdown.

On the ensuing defensive possession, Frederick McMillian blocked a Columbus punt that went into the end zone for a safety.

"We work extremely hard on special teams every day," Chambless said. "We put a lot of focus on that, and our guys really want to perform well in all aspects of the game."

West Point quickly took advantage of the free kick, cashing in another touchdown drive courtesy of a 5-yard scamper from running back Cameron Young.

"It feels good to get back on a roll, but that's the West Point way," Young said. "We had to come back and work harder; that's what we did all week."

After forcing another punt, West Point busted out its bag of tricks, tossing what appeared to be a sweep play to Pate. Instead, halfway to the sideline, Pate planted his feet, cocked his arm and found a wide-open Shawn Melton for a 35-yard touchdown pass to give his team a 23-0 lead.

Meanwhile, things went from bad to worse on the Columbus side after the Falcons fumbled the ensuing kickoff, giving the Green Wave another prime scoring chance.

"(Playing West Point is) a challenge because of the simple fact that we're still rebuilding," Columbus coach Joshua Pulphus said. "No excuses, but those guys know what it takes to win, from the lifting during the season to film preparation. They let two games slip, so we knew they were going to be ready for blood. But we just didn't match their intensity starting the game off. That's why the game got out of hand so fast. We have to be able to come out and play Columbus football from the beginning to the end."

In addition to running for 48 yards, Pate caught two touchdowns and threw for two, with one passing touchdown going to his backfield mate, Young.

"We feed off each other a lot," said Young, who finished with 57 rushing yards. "Me and JaKobe, the fullbacks, the quarterback, all of us. We couldn't do anything without the offensive line either."

Columbus quarterback Ethan Conner got the Falcons on the board with a 3-yard touchdown run before halftime, but CHS stared at a 44-7 deficit entering the break.

"Coach Chambless is the standard and has been here for 15-plus years and has a program established," Pulphus said. "They went through slumps as well, they didn't just start out winning state championships. They had to struggle and build their culture. That's why even after a loss like tonight, I'm proud of my boys because they came out here and fought still."

West Point is back in action against New Hope next week, while Columbus faces Lafayette on the road.