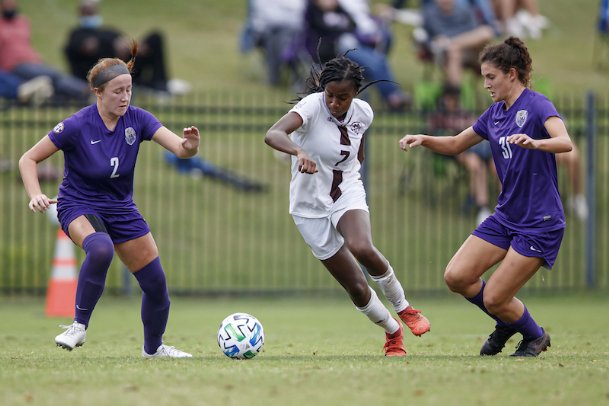 Mississippi State sophomore forward Onyi Echegini dribbles the ball through two LSU defenders Oct. 11 in Starkville. Echegini scored the tying goal in Saturdayâs match against Missouri as the Bulldogs and Tigers played to a 1-1 draw. Photo by: Mississippi State Athletics

STARKVILLE -- Onyi Echegini didn't even have to move.

As the Mississippi State sophomore forward raced into the penalty box, the cross from freshman KK Pavatt bent expertly toward Echegini. Perfectly placed, it bounced off Echegini's head and into the goal.

The beautifully executed play, just over 12 minutes into the second half of Saturday's match against Missouri in Starkville, tied things at 1-1 and energized the Bulldogs after they let up a goal in the final eight minutes of the first period.

"From that moment onwards, we kept going," Echegini said.

Mississippi State used its newfound momentum to hold off the Tigers (1-2-2) through the final 33 minutes of regulation and 20 minutes of overtime, securing a 1-1 draw that sent the Bulldogs to 2-1-3 on the season.

"I think either team could have won the game," Mississippi State head coach James Armstrong said. "Both teams had chances.

While neither did, Armstrong said he was happy with his team's performance, especially in the two 10-minute sudden-death overtime periods. Though ultimately they couldn't get clear for a goal, the Bulldogs had more chances than the Tigers did in extra time, Armstrong said.

"While we're disappointed not to get the result, I thought we had the big advantage in overtime," he said. "We didn't just quite get the final shot off -- the final bit of quality."

Still, Mississippi State rebounded from a 1-0 deficit and an injury to standout goalkeeper Maddy Anderson. In the 67th minute, Missouri's Julissa Cisneros slid into Anderson on a shot attempt, hitting the freshman keeper in the leg. Anderson was down for several minutes before being helped slowly off the field, and sophomore Hannah Pimentel replaced her.

Pimentel, making her debut, didn't record a save in the 21 minutes, 47 seconds she played before Anderson returned in the 78th minute, but the sophomore manned the goal well and turned away the Tigers when they got close.

"I think she did really well," Anderson said of Pimentel. "She definitely stepped up. As a group, we always talk about the 'next player up' and stepping up into that role, and she definitely did that tonight."

Armstrong credited his defense's performance in keeping the Tigers out of the net after Anderson returned and the match headed to overtime knotted at 1-1. Missouri got numbers forward several times but couldn't seem to manage a clean look.

It was a step up from the Bulldogs' performance in the first half, where Missouri's Macy Trujillo headed home a pass from Blythe Beckner in the 38th minute to take a 1-0 lead at the break.

"We probably didn't execute as well as we would like in the first half in terms of possession, but I felt we did better as the game went along," Armstrong said. "Our back line had to do a good job, just like their back line did."

Echegini's picture-perfect goal provided a spark less than 15 minutes into the second half, and the Bulldogs had answered. For the rest of the match, both teams sought the go-ahead goal, but neither could follow through.

Mississippi State will head into next Friday's match at SEC East leader South Carolina (4-1-0) with another point in the standings, but the Bulldogs know they had their chances for a better outcome

"Trying to get a tie was never in our minds throughout the whole entire game," Armstrong said.