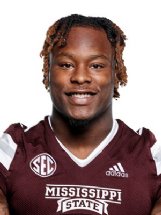 STARKVILLE -- Mississippi State running back and Columbus native Kylin Hill is reportedly planning to leave the team to prepare for the NFL draft.

Matt Zenitz of AL.com broke the news Tuesday afternoon Hill will likely opt out of the rest of the 2020 campaign in order to begin preparations for the NFL draft. The Dispatch reached out to Mississippi State over the matter and was told there was no update on Hill's status.

A source close to the situation told The Dispatch last week Hill would be suspended for the Texas A&M game, though it was unclear whether the suspension would continue beyond that one contest.

Sports Illustrated's Ross Dellenger reported Tuesday the suspension arose after Hill was involved in an outburst following MSU's loss to Kentucky on Oct. 10.

Monday head coach Mike Leach was asked about Hill's status with the team, responding that there was ""No update. He's still unavailable."

In three appearances this year, Hill totaled 15 rushes for 58 yards, while also notching 23 receptions for 237 yards and a touchdown through the air.

Hill also proved instrumental in changing the Mississippi state flag over the offseason, threatening to sit out the season should the Confederate battle emblem not be removed from the state banner. He was presented a key to the city of Columbus in July for his efforts.

It's expected MSU's running back duties will now fall to the freshman tandem of Dillon Johnson and Jo'quavious Marks. Through four games the pair has combined for 135 yards on 34 carries and another 144 yards on 34 receptions.

MSU is set to play No. 2 Alabama Saturday in Tuscaloosa. The Bulldogs have lost three straight contests since opening the season with a win over then-No. 6 LSU in Baton Rouge.