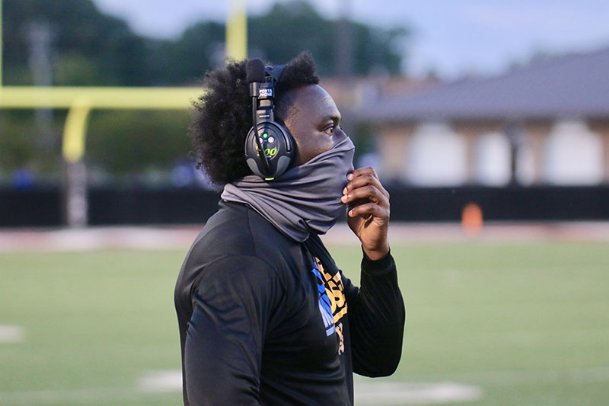 A former assistant under Chris Jones at Kemper County and Starkville high schools, Ray Westerfield has gotten his first chance to lead a football program. The first-year head coach at Kemper County, his alma mater, is making the most of it so far. The Wildcats are 6-2 and play Forest for the Region 5-3A title on Friday. Photo by: Courtesy of Ray Westerfield

As the eighth-grade football coach at Louisville, Westerfield taught Miller the important things about the position. How to throw. How to move his feet. How to lead a team.

Westerfield brought a "positive vibe" to the process, Miller said; the coach was just fun to be around.

"He's a good man on and off the field," Miller said.

Even then, Miller knew Westerfield could be a head coach someday.

Now, Westerfield is making the most of that chance.

In March, Westerfield took his first-ever head coaching job at his alma mater, Kemper County, where he'd been an assistant twice -- from 2009 to 2012 and under current Starkville coach Chris Jones in 2016, when the team went 15-1 and rolled to a state title.

So far, Westerfield, who went on to be an assistant under Jones again at Starkville, looks like he could be poised to deliver the same for the Wildcats. Kemper County -- featuring Miller at running back -- is 6-2 and will play for a district championship Friday at Forest.

A graduate of Kemper County in the class of 2006, Westerfield grew up in Preston, just outside of De Kalb.

But when he played football for coach Robert Wilson, the Wildcats just weren't very good. The school placed a much bigger emphasis on its standout basketball program than it ever did on football.

"The pedigree was there as far as athletes and having a winning mindset," Jones said. "Football wasn't as important."

After graduation, Westerfield worked to change that. He served as an assistant under current Shannon head coach Darryl Carter from 2009-11 -- including two winning seasons -- and under a new Wildcats coach in 2012, a 1-10 campaign.

With a psychology degree from the University of West Alabama, Westerfield took a job as a behavioral counselor at a K-12 school for students with autism in Newport News, Virginia. But the distance from his family back home was hard to take. The flights were long. The 12.5-hour drives were even longer.

So he came back to Kemper County in 2016 to be the wide receivers coach and co-offensive coordinator, along with Jones, as the two coaches formed a big brother/little brother relationship The Wildcats lost their first game to Columbus and star running back Kylin Hill, 26-12. Then they won the next 15 contests and the Class 3A title.

When Jones took over at Starkville High in January 2017, he wanted to bring Westerfield with him. But the only jobs available required a teaching certification. Westerfield didn't have one.

Instead, Jones recommended his former assistant to longtime Louisville coach M.C. Miller, on whose staff Jones had previously served. Miller listened, hiring Westerfield to be the Wildcats' wide receivers coach and recruiting coordinator.

The position left Westerfield in charge of plenty of head coaching responsibilities: making sure players' grades were in good shape, setting up travel, arranging meals and more. He felt like he was being groomed to take over the program.

But when Miller retired after the 2018 season, Noxubee County's Tyrone Shorter took the head job. So Westerfield joined Jones' staff at Starkville in a similar role to the one he'd had at Kemper County: passing game coordinator and wide receivers coach. For Jones, it was an "easy hire."

At first, Westerfield was quiet around the Yellow Jackets, according to Joshua Aka, a 2020 Starkville graduate now playing wideout for East Mississippi Community College. But after spending just a few days observing Starkville's pass catchers, Westerfield began to make them feel like the sky was the limit.

He stressed attention to detail, both in practice and games. He showed the Jackets' receivers how to catch, how to keep their pad level low. He encouraged staying after practice for extra catches. He advised anyone on the team -- not just the receivers -- on football and life.

Soon, Aka could tell: Westerfield was going to be a head coach.

But he didn't realize quite how quickly that would happen.

"I knew he had the smarts and the knowledge to, but I didn't know it was going to be so soon," Aka said.

Westerfield wasn't sure, either. He knew he was prepared. But was his alma mater?

"I knew how to build it and how to do it, but I wasn't sure if Kemper was ready for that or not," Westerfield said.

Kemper was. The school decided to hire him in February, and the move was announced in early March.

Senior middle linebacker Ishmael Naylor was glad to hear it. He'd been coached by Westerfield in eighth grade in 2016, and he knew Westerfield was from Kemper County, unlike previous coach John McKenzie.

"I was happy about it, because I knew he was from around here," Naylor said. "He pretty much knows everybody."

Right away, there were challenges. Less than a week after his hiring was announced, the COVID-19 pandemic delayed Westerfield's introduction to his program until summer, and he had to communicate via group texts and Zoom meetings with a team that went 3-8 in 2019 and then graduated 15 seniors.

But Westerfield got started right away, trying to get athletes who played basketball and other sports at the school to join the football team -- something Jones had done to great success -- and building relationships with his new players.

His efforts paid dividends. Kemper County won its first three games against West Lowndes, Raymond and Eupora -- all teams the Wildcats were projected to lose to. They won three of their next five, too, and now face Forest for the Region 5-3A title.

"We have some pretty good talent here," Naylor said. "I feel like as long as he stays, we're going to have a pretty good team."

Though Pulphus said college coaches could be beating down Westerfield's door soon enough, Westerfield -- always "in the moment" -- plans to stay in De Kalb for a while. There's work to be done.

"If and when we get all of our kids out who should be playing, I think we can roll the same exact way as we rolled in 2016," Westerfield said.