'When World War II ended, it wasn't as big a headline as we had today': Revisiting Mississippi State's 1980 upset of No. 1 Alabama 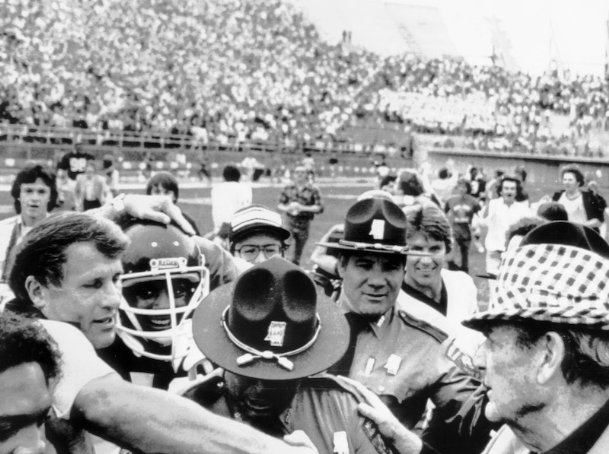 STARKVILLE -- On the morning of Nov. 1, 1980, it had been 770 days since a Bear Bryant-led Alabama team lost. It had been even longer since they fell to Mississippi State, a streak that dated back to the Eisenhower administration. But the Bulldogs had turned a corner under second-year head coach Emory Bellard.

A native of Luling, Texas -- a dot on the map 59 miles northeast of San Antonio -- Bellard spent 21 years coaching high school football in the Longhorn State. He later parlayed a five-year stint as the offensive coordinator at Texas into a seven-year spell as the head coach at Texas A&M.

On the practice fields, Bellard constantly reminded onlookers of his Texas roots.

A pioneer of the wishbone formation that made Bryant's teams at Kentucky, Texas A&M, and, ultimately, Alabama so successful, Bellard felt his 1980 squad had the pieces to contend against the sport's juggernaut.

"We've got the horses to really stop (Alabama)," he told his team, then 6-2. "... I know what I'm talking about, because I'm the only one that knows how to stop it, because I invented it."

Forty years to the week from Bellard's proclamation, MSU's 6-3 win over No. 1 Alabama marks the only time the Bulldogs defeated Bryant in his 25-year tenure in Tuscaloosa. And while the grainy film, aging newspaper clippings and fleeting memories of the 1980 victory grow fainter by the day, those who were there are constantly reminded of the afternoon David defeated Goliath.

"We beat Miami and Auburn and all those guys (that year)," quarterback John Bond exclaimed through a laugh. ".... But boy, they sure remember that one game."

Rick Cleveland nursed a pulsating hangover as he trudged to the press box at Mississippi Veterans Memorial Stadium in Jackson.

Then a 28-year-old MSU beat reporter for the Clarion-Ledger, Cleveland and his compatriots had partaken in a media dinner the night prior to the fullest extent. When dinner concluded, he and a handful of other writers bounced between establishments before closing the night in the Reservoir area of Jackson, where the bars stayed open until 4 a.m., to conclude their late-night shenanigans.

"We got to the game and we said, 'Well, at least this is going to be easy,'" Cleveland recalled. "We'd written that story about 100 times already -- 'Alabama beat the s--- out of somebody.'"

As Cleveland and his press corps consiglieres came to terms with a night composed of light beer and little sleep, hearts hung heavy along the MSU sideline.

On Friday afternoon, Bulldogs defensive lineman Glen Collins sat in his room at the Ramada Inn when his phone rang.

Walking down the hall, running mate Tyrone Keys heard a piercing wail emanate from the room. Earlier that day, Keys had heard what he was headed to tell Collins and presumed he'd just learned.

Collins' fiance and Keys' high school friend Kathy Brinston, 20, was found dead that Friday with a gunshot wound to the head.

"I don't talk about it a lot with people," Collins said, choking up with each ensuing word. "But that event changed my life going forward in a lot of ways. To this day, I've buried that memory so deep I don't even remember going to her funeral."

With Collins, Keys and the Bulldogs coping with loss on game day, Bryant stood in his familiar perch beneath the goalpost. Donning his patented houndstooth fedora, he clenched a play sheet in his right hand as he gazed toward the MSU side.

Opposite Bryant were a slew of Bulldogs with whom he had ample familiarity.

Bond, a highly touted freshman out of Georgia, had welcomed Bryant into his home on a recruiting visit months earlier. The pair even briefly traded pleasantries pregame before Bellard lassoed Bond back toward his own bench.

Keys and All-American linebacker Johnie Cooks had also been heavily recruited by the Crimson Tide. Longtime Bryant assistant Ken Donahue was incredulous when Cooks informed him he was choosing MSU over Alabama.

"Why are you going to Mississippi State?" Donahue asked. "They ain't ever going to beat (anybody)."

As clanging cowbells enveloped the stadium, a record crowd of 50,891 watched the Bulldogs and Crimson Tide trade defensive blows.

The game was scoreless until Alabama kicker Peter Kim drilled a 49-yard field goal on the final play of the first half to push the Crimson Tide ahead 3-0.

MSU kicker Dana Moore hit a 37-yard field goal of his own to even things up just over three minutes into the second half. Moore's second kick of the day, a 22-yarder, earned the Bulldogs a 6-3 lead with 11:59 left after the MSU offense stalled in the red zone.

As Bellard prognosticated, the Bulldog defense thwarted Bryant's vaunted rushing attack headlined by All-American running back Major Ogilvie. So confident was MSU, Keys turned toward Bryant on a fourth-and-short and dared him to go for it.

With MSU leading and less than 30 seconds remaining, Alabama lined up in the wishbone at the Bulldog 3-yard line. Faking the handoff to the fullback, Crimson Tide quarterback Don Jacobs ran right and was driven into the turf by Keys, who knocked the ball loose.

As the fumble momentarily danced around the grass, defensive end Billy Jackson fell on top to give MSU possession.

"My job was to crash and just hit the quarterback before he could pitch the ball," Keys said. "It happened just like it was drawn up."

Trotting out to the 1-yard line, Bond called for a kneel. Noticing an Alabama linebacker hovering over the ball, he yelled toward center Kent Hull. Hull shrugged his shoulders, unable to hear Bond over the crowd.

On the snap, the Crimson Tide linebacker swatted the ball, flipping it behind Bond, just shy of the goal line. Shouting out in hopes a teammate recovered, Bond was greeted by the high-pitched voice of running back Don Ray King.

An eerie hush fell over the Alabama crowd. For the first time in nearly three years, Bryant had lost.

Seated in the back left corner of the locker room postgame as Coca-Cola was strewn about in celebration, Bond watched as a pair of Alabama highway patrolmen entered the raucous scene.

What had been a melancholy and riotous tone turned silent. The screeching of a fold-up chair dragging along concrete filled the void. A houndstooth fedora pierced the air space above the lockers. College football's omnipotent leader had entered the room, and he had something to say.

"Now look don't let any of these fellas out here fool you," Bryant said referencing the gathered reporters. "Y'all beat us today."

Bryant's words aside, the momentous win wasn't lost on those attending in a professional capacity. Gathering on the patio of a Jackson bar the following day, Cleveland and a collection of sportswriters who'd covered the game traded thoughts on the upset.

Recognizing the band of local scribes, a passerby MSU fan told the group, "The headline would've been a lot bigger if it had been Ole Miss, not Mississippi State."

Every now and then, Bond is asked about the win. Currently the head coach at St. Joseph Catholic in Madison, referees' meetings ahead of Friday night contests usually serve as his pulpit for reflection. His sermon? How the Bulldogs slayed The Bear.