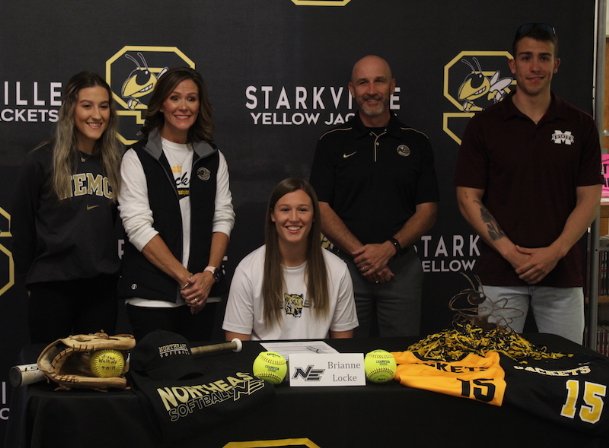 STARKVILLE -- Greg Owen was impressed by Brianne Locke before he ever knew her name.

When Owen, Starkville High School's new athletic director, made it out to a softball practice, he watched the team practice relays and turns from the outfield.

One middle infielder, Owen noticed, stood out. Her glove action and ability to field short hops was a cut above.

"Man, there's something about her that's a little different," Owen thought to himself.

Owen checked with Yellow Jackets coach Ronald Campbell and found out that the standout player was Locke, a star shortstop and pitcher. It was his first introduction to the senior's talent.

On Friday, the athletic director told the story of his first look at Locke in front of those assembled -- the senior's family, friends, teammates and coaches, who had come to watch Locke sign her national letter of intent to continue her softball career at Northeast Mississippi Community College.

"There's no misunderstanding of why we're here today: to celebrate your accomplishments and the things that you've done," Owen told Locke just before she affirmed her commitment to the Tigers.

In her five years playing for Starkville's slow-pitch and fast-pitch softball teams, Locke has done plenty. She's a strong shortstop who pitches effectively and has often been asked to play outfield when needed, Campbell said -- whatever the Jackets require.

"She works hard," the coach said. "She's dedicated to the sport. She does a great job. I'm probably more excited than she is because I'm kind of anticipating what it is that she's going to do when she gets there."

Locke said she had two other offers and planned to commit elsewhere when she scheduled a visit to Booneville to see the campus. She loved the Tigers' new facility, and her mind was changed.

During a soccer practice in mid-January, Locke -- who plays the sport during the winter before softball in the spring -- informed assistant coach Abby Phillips she was expecting a call from Northeast assistant coach Kevin Connell. She stepped to the side to tell Connell her decision.

"'I'm grateful for this opportunity,'" she told an equally grateful Connell. "'I would like to commit today.'

She walked back to the soccer field to congratulatory cheers from her teammates.

"It was just a good time," Locke said.

Locke will focus on middle infield at Northeast, Campbell said, and she hopes to take the time to perfect the craft before heading to Booneville next year.

And after being able to play just two games her junior season because of COVID-19, Locke has a second hope for 2021.

"Lord willing we get to play," she said.

If the Jackets do get to take the field, Campbell said he expects further improvement from Locke -- something the sixth-year coach has seen season after season.

The coach recalled when he was first told about a talented pitcher playing in the Starkville rec softball league. It was Locke, headed into seventh grade, and Campbell confirmed her skill. Even then, he could see what was to come.

"I kind of figured that we would be here where we are," he said.

Ever since then, Locke has continued to develop -- her power has already progressed to the point where she's hitting three to five home runs each batting practice -- and has grown into a leader on the team.

Campbell said he expects her development to continue into her collegiate career.

"Congratulations, Brianne," he added, turning to Locke. "You deserve this."